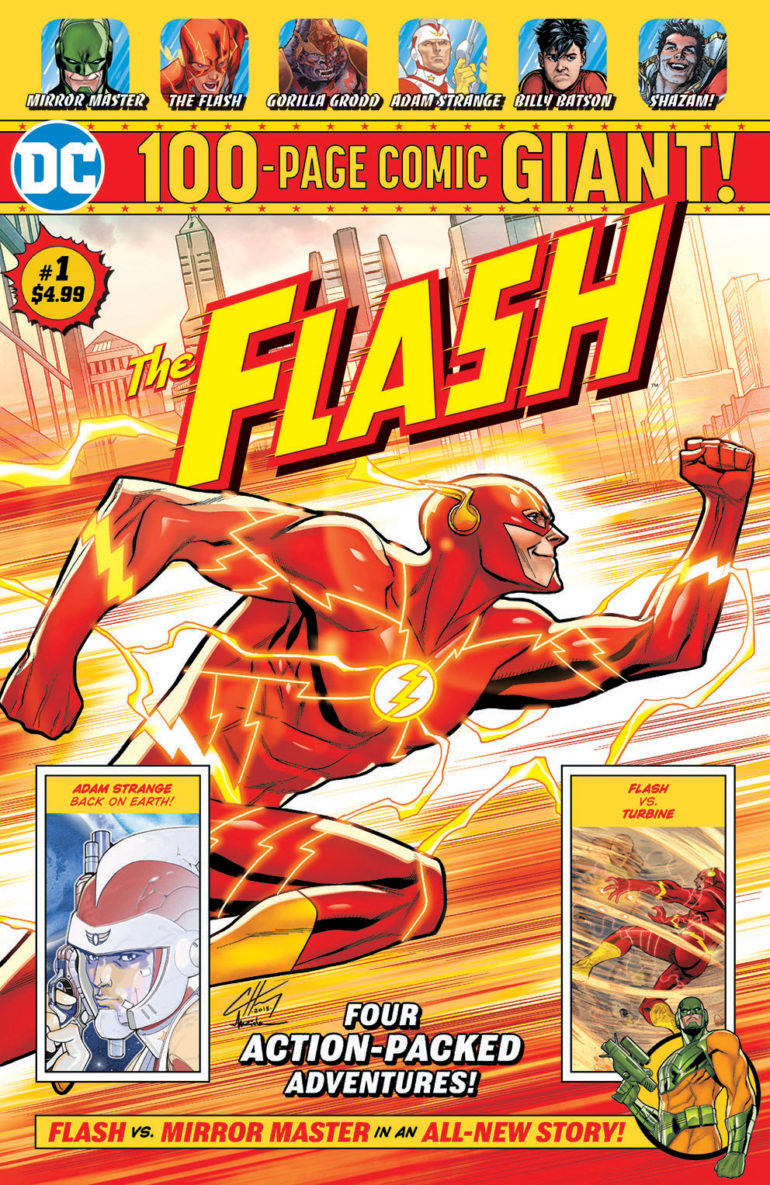 Giant sized were a common sight in the golden and silver age of comic book collecting. Nowadays it not as common but DC hopes to change that with a new exclusive line of giant-sized books being sold exclusively at Walmart.

Each giant sized book will cost $4.99 and will be 100 pages with cover art from some of the best in the business and a combination of new and old stories. Check out the four covers below as well as the press release

DC REVEALS NEW ADDITIONS AND CHANGES TO LINEUP OF

Line Expands to Six Titles with SWAMP THING, THE FLASH

All Titles in Participating U.S. Walmart Retailers by February 17, 2019

BURBANK, CA and BENTONVILLE, AR – (January 17, 2019) – DC announced today that it is bolstering its successful relationship with Walmart by introducing new titles, increasing the publisher’s slate of 100-Page Giant comics from four to six. In addition, two titles from the original lineup will be re-titled and renumbered as #1 issues. All titles, including the SUPERMAN 100-Page Giant featuring Tom King with Andy Kubert and the BATMAN 100-Page Giant featuring Brian Michael Bendis and Nick Derington, will arrive in participating U.S. Walmart retail stores by Sunday, February 17.

Additions to the lineup include the SWAMP THING 100-Page Giant #1 and THE FLASH 100-Page Giant #1. As with the other Walmart titles, each book will retail at $4.99 and combine new original stories with “flashback” content from popular DC story eras such as DC Rebirth, the New Age of Heroes and the New 52. “DC has been incredibly successful in attracting new readers through its relationship with Walmart,” said Nancy Spears, VP, Mass Book, Digital Sales and Trade Marketing. “These two titles are the perfect extensions to the Walmart line, given the successful Flash tv show and the popularity of last October’s SWAMP THING HALLOWEEN HORROR Special.”

The debut issue of the SWAMP THING 100-Page Giant includes an original story, “Desert of Ash,” written by Tim Seeley (NIGHTWING, GREEN LANTERNS), with art by Mike Perkins (GREEN LANTERNS, THE CURSE OF BRIMSTONE ANNUAL). This 12-page tale features Swamp Thing and his witch companion Briar as they face the pyromaniac Char Man, who possesses the ability to control flames, a power granted by the elemental spirits of fire itself. Issues #2 and #3 feature “Bog of Blood,” a two-parter by Seeley with art by Joëlle Jones (CATWOMAN), which introduces a terrifying and potentially supernatural slasher stalking the swamps of Louisiana.

THE FLASH 100-Page Giant #1 features an all-new tale of the Scarlet Speedster, written by Gail Simone (BIRDS OF PREY, SECRET SIX, PLASTIC MAN) with art by Clayton Henry (BLACK LIGHTNING: COLD DEAD HANDS). In the 12-part arc “Glass Houses,” Barry Allen is dedicated to keeping the streets of Central City safe as the Fastest Man Alive. But when his old foe Mirror Master shows up looking to cause trouble, it’s up to the Flash to stop him. This book also debuts classic tales of the New 52 version of the Flash by Francis Manapul and Brian Buccellato, in addition to the spacefaring adventures of Adam Strange from 2004 by Andy Diggle and Pasqual Ferry, plus the classic New 52 “rebirth” of the World’s Mightiest Mortal, Shazam, from Geoff Johns and Gary Frank.

Both the JUSTICE LEAGUE OF AMERICA and TEEN TITANS Giants will retain their same contents but continue with new cover titles and will be renumbered with #1 issues. The JUSTICE LEAGUE OF AMERICA 100-Page Giant becomes WONDER WOMAN 100-Page Giant #1, continuing the original Wonder Woman story by Amanda Conner, Jimmy Palmiotti ,Tom Derenick and Chad Hardin, with “flashback” stories from Geoff Johns’ New 52 JUSTICE LEAGUE and AQUAMAN, plus 2006’s “Who Is Wonder Woman?” by Allan Heinberg, Rachel Dodson and Terry Dodson.

The TEEN TITANS 100-Page Giant continues as TITANS 100-Page Giant #1, with BATMAN BEYOND writer Dan Jurgens continuing his original story with art by Scot Eaton and Wayne Faucher. In addition, the book will continue the ongoing reprint stories from Geoff Johns and Tom Grummett’s TEEN TITANS from 2004, Peter Tomasi’s SUPER SONS from 2017’s DC Rebirth and Kenneth Rocafort, Dan DiDio’ and Max Raynor’s SIDEWAYS from the New Age of Heroes.

Each 100-page comic sells for $4.99 and are available in more than 3,000 participating Walmart retailers in the United States. To find the one nearest you, use the Walmart store finder.

About DC Entertainment
DC Entertainment, home to iconic brands DC (Superman, Batman, Green Lantern, Wonder Woman, the Flash), DC Vertigo (Sandman, Fables) and MAD, is the creative division charged with strategically integrating across Warner Bros. and WarnerMedia. DC Entertainment works in concert with many key Warner Bros. divisions to unleash its stories and characters across all media, including but not limited to film, television, consumer products, home entertainment and interactive games. Publishing thousands of comic books, graphic novels and magazines each year, DC Entertainment is one of the largest English-language publishers of comics in the world