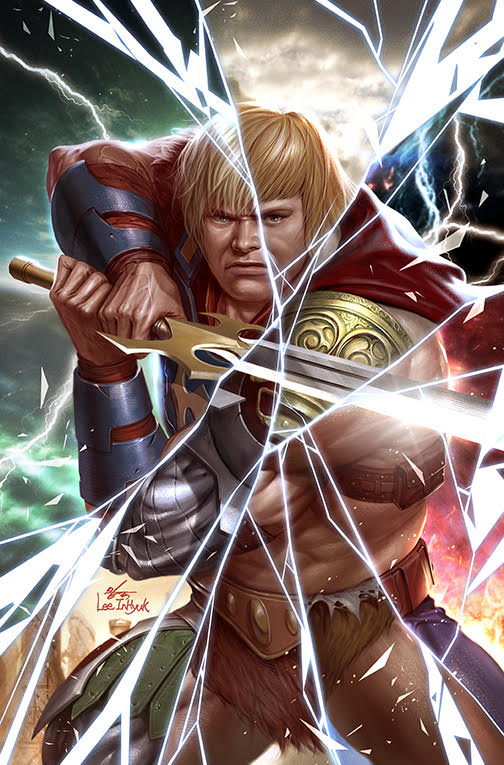 He-Man has been in the news a lot these few weeks and in addition to the new animated series and live-action movie coming your way DC and Mattel announced a brand new comic series called He-Man and the Masters of the Multiverse. This six-issue limited series will arrive in November and will find He-Man and his allies having to work with Prince Keldor to stop a massive threat to Eternia and it's people across the multiverse.

Keldor is the alter ego of Skeletor and He-Man aligning with his arch-nemesis will surely make for an interesting story especially given the history between He-Man and Skeletor. Check out the covers and art below as well as a press release with more info related to the upcoming miniseries.

BURBANK, CA and EL SEGUNDO, CA – (August 19, 2019) – As announced at a recent panel during Power-Con in Anaheim, CA, DC and Mattel are teaming up once again to chronicle new adventures of Eternia’s greatest champion in HE-MAN AND THE MASTERS OF THE MULTIVERSE, a six-issue limited series debuting in November. Writer Tim Seeley, artists Dan Fraga and Richard Friend, along with cover artist Inhyuk Lee join forces to tell this tale of heroes making their last stand to protect their kingdoms against an impossible threat. In their desperation, they’re forced to risk their futures by reaching out to an unlikely and potentially dangerous ally.
“The Masters of the Universe franchise continues with the all-new comic book series, He-Man and the Masters of the Multiverse,” said Rob David, VP of Mattel. “With multiple He-Mans working together from different dimensions to save the multiverse, this series created in partnership with the expert writers and illustrators from DC Comics will be sure to delight new and old fans alike, while adding an entirely new dimension to the Power of Grayskull.”
The scourge of Anti-Eternia is unleashed on the Multiverse bent on utter destruction. Each version of Eternia has fallen in the wake of his devastation as he steals its power and grows stronger. Now it’s up to a rag-tag team of surviving He-Men from across the multiverse to stem the tide, but to do so they’ll have to recruit the one man in existence that might help them win: Prince Keldor, the man who would be Skeletor!
“DC has had a long-standing and exciting partnership with Mattel in bringing the adventures of He-Man to comics and our fans,” said Hank Kanalz, SVP, Publishing Strategy and Support Services. “DC also knows what it means to showcase characters from across its own multiverse; I’m looking forward to seeing the different iterations of He-Man and other Masters of the Universe characters in this series.”
On sale November 20, this 32-page debut issue also features a variant cover by interior artist Dan Fraga and is priced at $3.99.
For more information about Masters of the Universe visit the website at www.mattel.com. For more information on the World’s Greatest Super-Heroes, visit the DC website at www.dccomics.com, the DC YouTube channel or follow @DCComics on social media.
About DC
Home to iconic and globally recognized Super Heroes Batman, Superman, and Wonder Woman, DC is one of the largest English-language publishers of comics in the world and a creative unit of WarnerMedia, publishing thousands of comic books, graphic novels, and magazines each year. Founded in 1934 with the launch of Detective Comics, DC is charged with strategically integrating its stories and characters across Warner Bros. and WarnerMedia properties.
About Mattel
Mattel is a leading global children’s entertainment company that specializes in design and production of quality toys and consumer products. We create innovative products and experiences that inspire, entertain and develop children through play. We engage consumers through our portfolio of iconic franchises, including Barbie®, Hot Wheels®, American Girl®, Fisher-Price®, Thomas & Friends® and MEGA®, as well as other popular brands that we own or license in partnership with global entertainment companies. Our offerings include film and television content, gaming, music and live events. We operate in 40 locations and sell products in more than 150 countries in collaboration with the world’s leading retail and technology companies. Since its founding in 1945, Mattel is proud to be a trusted partner in exploring the wonder of childhood and empowering kids to reach their full potential. Visit us online at www.mattel.com.