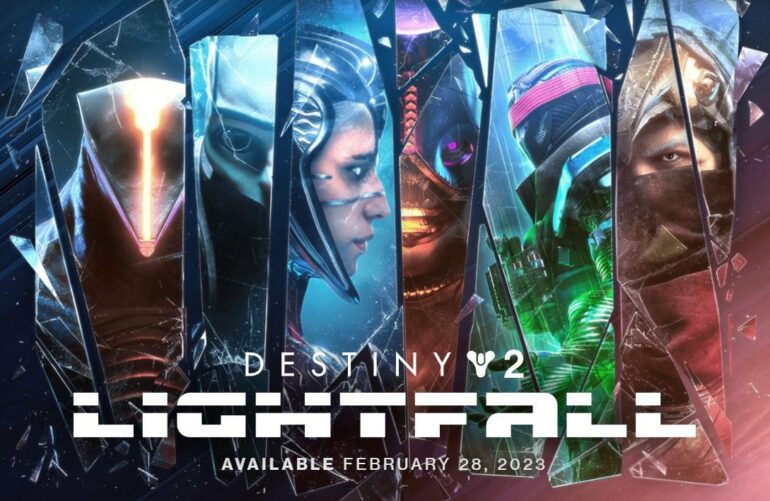 The Witness is here, and the Darkness is quickly approaching. But much has changed this time around in the Destiny 2 universe. Destiny players will embark into a techno cyberpunk-style world filled with new enemies, new exotics, an ambitious legendary campaign, and a new subclass called Strand.

It's the final showdown in the battle of light vs. dark.

Three versions of the game will be available pre-launch. An annual pass edition will include Destiny 2 Lightfall expansion and 4 accompanying seasons and a Lightfall dungeon key.

A Destiny 2 Lightfall Collectors Edition was also announced available on the official Bungie Store in addition to the Lightfall standard edition version (excluding the season pass). Veteran Guardians and new players will play the latest expansion this February. But the fun does not have to end there. Check out the Kings Fall raid, live now in Destiny 2 Season of Plunder. Destiny 2 is also now available on the epic games store and this includes Lightfall.

Destiny 2 Lightfall launches with a new legendary campaign on Neptune

Destiny 2 Lightfall will bring an epic new story to the Destiny 2 universe. Joe Blackburn, Game Director of Destiny, proudly proclaimed, “This is the end. This is Lightfall,” ushering in a new chapter that is promising to change everything.

The enemy forces and the sinister Witness, a mysterious humanoid villain, is coming with a new powerful disciple, Calus, on a mission to destroy humanity and The Traveler as we know it. The next collapse is imminent, and the player is called upon to save humanity once again.

It's about “creating the best shooter campaigns in the industry” and “creating an adventure in a crafting world full of surprises,” said Joe Blackburn.

Joe Blackburn and Justin Truman from Bungie discuss Destiny 2 Lightfall during the Destiny 2 Showcase on August 23, 2022.

A new Destination arrives in Destiny 2 Lightfall with a bright neon techno cybernetic metropolis known as Neo Luna, a first for the Destiny 2 franchise in terms of theme, style, and narrative direction.

Guardians will travel to Neo Luna, the capital city of Neptune. This city is filled with techno-inspired flair, mysteries, and cybernetic sculptures. Think of bright lights, technology, office buildings, a harbor, and even an arcade. This really does give off cyberpunk and saints row vibes.

Deep within the heart of Neo Luna lies a dark power called Strand, protected by the Shadow Legion Cabal and a new enemy race called Tormentors. Strand is a grapple hook type ability that allows your Guardian to grapple and glide onto nearly anything, changing the way your hunter will traverse. But it also wields power, force, and a deadly punch, unlike anything we've seen before.

Strand will also introduce a first for the Destiny franchise, making this new subclass available for all characters in Destiny 2: Lightfall (Hunters, Titans, and Warlocks). Hunters get a deadly whip rope, Titans get a powerful claw, and Warlocks will get to unleash fury with solar-charged explosive knives.

The Witness reprises Calus and his Tormentors

The Witness, a voice of Darkness and leader of the Black Fleet, comes to take the Traveler and destroy the universe in Destiny 2: Lightfall, bringing waves of large evil Tormentors led by the reprised Calus, and the evil cloud striders. Planted in the mysterious metropolis is Calus's ship witnessing a city under siege with adventures, loot, and enemies throughout.

The Shadow Legion Cabal packs a punch with a strong characteristic of overpowered warriors enhanced by the powers of pyramid technology.

Guardians are called upon to discover the mysteries The Witness is hiding and unravel the mysteries that lie deep within the heart of Neptune. A new raid has also been confirmed by the Bungie team, bringing a challenging new 6-person activity with boss battles and loot within.

Promotional materials for Destiny 2: Lightfall display several new and returning characters, including Calus (from Destiny 2, Leviathan Raid) and Osiris (from Destiny, Rise of Iron). Elsie Bray is also rumored to make her long awaited return to Destiny 2 since Warmind expansion.

Bungie unveiled several welcoming features that promise to enhance to Destiny experience. These new features include new mods and a loadout manager. You will also get Guardian Ranks, Commendations, new in-game Looking for Groups system. The team also announced a significant shift in how future content releases are planned.

In previous years, Bungie sunset older content, removing campaigns and destinations from past expansions. Bungie confirmed that future expansions would no longer be sunset or removed from the game, thanks to advances in their core engine and systems with the release of Lightfall.

First, there's Loadout Manager for Destiny, a way to manage your in-game items and inventory directly in-game. For years, Destiny players relied on third-party applications like Destiny Item Manager and Little Light for Destiny 2 to manage their inventory. This new system promises to unify the overall experience. According to the Bungie dev team, “The new mods and loadout manager coming with Destiny 2: Lightfall will allow you to create and save a build in a single place.”

Guardian Rank will bring a new reputation system to Destiny 2: Lightfall . Commendations offer Guardians a new way to feel appreciated and share the wins of other Guardians. At the end of each match, you will get a chance to rank fellow players in terms of worthiness, helpfulness, and leadership.

While Bungie was vague about sharing too many details during the Destiny 2 Showcase, the team confirmed that a Fireteam Finder tool would launch sometime in 2023. The tool will allow Guardians to find other players to match make with, find help, and make friends in Destiny 2 easier than before. The best part is this all can happen in-game.

In conclusion, Destiny 2 expansion, Lightfall will bring many welcoming additions to the Destiny 2 experience, a new Destination, a legendary campaign, and a new Raid and abilities that will change how we play and enjoy Destiny. This seems like a significant shift in direction and theme for Destiny, entering a techy cybernetic metropolis that promises to bring new adventures, stories, and plunder for all Guardians to enjoy this February.

Bungie, owned by Sony Interactive Entertainment, also announced a partnership with Fall Guys, a new Fortnite island and brings the entire Destiny experience for PC to the epic game store. The exclusive collector edition will also include a 8 pouka replica figure wielding new dark powers and secrets to uncover. A Lightfall digital soundtrack will also included with all Collectors Editions of the game. Lightfall will be the last major expansion before Destiny 2 Final Shape.