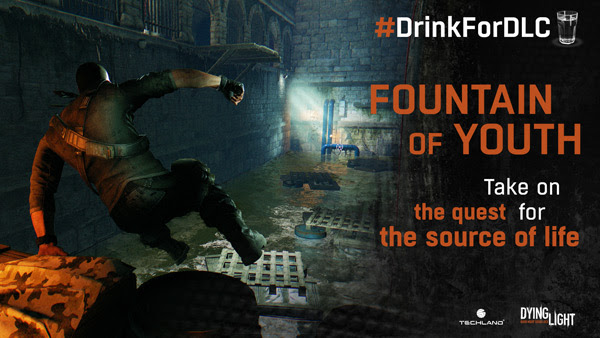 Dying Light has been a huge success for Techland in 2015 and they  continue to show their thanks to the fans. Due to the massive amount of support shown towards their #DrinkForDLC campaign, Techland has decided to give a new DLC pack to Dying Light fans, absolutely free. On February 9, 2016, whether you are buying the game for the first time or already have it, along with the update that will give players “Dying Light: Enhanced Edition,” there will also be a new content pack introduced called #DrinkForDLC. Techland's original campaign for the hashtag was to have people drink more water and stay hydrated so the content is also water-themed. Expect two new parkour challenges centered around water along with the Water 2.0 blueprint. This new throwable weapon will enhance the electrocution properties of other weapons. The most important part of the DLC (in my opinion) is the new exploration quest called “Fountain of Youth.” I think this is big just because most players will be getting “The Following” content on that day and now Techland is giving us even more gameplay on top of that. Remember that whether you are already set for February 9 and will spend nothing or if you buy the game for the first time at $59.99, the #DrinkForDLC content is free.