Dying Light Wants You To #TweetForSpeed! 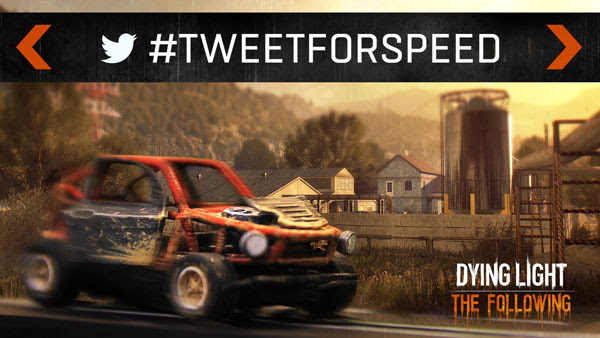 Dying Light is Techland's baby right now. Despite the fact that it turns a year old next Wednesday, Techland continues fueling the hype train. This of course is in anticipation of the February 9th release of Dying Light: The Following Enhanced Edition. One of the longest titles in video games will offer a huge overhaul to last year's survival horror hit. One of the enhancements is a playable map that is larger then the entire original playable area of Dying Light. This one map will be larger than the two of the original game, combined. Techland has decided to make a little game out of revealing this map to fans. Utilizing their pages on both Twitter and Twitch.tv, Techland is slowly defogging the map of The Following. If you go to their Twitch page, this is what you would see (as of 12:20 AM, 01/21/2016):

Notice the two cars on the track and the map in the upper right corner. Every time they complete a lap, a block is added to the map. To make the cars move forward, fans have to head to Twitter. Just tweet to @DyingLightGame whatever you want to say and add the hashtag #TweetForSpeed. Tweet as frequently as you want. The program started yesterday and the map is already 24% complete! I suspect we will be able to see the full map of Harran's outback before the weekend. The map is interactive so there are even points of interest to click on that will show you in-game locations. That is enough talk, I want to get this Dying Light map uncovered so I am off to the Twitterverse!