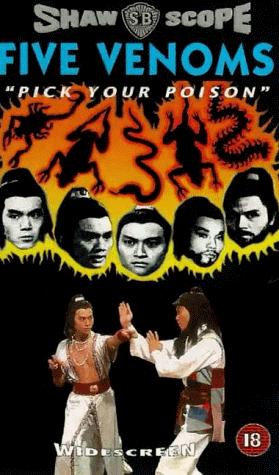 If you watched kung-fu films on channel five back in the late '80s, you have probably heard of the Shaw Brothers Studio and have surely seen their films. I can discuss many memorable films, but I want to touch on my personal favorite, the Five Deadly Venoms. This 1978 classic was one of the first Shaw Brothers films that I saw when I was a kid, and it, along with Enter the Dragon, fueled my love of martial arts. The cast of Five Deadly Venoms became known as the Venom Mob and appeared in numerous films, many considered kung-fu classics in many circles.

There are many excellent fights in Five Deadly Venoms but the one we're referencing this week is the final fight with Yang Tieh the final poison clan student and poison clan member Lizard facing off against fellow poison clan members Snake, Centipede, and Scorpion. If you have never seen the film and intend on seeing it I recommend checking it out so nothing gets spoiled for you.

While I was never a fan of Chiang Sheng's comedy he knows how to put together a great fight alongside his fellow Venom Mob castmates. The Five Deadly Venoms is incredibly nostalgic for me on a personal level and takes me back to simpler times. The work that the Venom Mob did through this film and numerous others is remarkable and their contributions live on in modern cinema and among kung fu film enthusiasts.