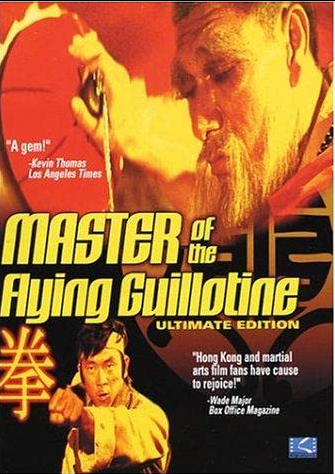 I have always had a soft spot for old school 70's and 80's kung fu films either because of the amazing choreography or the sheer cheese factor and while I have a massive mental catalog of films to showcase I felt this week we needed to pay homage to the classically cheesy but extremely entertaining Master of the Flying Guillotine. The film had a variety of cheesy and questionable things including an Asian man in brownface playing a yoga master in the vein of Dhalsim from Street Fighter and the blind monk and master of the flying guillotine wearing a swastika on his robes. Those weird moments were just a few of the noteworthy happenings in this film.

The fight we are looking at this week is the final battle between the one-armed boxer Liu Ti Lung ( Jimmy Wang Yu) and the blind flying guillotine master (Kang Chin) who has been killing one-armed men throughout the film. The blind master is on a mission of revenge against the one-armed boxer who killed the monk's disciples in the first One-Armed Boxer film. While the film's plot is all over the place and the martial arts tournament was just filler the final fight was over the top, cheesy but extremely memorable. Check it out for yourselves and let me know what you think.

You can expect to see more 70s and 80s kung fu classics in future columns including a lot of Shaw Brothers classics alongside some other cheesy films with great fights.

If you have a recommendation for this feature let us know. We'll see you next week with another Film Fight Friday