Fox Brings Lucifer, Minority Report, and Much More To SDCC 2015 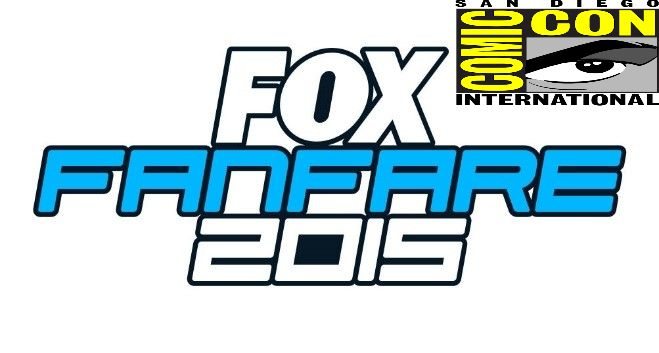 Fox announced their lineup for San Diego Comic-Con and fans can expect panels and premiere screenings for Lucifer, Minority Report and Lucifer plus established shows like Gotham, Bob Burgers, and Family Guy will have a presence as well. Make sure to hit up the Fox Fanfare booth to get your hands on all the great swag they're giving away. Here is the full schedule along with the panel, screening, and autograph signing schedule.

FOX gives fans the thrill of a lifetime with the SCREAM QUEENS Ultimate Scream Drop ride at Comic-Con!  Screams will be heard all over San Diego as fans drop 120 feet on this customized ride at the Petco Interactive Zone. Special cameras will capture fans’ screaming faces so they can share and post on social media. The Kappa Kappa Tau sorority sisters and their Dickie Dollar fraternity boyfriends will be at the ride, passing out SCREAM QUEENS-branded premium items. PLUS! Check out the exclusive SCREAM QUEENS “Devil Mirror” with fun shareable photos. Follow @ScreamQueens to find out when the SCREAM QUEENS cast will make appearances at the experience. Use #ScreamQueensDrop to join the conversation.

You scream, I scream, we all scream for SCREAM QUEENS. Cool off at San Diego Comic-Con this year at the bloody good ICE CREAM FOR SCREAM QUEENS carts. The Girls (and Boys) of Kappa House are dying for new pledges and will be stationed outside of the San Diego Convention Center Area passing out some free, devilishly good ice cream to all those who give them their best screams. Follow @ScreamQueens to track where the carts are located throughout the weekend. Use #IceCreamForScreamQueens to join the conversation.

“GOTHAM” – PENGUINS ON THE LOOSE

Oswald Cobblepot aka “The Penguin” has lookalikes everywhere, including San Diego Comic-Con. Keep an eye out for a mass Penguin breakout as Oswald Cobblepot look-a-likes waddle their way through the streets of downtown San Diego on Friday and Saturday, passing out free pairs of Oswald’s signature sunglasses. Follow @Gotham to track where the Penguins are stationed throughout the weekend and you might even meet The Penguin himself (aka GOTHAM star Robin Lord Taylor). Use #Gotham to join the conversation.

GOTHAM fans go gothic with the opportunity to pose in a special 3-D photo with their favorite series villains (The Penguin, The Riddler, Selina Kyle and Mr. Freeze, among others) at the Petco Interactive Zone. In addition to sharing their most villainous pose with friends and family – special GOTHAM-branded premiums will be giveaways through the day – and you never know which of your favorite actors from the series may stop by in person! Follow @Gotham to find out when GOTHAM cast will be making appearances at the experience. Use #Gotham to join the conversation.

THE X-FILES “X” will be placed in different locations around San Diego at Comic–Con. If you spot one, take a photo and tweet it out using #TheXFilesSDCC. Clues as to where to find the “X” will be tweeted out daily from @TheXFilesFOX Twitter handle on Friday and Saturday.

The FOX FANFARE Booth (#4229) will feature an incredible lineup of talent on the convention center floor for star-studded autograph signings and exciting booth activities, including distribution of the exclusive 2015 FOX FANFARE poster tubes, collectible mini-posters, premium giveaways and merchandise sales.

Drop by the FOX FANFARE booth (#4229) daily to pick up the 2015 FOX FANFARE Poster Tube, as well as Exclusive and Collectible Mini-Posters from BOB’S BURGERS, BORDERTOWN, FAMILY GUY, GOTHAM, THE LAST MAN ON EARTH, LUCIFER, MINORITY REPORT, SCREAM QUEENS and THE SIMPSONS, among other FOX FANFARE properties.

Limited edition giveaways will also be distributed from the booth (while supplies last):

Be one of the first to take a look at the new fall sci-fi action thriller! Based on the hit futuristic Steven Spielberg feature, MINORITY REPORT follows the unlikely partnership between a man haunted by the future and a cop haunted by her past, as they race to stop the worst crimes of the year 2065 before they happen. Join Stark Sands (“Inside Llewyn Davis”), Meagan Good, (“Think Like A Man” franchise, “Californication”), Wilmer Valderrama (“From Dusk Til’ Dawn”), Laura Regan (“Murder in the First”) and executive producers Kevin Falls, Max Borenstein and Darryl Frank for a special screening followed by a Q&A.

FRIDAY Autograph Signings at Booth #4229 (times to be announced at SDCC):

What would you do if you were the last person on earth? Join us for a Q&A panel discussion with star and creator Will Forte (“Nebraska,” “Saturday Night Live”), Kristen Schaal (“Bob’s Burgers,” “Flight of the Conchords”), January Jones (“Mad Men”) and director/executive producer Chris Miller (“The Lego Movie,” “21 Jump Street”), as they discuss the surprising twists and turns of the first season of the FOX hit comedy, as well as tease the upcoming second season.

A COMIC-CON FIRST! Seth MacFarlane will participate in a panel featuring sneak peeks at the upcoming seasons of FAMILY GUY and “American Dad!,” plus an exclusive look at BORDERTOWN, his newest animated project for FOX. MacFarlane will be joined by the casts and executive producers from each show, including FAMILY GUY’s Seth Green, Alex Borstein and Mike Henry, along with executive producers Steve Callaghan and Rich Appel; and BORDERTOWN’s Alex Borstein, Missi Pyle and Nicholas Gonzalez, along with executive producer Mark Hentemann.

SATURDAY Autograph Signings at Booth #4229 (times to be announced at SDCC):

Get ready to scream! It’s a Comic-Con horror fest when the casts of two of the fall’s most highly anticipated series come face-to-face (and hatchet-to-hatchet) for a can’t-miss panel. From FOX’s upcoming SCREAM QUEENS: the original “scream queen” herself Jamie Lee Curtis along with Emma Roberts, Lea Michele, Skyler Samuels, Abigail Breslin, Billie Lourd and Keke Palmer, as well as the cast of FX’s “American Horror Story: Freak Show” and the upcoming “American Horror Story: Hotel.” This lively gathering of headliners promises laughs, scares and secrets from the sets.

SUNDAY Autograph Signings at Booth #4229 (time to be announced at SDCC):

Please note that tickets for all signings will be available every day at 8:00 AM, for that day’s signings only, at the designated FOX location in the Sails Pavilion. Tickets are distributed via a raffle system and are limited in number. Line-up information and autograph signing times are included on the tickets.

Fans can also receive updated announcements and information from each panel, the press room and other activities throughout Comic-Con, by following these series and joining the conversation by using #FOXSDCC and other hashtags as noted below: