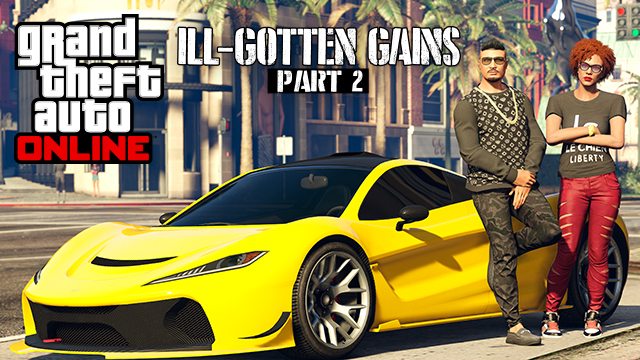 Happy Independence Week to all our U.S. fans out there and to those from other countries, you may still have reason to celebrate! Grand Theft Auto fans who misssed some of the Independence Day special content last year will get another crack at it next week during part 2 of the Ill-Gotten Gains Update. That means the fireworks launcher returns (confirmed) and you may get your hands on beer hats, t-shirts and other themed items as well. More to the point, Los Santos' big ballers will be excited to hear about the second installment of the Ill-Gotten Gains Update, which features new cars, new clothes and new weaponry. If you happen to be in my lobby, expect to catch some lead if you see me coming towards you. Even better, you might just fall under my tires as I roll through in this beauty, the Coil Brawler:

Nothing is safe once I get behind this wheel

For my more flashy felons, there is the Invetero BlackFin, a more classic style hot-rod. The racers will be all over the Progen T20. It is a little bit strange to see a new car company launch this late in the game's life, but you will want this car. The OG's will represent in the Vapid Chino which has an LSC plaque in the back similar to the Vagos-modded Vapid Peyote. Rockstar continues to add more futuristic looking bikes with the Dinka Vindicator. The creator of the “Ring Fight” and similar deathmatches that involve bare-knuckle brawling may or may not want to add the new knuckledusters into the mix:

If you can change those letters, I will lose my mind

There is a new boat called the Lampadati Toro and I want to be excited about it because it has a beautiful, all wood-grain finish, but there is really nothing to do in the water other than race. Regardless of your new ride, or rides, everyone is going to get their grubby little hands on the new Marksman Pistol. It looks like a baby shotgun and is said to be a very powerful, single-shot weapon. Updates usually hit consoles and PC on Tuesdays or Wednesdays so look for it when you start your game. Also, Rockstar has said there will be a weekend special next week just like with part 1 of the update. Get your money up this holiday weekend because it is going to get expensive next week!

Kim's got nothing on our style