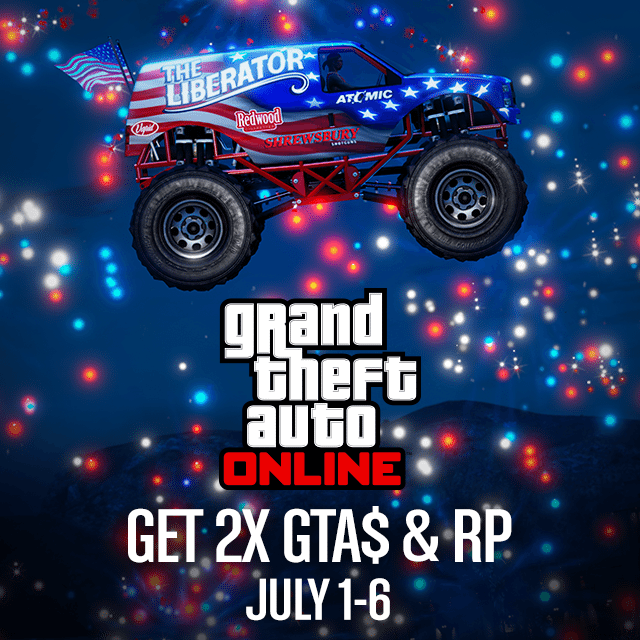 The new hardware comes next week, but a lot of people missed out on some of the old hardware from last year. For people like me that were away Independence weekend 2014 and for the new console and PC fans, this is great news! Starting today, you can get your hands on the Fireworks Launcher, Liberator monster truck and sovereign motorcycle as well as themed clothing and masks. To celebrate the birthday of the U.S. and to help get people ready for part 2 of the Ill-Gotten Gains Update, you can also take part in the Independence Day Online Event Playlist for double RP and double cash. The playlist is accessed when you are booting up the game, just hit the appropriate button indicated at the bottom of your screen (varies by platform). Members of the Rockstar Social Club can click the following links to get a preview of what is in the playlist:

Rockstar says that all jobs will also offer double RP from July 1-6 but mentions nothing of the double cash outside of the playlist. If any other missions offer double money, they will likely be marked as such as they were in part 1 of Ill-Gotten Gains. My character is down to about $4.5M right now after buying a bunch of new vehicles and weapons but I intend to change that starting today. If you see (Mental_Disabler) me coming your way, I suggest you run unless you are ready to ball 'til you fall!

SIDE NOTE: Anyone that needs help making money is free to add the above PSN tag. Just identify yourself as a fan of R.A.G.E. Works and I will accept the request. I play on PS3 and PS4, but can the best methods of making money legitimately are only on PS4.

P.S. (No disrespect to Canada or her people) To the people complaining that there are no Canada Day themed items or vehicles, perhaps you should remember that Cali is not a part of Canada. Here is a video to describe how the people of Los Santos generally feel about “Canada Day.”