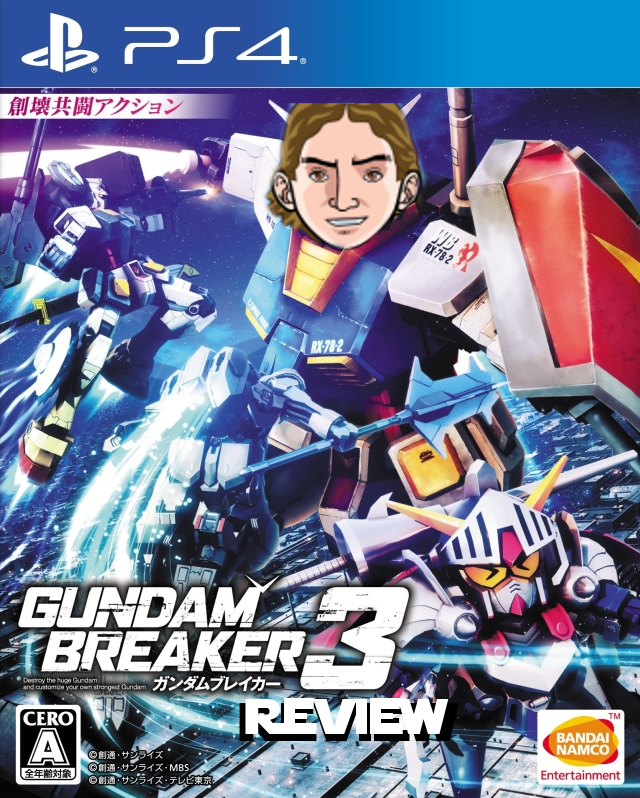 Gundam Breaker 3 was an $80 import, making it the most expensive standard edition of a game that I've ever purchased. I almost respect Bandai Namco for not bringing it to the states because they know fanboys like me, who live across the pond, will buy it for such a high price. I could have bought the basic sixty dollar edition in Japanese, but for an extra twenty, you get the game with English subtitles, which makes it actually playable. With such an exorbitant price, is GB3 a Gundam builders dream, or just a collection of broken parts?

Toys to Life or Shameless Advertising?

Let's get one thing straight, GB3 isn't about piloting giant mobile suits. In GB3, the game takes place in a virtual reality arena where you pilot Gundam toy models, also known as Gunpla. Sometimes, it feels like GB3 is just one giant advertisement. The paper thin story takes place in a hobby shop where they sell Gunpla, the main hub has videos of Gunpla, and the in-game store lets you buy full in-game Gunpla models. The box art that displays each Gunpla is the box art that Bandai actually uses in real life. So while it could be argued as being a shameless way to get you to buy more Gunpla, it's nice to know that the Gunpla you've been playing as can actually be bought and built in real life.

With all of the different Gundams in this game, it goes without saying that there are tons of customization options available. You can customize your head, torso, legs, arms, backpack, melee and ranged weapons. Many of these parts and weapons have exclusive abilities that cannot be used by any other piece. Thankfully, if you use the exclusive ability enough, you will “master” the ability, letting you use it with any part or weapon. That's GB3's strongest point. You're always getting stronger parts, mastering abilities, and tricking out your Gundam in between. There are legitimately so many customization options that it sometimes becomes overwhelming. You can make a lot of Gundams that have wildly different stats and abilities. But the question is, would you even want to play?

Notice how I've yet to mention anything even resembling a real game yet? So far, I've basically described the world's greatest robot dress up game. This is because the gameplay is very…Japanese. You're meant to grind in GB3 and replay the same missions to get better loot. It almost feels like Monster Hunter in that fashion. Certain missions you clear act as “hot-spots” later down the line with slightly harder enemies. Even if they are “harder”, most enemies fight the same.

There are very few unique bosses in GB3, a stark contrast from the first game which had bosses that actually required strategy. All you do in GB3 is fight. You show up to a level, use a combination of light and heavy attacks from your melee weapon, fly away and shoot them with your ranged weapon, and use some sub-weapons and special attacks in between to spice up the monotony. It doesn't really matter as the entire game looks like a blur and you have no idea what your Gundam is so decked out for and is moving so quick.

What's even more annoying is the complete lack of difficulty or fear of losing all of your loot. You have four continues in each level, but it is rare that you will even use one of them. Even if you happen to get downed a single time, your teammates will quickly revive you. The lack of being able to lose makes every battle feel like a giant slog. There is no tension when low on health and certainly no reason to block.

The game also has an extreme issue with balance. For example, my Gundam has a special transformation called the “Super Dragoon”. In this mode, I can kill even the hardest enemy in about 15 seconds flat. The transformation lasts extremely long and has a ridiculously short refresh time. Every fight in GB3 now boils down to wailing on my opponents until the boss is summoned and then using Super Dragoon where I win in the blink of an eye.

It's safe to say unless you're a die-hard Gundam fan, you should stay far away from Gundam Breaker 3. While the mindless gameplay can be good in short bursts for me, it's definitely not for everyone. Even all the customization options aren't enough to make it worthy of an eighty dollar pick up. Do yourself a favor, buy eighty dollars worth of Gunpla instead.