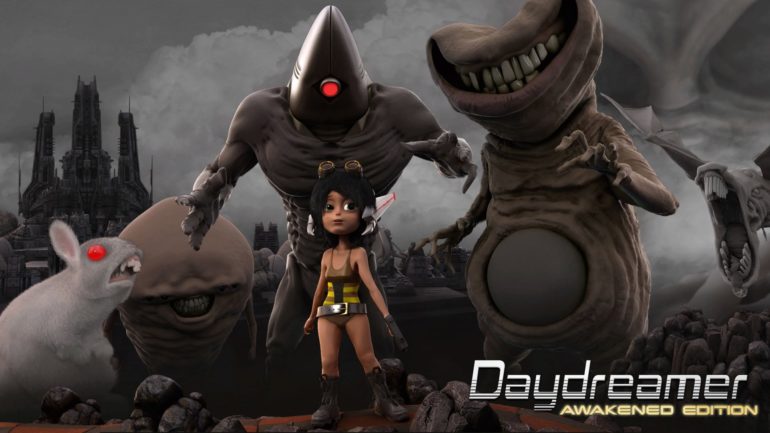 It is extremely rare that people get to make their dreams come true. Hear me out on this one, I am not referring to becoming a doctor, teacher or president. I mean making your actual, crazy, freaky dreams come true. That stuff that makes you sleep well or keeps you up at night. Roland Womack did exactly that. Last year, her released Daydreamer for PC, a game he made entirely on his own. Everything in the gameis based upon the craziness in his head. Now we have Daydreamer: Awakened Edition on PS4 and get to see if it was worth the wait.

NIGHTMARE FUEL If you have ever stopped and really analyzed stories like Alice in Wonderland or Wizard of Oz, you realize that the subject matter is really twisted. That is the kind of story we are dealing in Daydreamer: Awakened Edition. Put simply, Olivia needs to save her brother from evil alien overlords called the Consumers. The problem is that she is also amongst their captives. Fortunately, Olivia is special; she can project herself outside of her hyperbaric prison and kick some ass while doing so. Even though that sounds crazy, that is where “normal” ends for this game.

There is nothing special about the narrative of the game but I was immediately hooked. As a person many look at as weird, I could vibe with Womack's way of thinking. I was able to see the kind of passion that he had for his creation and somewhat understand the weirdness. it is a good thing that he made the game on his own because much of this would probably have been lost if he had help or left it to a development team. If you have an appreciation for the abstract, you will not go wrong here.

MEET MR SMILES If you think that this game looks crazy, wait until you get to control Olivia. The myriad of weapons you can get would make Contra jealous and that says nothing of her own abilities. The bane of many platformers is poor jumpin but Olivia has you covered. She can jump, double jump and even wall jump. If you are about to fall into a pit, she can teleport with the shoulder buttons. She can even generate a shield when things get dicey. She is a one girl army, but she is not alone. You can access spirit animals that provide supporting fire; Fuzzy Turtle is awesome!

All the weapons in the world mean nothing if you cannot utilize them properly. Fortunately, Daydreamer: Awakened Edition has tight controls and solid platforming. Missing a jump means that you messed up somehow and usually you can recover from it with Olivia's other abilities.

The graphics in the game are rather unique, to say the least. To describe them, I am going to tell a little story. One day, the creatures of Monsters Inc. ran into those from Aliens. The resulting battle somehow got sucked into The Matrix. Agent Smith just happened to be testing a Donkey Kong Country setting that day and here we are. That same day, Agent Smith happened to be having a “mushroom party.” This game ranks high on the trippy scale.

Fortunately, this is a good trip you will not mind having flashbacks of. Olivia and every resident of this nightmare world are beautifully rendered and the animation is so well done that it is literally creepy. The solid framerate means every moment of said animation moves fluidly across your screen. Depending upon your sensitivities, Daydreamer: Awakened Edition may give you some nightmares. Even then, it will look damn good doing so.

The truly ironic part about this game is that it is a sleeper hit. From its original PC launch to the PS4 Daydreamer: Awakened Edition, not many will have heard about it. This is sad because having had a chance to enjoy it I ask myself why people aren't playing this. In the US, the only reason we do not play arcade games anymore is that they have been phased out. I guarantee you that if places like the Chinatown arcade were still open that you could find games like this there. You would also find gamers ranging from teen to (now) fifty-year old business men playing them. We used to hope and pray that games like this would make it to our home consoles with faithful translations to the original coin-op. I praise people like Roland Womack for keeping the arcade spirit alive while pushing forward with new titles. Daydreamer: Awakened Edition is sitting in your Playstation Store for $10 right now. If you have ever blown a roll of quarters in an arcade then you owe it to yourself to do it one more time. Get this game now.