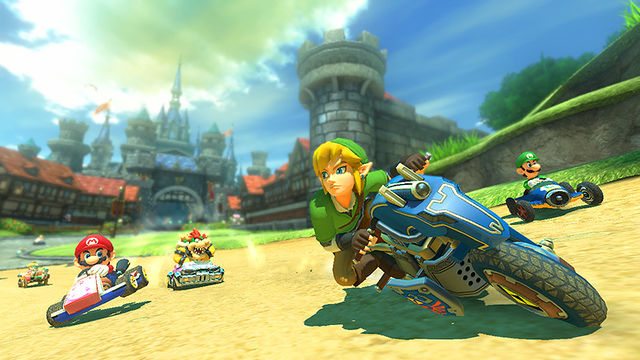 Mario Kart 8 is still receiving updates almost a year since it was launched. The game even received a new 200cc speed class, a first for the series. In case you weren't aware, I adored Mario Kart 8. Mario Kart's season pass was just as good, offering 16 other tracks as well as karts and characters. With all these new tracks, it's time to put the pedal to the metal and see which of these will make it the finish line in terms of the best track. We'll also see how each track fairs in 200cc mode. Remember, none of these courses are bad, they all range from good to excellent.

Did we need another Rainbow Road? No. But am I a sucker for SNES courses? Absolutely. This is a barebones remake of the SNES course, no gravity or flying, but it sure is pretty. Easily the most difficult of all the Rainbow Roads, be sure to be a master of drifting, especially on 200cc.

Remember when I said none of the tracks were back?  Yeah, I forgot about Yoshi Circuit. Besides the track being shaped like a Yoshi, it's pretty boring. Too many sharp turns, too much dirt, too little thrills. Yoshi Circuit would be Buried! if it wasn't for 200cc mode. The sharp turns are still there, but the speed opens up a few shortcuts that keep Yoshi Circuit from coming in dead last.

It's in a big dragon and you drift a lot…it looks cool but that's about it.

Honestly, I forgot this level existed until I played it over again. It's not bad, but it just feels slow, even on 200cc mode. A competent course, but not the best.

Alright now we're cooking. The next six courses were hard to pick a slot for, as they could really go anywhere. Such as Baby Park, which wouldn't feel right placing at number seven, even if I do really like it. Baby Park is seven laps of going around in a circle, and that's it…and on 200cc it's fantastic. I feel as if they put in Baby Park just so people could get a grip on 200cc. My biggest problem is that it's 7 laps and not 8. Considering all the “8” related objects in Mario Kart 8, they should have just made it 8 laps.

This level is like Stockholm Syndrome for me. I hated this course, but I played it so many times that I forced myself to like it. I have no reason for hating it and no reason for liking it, I just feel 11 is a neutral/bland enough number for Wario's Gold Mine to sit at.

This course was going to be placed at #15 until I realized how great the course actually is. My original complaints were that the course didn't receive the same treatment that the Zelda track did, but I was completely mistaken. The track has four different styles based on a season that is randomized and the coins are replaced with bells. While not the most exciting track ever, it's easy the most beautiful, which is what lands it in the Top 10.

These next 3 all happen to be in the Bell Cup within the game. The Bell Cup as a whole is the best cup in the game, so it was difficult figuring out where to put these three. Ultimately I went with how well the course can be managed on 200cc. Due to this, Neo Bowser City ranks lower than Super Bell Subway. While the level is great and looks stunning thanks in part to the rain effects, the lack of rail guards at all of the ledges makes it fall short.

However, Super Bell Subway suffers from a similar problem, but this time with too many hazards. The music in this one makes it edge out Neo Bowser City. Honestly, they are both equal.

I'm a sucker for toys so this level tickled my fancy. The level takes place in a child's room and your kart is the size of a Hot Wheel. It would be a disservice to good ideas to put this level any lower.

I don't even love Zelda but I can appreciate Hyrule Circuit. The first time John Blade and I played this, we were blown away. Rupees instead of coins, Zelda baddies instead of goombas, the Zelda theme jazzed up, and a shortcut so secret that it's a secret to everyone…we were hooked. Why isn't it higher up on the list? Because I've played it so many times that it has begun to become a chore to play it anymore, but all the Zelda fans beg to play it anytime it's game night. Oh well, to each their own.

I complained many moons ago that Mario Kart 8 is an abomination because it was stealing from F-Zero. I took that all back when I played Mute City. This course proved that F-Zero may be dead, but it's definitely not forgotten. It really does feel like playing F-Zero, they even replaced the coins with blue energy re-chargers. Also, any level that includes a Captain Falcon cameo deserves to be in the Top 5.

Cheese Land has one of the best layouts in the game…but is a dessert level. For that reason it is number 4 and not number 3. It has everything: most of the level is anti-gravity, there's paragliding segments, secret routes and even a chain chomp…but it's a desert level. Cheese Land resonated with me for some odd reason but is still held back due to being in the desert.

Like Cheese Land but not piss ugly from being in the dessert. Taking place in a community shared by Toads and Shyguys within the trees, Wild Woods' mix of visuals and audio work perfectly together. It also helps that the track is a blast. The only downside is that there is some beautiful scenery that you might crash and burn as you look around.

I love this track. While Animal Crossing and Zelda have great homages in Mario Kart 8, Excitebike‘s is perfect. All it was missing was no music. If it was just the sounds of engines and characters, it would have easily have been number 1. Excitebike Arena is easy for everyone to play thanks to its easy drifts and long stretch of straight driving, and with over 200 different course layouts, Excitebike Arena is almost the best of the new tracks.

This is one of the best of all the times. Not just one of the best of all time, but all the times, every time throughout space and the multiverse. From the moment I played it, I knew I found myself a winner. It was the last course I played once I started, and once I played through them all again I knew it was still the winner. Big Blue wins for one reason: excitement. Unlike Mute City, you actually feel like you're going as fast as they do in F-Zero. It also helps that the course is one straight shot from start to end. Instead of 3 laps around the tracks, its really just one big lap to the finish. Complete with F-Zero sound FX and even an announcer, Big Blue scores the big upset and is in my opinion the best of the new tracks.