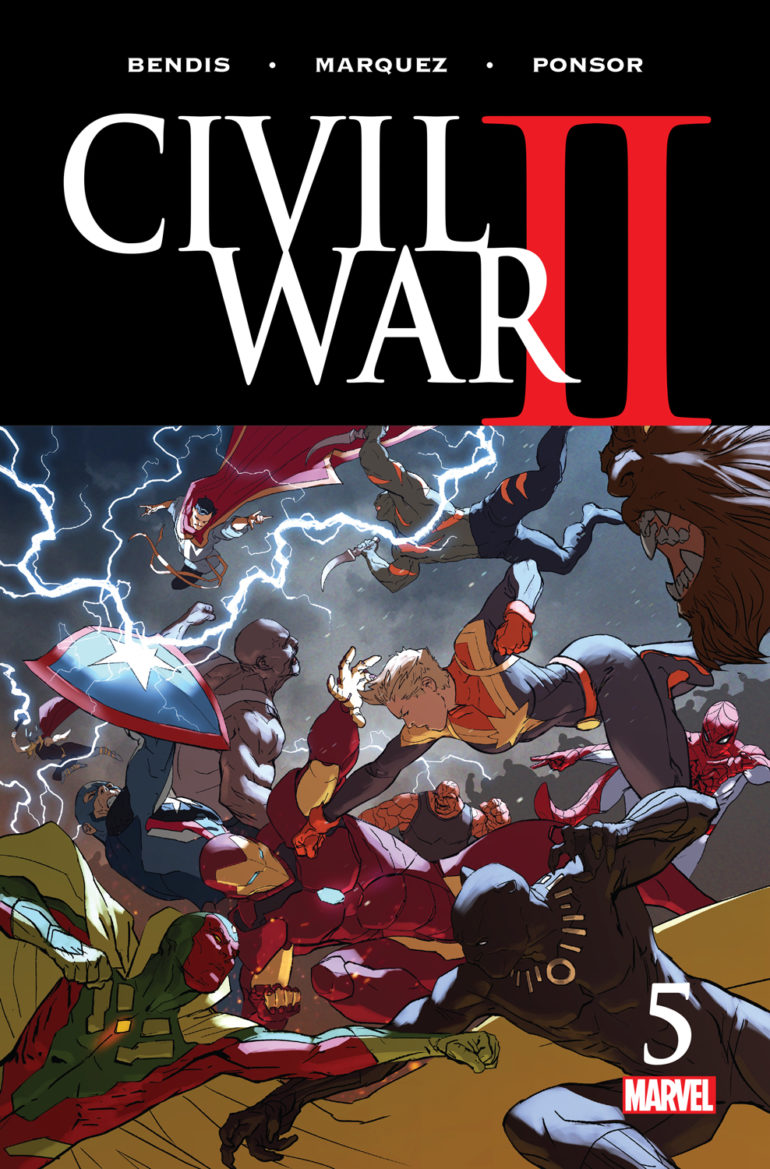 The Marvel universe stands divided as the conflict between Captain Marvel and Iron Man reaches a crescendo with both sides coming to blows on and off over the fate of the Ulysses. The conflict has already claimed the lives of War Machine and Bruce Banner and Marvel is teasing an ending that changes the status quo once more.  Be ready for the next chapter of what has already proven to be a wild ride. Get a sneak peek at the covers and artwork you can expect when Civil War II #5 hits store shelves on September 21st.

My Take: While Civil War II has lead to some shocking moments I am curious to see how much more Bendis has in the tank for the Marvel Universe. The death of War Machine was pretty crazy and I never thought Banner would get taken out much less by a teammate who has fought alongside him on more than one occasion. The fallout of Banner's death has fans waiting to see how the gamma-powered heroes respond with the “Totally Awesome” Hulk being front and center. I am not sure Civil War II will surpass the first Civil War series but they have had not shortage of memorable moments that for damn sure.

CIVIL WAR II #5 Pits Iron Man vs. Captain Marvel in All Out Grudge Match!
New York, NY—August 29th, 2016 — The battle lines have been drawn and war erupts! As the devastating fallout from the death of Bruce Banner sends shockwaves across every corner of the world, Iron Man and Captain Marvel duke it out with the future of the Marvel Universe on the line! Today, Marvel is pleased to present your first look inside the explosive CIVIL WAR II #5 – coming at you this September from the A-List creative team of Brian Michael Bendis, David Marquez, and Justin Ponsor. As punches are thrown and the war hits a fever pitch, the truth behind Ulysses’ predictive powers stands revealed – and it’s a game changer! Plus – an ending so shocking it’ll have the world talking! Don’t miss the thrilling next chapter when CIVIL WAR II #5 comes to comic shops and digital devices on September 21st!