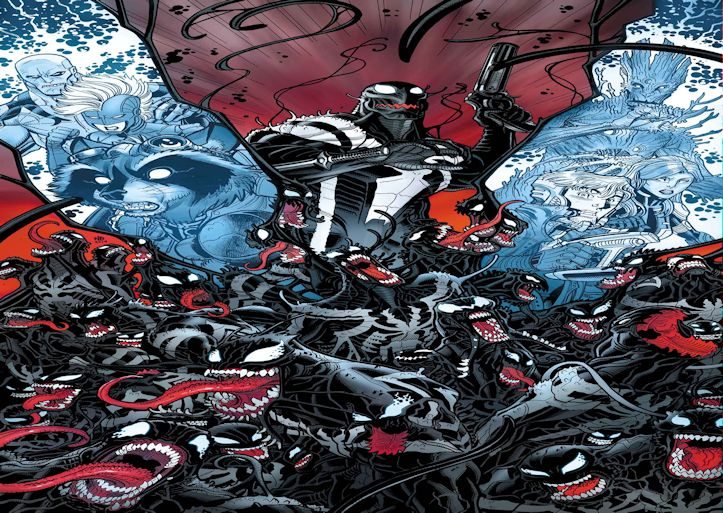 The Guardians of the Galaxy head to the planet of the symbiotes with Venom in tow. What could possibly go wrong? Flash Thompson will have his work cutout for him trying to keep Venom at bay when he among his own kind. A planet full of symbiotes and a rag-tag group of heroes is a recipe for madness and mayhem and with Star-Lord and company that's not always a bad thing. Guardians of the Galaxy#21 hits stores on November 19th.

“Planet of the Symbiotes” Begins in GUARDIANS OF THE GALAXY #21!

This November, the Guardians of the Galaxy face their worst nightmare as the new “Planet of the Symbiotes” arc kicks off in GUARDIANS OF THE GALAXY #21! Comic book superstar Brian Michael Bendis and Marvel Young Gun artist Valerio Schiti venture where no heroes have ever gone before – to the home planet of the deadly alien symbiotes! Ever since the Venom symbiote bonded with Flash Thompson, he has wielded it as a force for good, hoping to make the Earth a safer place. Only the far reaches of space are a little out of his depth! And with the Venom costume finally reunited with its own species – where will it’s allegiances lie? Trapped on a world full of hostile alien parasites, the Guardians of the Galaxy may begin to regret letting Flash Thompson join their team. Be there when the Guardians face a new horror in deep space as “Planet of the Symbiotes” kicks off in GUARDIANS OF THE GALAXY #21!