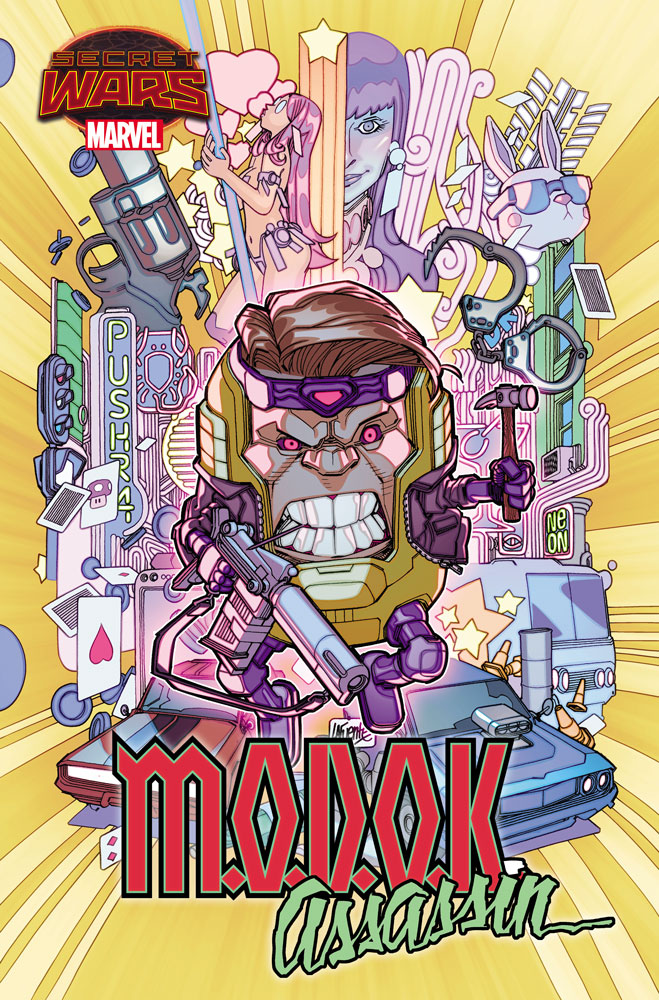 M.O.D.O.K. goes solo in this limited series that also ties into the Secret Wars arc. I know M.O.D.O.K. has a cult following for some odd reason so I am sure people will scoop up this series immediately. What do you guys think of M.O.D.O.K. getting a solo run?

M.O.D.O.K. ASSASSIN #1 Enters the WARZONE This May!

New York, NY—February 10th, 2015— This May, amidst the Earth-shattering events of Secret Wars, evil has a new face. A giant face with no body. Prepare to meet the deadliest hitman on all of Battleworld in M.O.D.O.K. ASSASSIN #1 – a brand new Secret Wars limited series coming this May from writer Christopher Yost (co-writer Marvel’s Thor: The Dark World,Amazing X-Men) and artist Amilcar Pinna (All-New Ultimates)!

Welcome to Killville, the only place on all of Battleworld where murder is always the correct answer. If you’ve got a problem, it’s nothing a little killing won’t solve. And in a world populated by the most fearsome thieves, mercenaries and ne’er do wells – there is one who is a HEAD above the rest. He is M.O.D.O.K.! The Mental Organism Designed Only forKILLING! And once he’s got you in his sights you’re good as dust!

“The fun here is showing how M.O.D.O.K. stands out against some of the worst that the Marvel Universe has to offer,” says writer Chris Yost in an interview with Marvel.com. “’It’s good to be bad’ is kind of the mission statement here. Can M.O.D.O.K. grow past his design? Would anyone want him to? Those are some big lofty theme-y questions, but let’s be clear…you’re going to see M.O.D.O.K. kill a bunch of people.”

Now, Killville’s most notorious mercenary is open for business, but this next job may put him in over his head! M.O.D.O.K. is going toe-to-toe with Doc Ock, Bullseye and even Baron Mordo – and that’s just the first issue, True Believer! Bullets will fly and heads will roll this May in M.O.D.O.K. ASSASSIN #1!