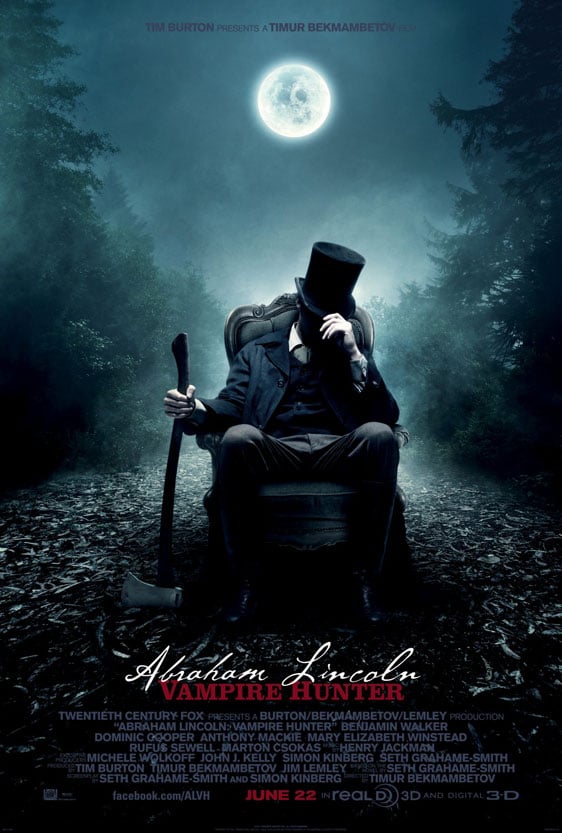 Abraham Lincoln is more than our 16th President of the United States. He was a lawyer, a family man , a revolutionary and…a vampire hunter? Seth Grahame-Smith’s literary masterpiece debuts on the silver screen to share President Lincoln’s war not only again slavery, but against the undead who had a large part to play in his life.

I became acquainted with Abraham Lincoln: Vampire Hunter at the recommendation of Josh who told me I should read it. After a few days of procrastinating, I sat down and read the book in two days. I was very impressed with the vision that Seth Grahame-Smith had created with of one of America’s leaders. Honest Abe was not just a moniker but an ideal in the film that came to life right out of the pages of the story. Timur Bekmambetov did a fantastic job bringing the book to life on the big screen. After his work with Wanted I knew that the visuals would certainly impress. Benjamin Walker did a phenomenal job as Abraham Lincoln; and I must commend the makeup and effects department who made him look exactly like the older President Lincoln we know so well. Another high point of the film was the various important moments in history that remained intact amidst all the fantasy elements at play. Pivotal battles from the Civil War as well as historic icons like Harriet Tubman remained unblemished, which I appreciated from a historical standpoint. Even the ending of the film was not altered as to change the progression of history. All those key elements remained intact to tell an excellent story which I enjoyed very much.

Abraham Lincoln: Vampire Hunter delivered across the board. You had great action, superb acting and awesome visual effects wrapped in a ribbon of history. If you are a history buff you should check this out strictly to see some great recreations of the Civil War and of course horror fans will enjoy it as well. Enter the theater with an open mind and leave entertained.