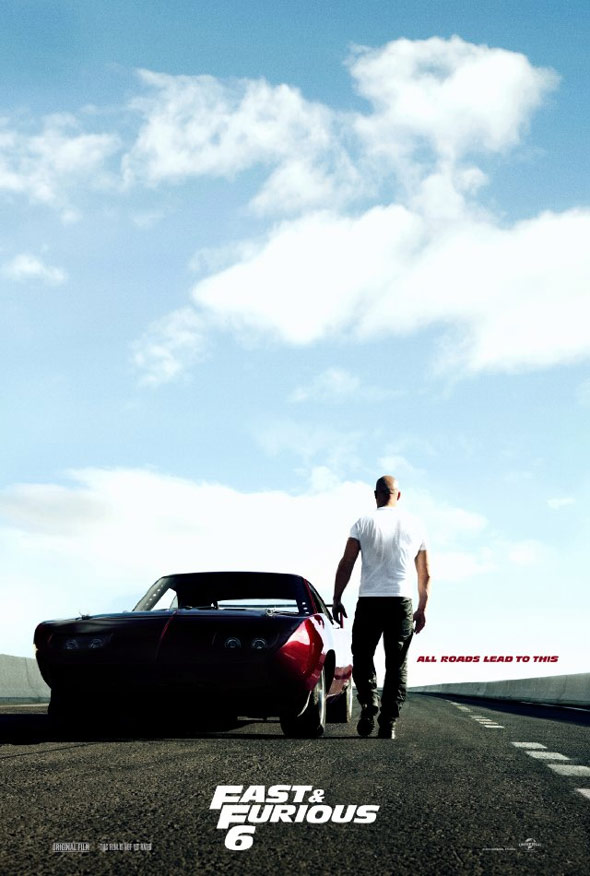 When we last left Dom and his crew at the end of Fast 5, they were enjoying the spoils of their multi-million dollar heist, but we all know that the closing credits revealed that Letty was still alive; which brings us to Fast & Furious 6. In the sixth installment, Hobbs recruits Dom and his team to stop a former SAS soldier and his team of drivers (which  happens to include Letty). The reward? Full pardons for Dom and his crew.

Honorable Mention goes to this clip, which brings viewers up to speed on the previous films:

The Fast & Furious franchise has done an amazing job not only in staying relevant but by reinventing itself from glorified car porn to heist movies to action films. Justin Lin has done a great job keeping the action plentiful while still allowing each character to shine throughout the films. I will say that the plot itself is serviceable at best, with certain elements making more sense than others – but let’s not kid ourselves in thinking we are going to get Oscar-winning writing from this franchise. The ever-evolving relationship between Dom and his “family” is an underlying tone throughout the film and the chemistry amongst the cast solidifies that. Even The Rock feels at home in this film and adds a bit more depth to Hobbs while newcomer Gina Carano was relegated to filler; which given her acting in Haywire is not necessarily a bad thing. Her fight scenes were great as always and the choreographers did an excellent job in showcasing her MMA background. I was happy to see Joe Taslim get some screen time along with a dedicated fight sequence which you can see in the section above. Joe was great in The Raid and I was glad to see he wasn't relegated to a subpar henchman role. While it’s easy to cite each cast member for their individual work, the fact is that they shined together and while Tego Calderon and Don Omar’s characters were written off they honestly weren't missed. Their departure allowed Tyrese more screen time and more opportunities for his infamous one liners and banter. The action on display in this film definitely eclipsed the action and stunts seen in the previous films (even though certain scenes bordered on the ridiculous). The over the top action is a calling card of the series and adds to it's summer blockbuster appeal. Fast 7 has big shoes to fill and James Wan needs to bring his A-game to make the series his own.

After taking the reigns in Fast & Furious: Tokyo Drift I feared this series was dead in the water, but Justin Lin succeeded not only in evolving the series but giving the franchise a new direction. Fast 6 brought Lin’s vision to a close in epic fashion and I was glad to have seen it on the big screen. As a fan of the series, if we had closed out with six being the final film I would have been fine with it – but if you stay after the credits you’ll see that the story is far from over. Will James Wan give us a fitting follow up? All eyes are on next year for Fast 7 but definitely go check out this film as it truly is a wild ride and a welcome start to the 2013 summer movie season.