My Take On: Immortals 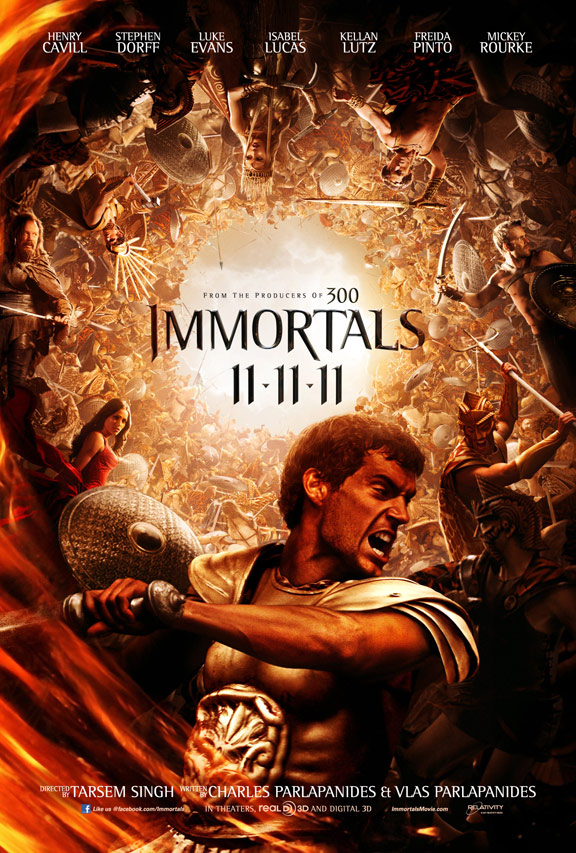 Theseus ( Henry Cavill) is chosen by the gods to lead free men against the evil King Hyperion. King Hyperion intends to free the Titans with the Epirus Bow and kill the gods of Mount Olympus.

Immortals is the newest in a long line of visually appealing sword and sandal films. Tarsem Singh created a world that rivaled the work of Zack Snyder in 300 and told a solid tale. Immortals  is chock full of blood and violence with a sprinkling of sex appeal in the form of Freida Pinto. The 3D effects were utilized well and did not detract from the quality of the film. Mickey Rourke did an excellent job as Hyperion and Henry Cavill proved to me that he has the screen presence to carry a film on his own. I consider Immortals Henry Cavill’s coming out party in the box office and a perfect vehicle to make him known to audiences before the release of Superman. My main concern was seeing Cavill try to imitate Gerard Butler in 300 and fail miserably. Cavill made Theseus his own and while the speech before the final battle was on par with Leonidas speaking to the Spartans it stood apart as something different and not a half assed imitation.

I do have one small gripe and that is the fact that the battle between the Gods and Titans seemed a bit too short for my liking. A part of me thinks that the battle was done shorter to compensate for the impressive visual effects.  Tarsem Singh continues to impress me with his excellent visuals and immersive storytelling. If you have seen the The Cell you’ll understand what I mean.

Immortals is the quintessential guy flick and if you are a fan of films like 300 and Gladiator then you’ll feel right at home. Immortals can be enjoyed in 3D and will be welcome addition to any Blu-ray collector upon release.