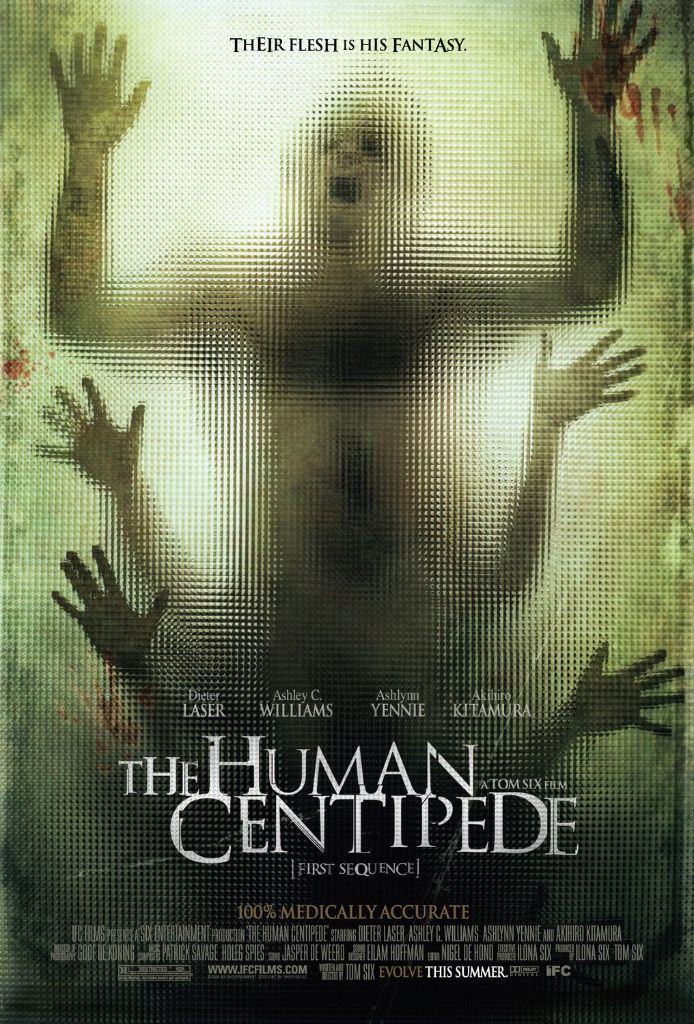 HC opens with a man sitting in his car staring at three dogs that have received the centipede treatment. The opening implied that our dear Dr. Heiter had been partaking in some self gratification on the side of the road. The good Doctor cleans himself up and proceeds to tranquilize a trucker that was taking a dump nearby.  Once I saw this scene unfold I knew I was in for a long drive through weirdville. The two main characters of course are young American girls ( Ashley Williams & Ashlynn Yennie) vacationing in Germany who run into some car trouble and ask the good Dr. for some assistance. Needless to say he wasn’t calling AAA and instead slipped both girls a roofie. When the girls wake up they are tied to hospital gurneys next to the trucker who was grabbed earlier in the film.  Dr. Heiter decides to kill the trucker since he is not a good match for his experiment. Dr. Heiter proceeds to grab a new victim who is Japanese( Akihiro Kitamura) and doesn’t speak a word of english. From there let’s just say that the experiment comes together in a very graphic fashion.  I won’t divulge further as to not totally ruin the plot.

The Human Centipede is a disturbing film from start to finish and is not recommended for the squeamish due to some of the graphic scenes depicted.  Tom Six did a fantastic job with casting Dieter Laser as Dr. Heiter who is as vile and disturbed as they come and has cemented himself a place amongst the horror elite. Many people chose not to watch this movie due to the graphic nature but I must admit that in looking past the shock value I actually enjoyed the film. Honestly most of the graphic footage is essential to seeing the centipede come to life. Most of the extreme content is implied and not really made a centerpiece for the film. The actor and actresses doing the centipede scenes deserve a ton of credit since they had to convey their emotions with expressions ( Middle & rear of centipede) and in another language ( head of centipede) to the viewing audience. Not to mention that they must have spent a tremendous amount of time on their knees. I was very shocked to hear that a sequel is planned which utilizes the subtitle full sequence which after researching further indicates that we may see a centipede created with 12 people.  Tom Six brought torture porn to a new level utilizing very few of the cliché’s seen in to other films. I recommend that if you are a horror fan you check this film out as I am sure you will enjoy it.  You can watch the madness yourselves on DVD,Blu-Ray or streaming via Netflix but do so at your own risk

I think they should have stayed in the car and