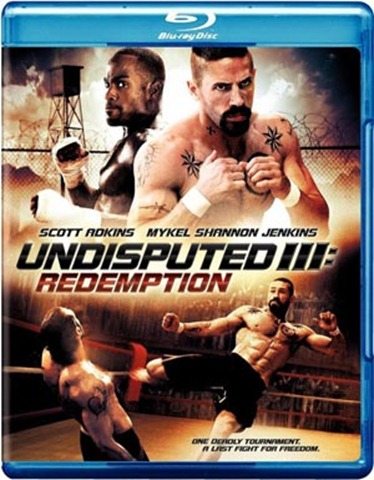 Undisputed 3 continues shortly after the end of Undisputed 2 focusing on Yuri Boyka ( Scott Adkins) who was defeated and hobbled by George “Iceman” Chambers ( Michael Jai White) in Undisputed 2. No longer the master of prison fighting, Boyka has been relegated to cleaning prison toilets. When word of an international prison tournament is announced with the prize being freedom Boyka decides that this is his chance to prove that he is the best prison fighter there is and hopefully gain his freedom.  With a bracket full of top tier prison fighters the odds are stacked against him and the hosting prison’s warden has plans of his own to protect his fighter “Dolor” ( Marko Zaror).

The Undisputed franchise has come a long way from Wesley Snipes and Ving Rhames who were the stars of the original Undisputed. Isaac Florentine took the reigns of this third film after his great work on the second Undisputed and I must say he has done a great job with the series. I was bummed when George Chambers character was omitted given the great evolution of his character. Scott Adkins did a great job in turning Boyka for a character you hated to one you could root for. The fight choreography in this movie is excellent with various martial arts disciplines being showcased . Marko Zaror is new in US action films since he primarily does Spanish action flicks. His portrayal of “Dolor” was borderline creepy yet successful in making you dislike his character. Keep an eye out for Lateef Crowder who played Eddie Gordo in the “wonderful film masterpiece” Tekken.

My Take: Undisputed 3 is a fun action film loaded with great fights and is recommended for fight fans and action movie buffs. You can get it on DVD and Blu-Ray now or you can watch it via streaming on Netflix. Keep an eye on Scott Adkins as I see him having a very promising career in the action film genre.

Recommendation: Rental for casual viewers and must buy for fight fans.