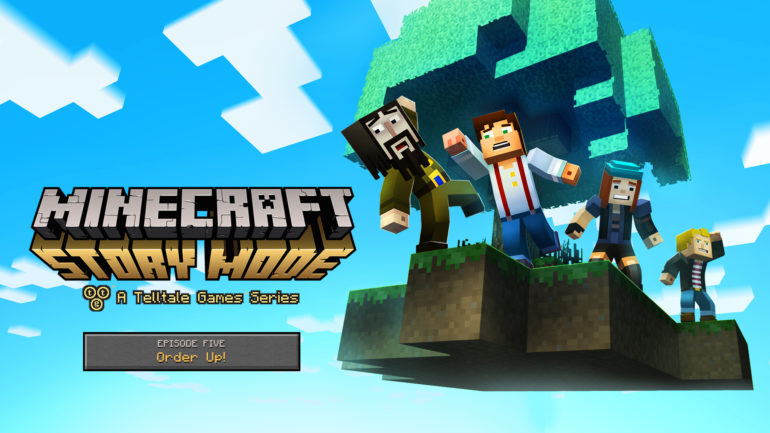 Minecraft: Story Mode has finally returned with what was originally intended to be its final episode. I think Telltale Games may have been a little lost with what to do for the final episode and that is why it took a while to release. Either that or the massive popularity of the title took them by surprise and they completely scrapped what the original episode 5 was to be. I kinda feel like that is what happened as the game has taken a new direction with the defeat of the Wither Storm. Ruben is gone (sadness) but life goes on. The Order of the Stone is reborn and its new members will have new adventures, starting today! Episode 5 of Minecraft; Story Mode, titled “Order Up,” takes the order to a location they never knew existed: Sky City. An old annoyance becomes a major foe as the Order encounters a new civilization. How will Jesse and his friends get out of danger this time? Well, they defeated a demon monster the size of a city already, how hard could it be?

Episode 5 of Minecraft: Story Mode, “Order Up!” is in stores now. Please note that the original season pass only gives you episodes 1-5. If you want episodes 6-8, there is now an “Adventure pass” you can purchase. If you have not yet purchased Minecraft: Story Mode but would like to, go for the Season Pass Deluxe. It covers all eight episodes and is $40.

Oh, just one more thing, tonight we will be streaming Episode 5 via the SlickStream! Look forward to it!