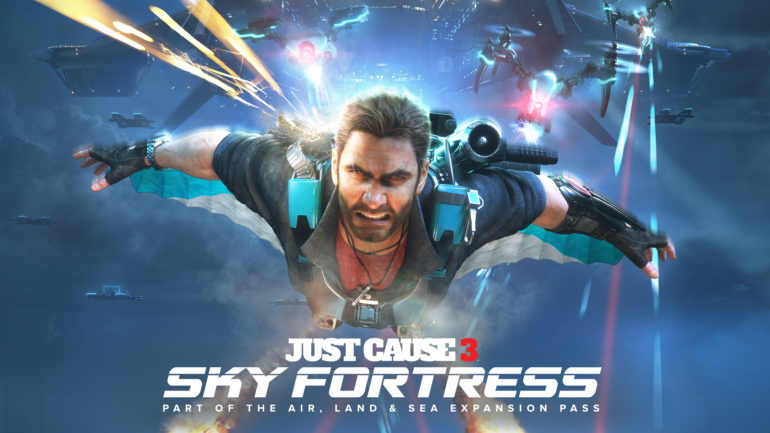 When I reviewed Just Cause 3 back in December, I remarked upon the amount of freedom the game gives you. The Medici archipelago is an enormous playground that allows for so much random violence. The game was literally a thing of beauty in a twisted sense. More than any game I had ever played previously, Just Cause 3 allowed gamers to make destruction into an art form. Square Enix delivered on the promise of letting us “Set the World On Fire,” but there was still the promise of more. The Air, Land & Sea Expansion Pass has been available since December 1, 2015 when the game launched, but we had no idea what it would truly entail at the time. So Just Cause 3 had to rely on its main campaign to wow us. That mission was a definite success. Just when you thought things could not get any better, something incredible popped up on our screens.

FORBIDDEN FRUIT Rico Rodriguez thought that his beloved homeland was both free and safe. The tyranny of Di Ravello had been brought to an end with his own hands. Even though it cost him the life of a dear friend, Rico believed the sun would finally shine brightly upon Medici once more. Unfortunately, there is the potential for clouds on even the brightest of days. Rico saw a shadow spreading over Medici, but this time it was in the form of a gigantic, Sky Fortress. The Eden Corporation has come to Medici and plans to take its Bavarium; all of it. Aside from not having permission to do so, there is one big problem: the foundation of Medici's islands is almost completely made of Bavarium. Taking it all means wiping Medici off the map and the Eden Corporation has no issue with this. It's time for Rico to come out of his very short retirement and save his home once again. Di Ravello may have been evil, but he at least loved the land he trampled underfoot!

OFF WE GO If you enjoyed playing Just Cause 3 then the controls will feel completely natural to you. The new and improved wingsuit is slightly different from the original, but you will be able to control it with ease. I dare say that it is a lot better than the original. That statement is unfair because the Bavarium wingsuit goes so far as to literally make Rico into a VTOL fighting machine. The shoulder mounted machine gun is infinite; it's too bad that you have to be airborne to use it. The same goes for the homing rockets. Each of these have a cooldown period, but your airborne arsenal is still amazing. Needing to be airborne to use these new weapons is not a huge deal. With the improved wingsuit, you never have to touch down unless you choose to and you can even take off from the water (hint, hint). I flew for over twenty minutes straight, while making 180° turns and attacking several bases. If you take a hit, you will start to fall, but you regain your composure in a few seconds and can deploy your wings to continue flight. When Avalanche Studios said this is the “air” portion of the expansion pass, they meant it. The downside is that there is not much in the way of content. You will spend maybe three to five hours on this and that is only if you complete the wingsuit challenges. I love the new wingsuit and I love the Bavarium Splitter machine gun. I also love tearing the Eden Corporation to shreds. The final mission is insanity; it is much better than the main game's final fight. The problem is that if you have already finished Just Cause 3, this content feels like it is over before it gets started.

AIRBORNE ARTISTRY Even if you have only seen trailers of Just Cause 3 and never actually played it, you know that this game looks fantastic. The attention to detail is highly commendable, despite some slight glitching. The water and lighting are among the best you will see on today's consoles and the draw distance makes that of Grand Theft Auto V want to cry. When I finished the main game, I was carrying the M488 FOW, so that is what I had on me when I started the Sky Fortress. If you do not know what that is, the game uses these choice words to describe it:

Basically, fire it at something that you don't like and that thing will be gone forever.

Walking around with an RPG that fires nukes makes for some insane action in the air. The Sky Fortress has a lot of targets for you to take out and once you get the hang of flying, you will enjoy every moment of that. Unfortunately, someone decided that they were not going to animate the cutscenes of this story. Just Cause 3 was never going to win any “best story” awards, but it was fun to experience because there was a lot of silliness. How can you not love madness like this:

I was greatly disappointed that there were no animated cutscenes, especially at the end of the game where certain events, even if they did transpire we will never witness. Instead, the decision was made to use hand-drawn still images. Consider the cost of this DLC by itself. For three dollars more (and sometimes two dollars less), you can download full games from the PSN (XBL, Steam, etc.). There is really no excuse for things like this, especially from Square Enix. It really makes the presentation of Sky Fortress feel lazy.

In all, I did enjoy the Sky Fortress DLC. The new weapons are fantastic and the new opponents are plentiful. The drones are made to annoy you and do their jobs well. Even though no jokes were thrown in, the ability to “do a barrel roll” was great, especially when you use it to dodge missiles. The Sky Fortress story is weak unfortunately. There is nothing wrong with the plot itself; it is the execution that I find issue with. The lack of animated cutscenes feels like Just Cause 3 was a wild love affair and the magic is gone now that Sky Fortress is here. I can only hope against hope that they come back when the land DLC comes out. The other big issue is length. This content is way too short for $12. I suspect that when all three content packs are out that everything will be worth it, especially if they connect the stories somehow. That said, I cannot recommend purchasing Sky Fortress separately. For one, it is financially a bad move. If each pack is $11.99, you essentially get the last one for free if you purchase the expansion pass for $24.99. $25 is better than $36, even if the individual content were not short. If you enjoyed Just Cause 3, you should get the full expansion pass because I believe the missions will get crazier. Rico got a wing suit in this content pack; in the next installment, he gets this:

You do the math.