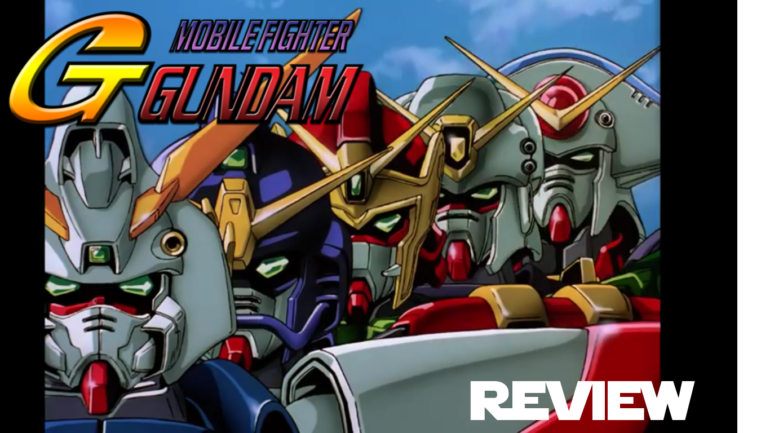 Watch all of G Gundam on Youtube for FREE HERE

I've never done a review on a television show, but this is a rare exception. During my trip to Japan, I became a huge fan of the Mobile Suit Gundam series. Gundam is essentially the Star Wars of Japan, with a huge expanded universe composed of a ton of cartoons, novels, and movies. With that said, it was hard to find a starting point in this franchise, so I settled for the self-contained Mobile Fighter G Gundam. It was a perfect time to start watching, as a remastered version of the series is launching in Japan later this year. Is G Gundam worthy of your time, or a failed experiment from the 1990's?

I'm not going to wait to give my opinion because G Gundam is downright terrible. I've never seen a television show go down in flames quicker. For the uneducated, the Gundam series (before G Gundam) was a space opera that took place in a timeline called the “Universal Century“. Gundam was all about the conflicts of war and the toll that it took on its people. Furthermore, no one was safe. Important characters could die at the drop of a hat in the middle of a story arc and there were shades of gray in both the protagonists and antagonists.

Let's get the good (the very little good) out of the way. The show starts strong, in an almost self-parodying way. After years of depressing Universal Century shows, G Gundam is a welcomed change. Every episode starts with a narrator who talks directly to the audience and tells us what's going to happen on this week's episode. He gives all the exposition you need, and sometimes even spoils the episode. The narrator quickly reveals that there is no war and that all conflict is determined in a giant Gundam tournament that is held every four years on Earth. All nations of space send one Gundam to Earth, and the winning country's Gundam gets to rule the universe for the next four years. Meanwhile, our main character, Domon Kasshu, represents Neo Japan (yes, every country in this show has the name “neo” preceding it).

Domon travels the world looking for his evil brother who is piloting the Devil Gundam. Domon believes his brother killed his family and is willing to kick everyone's ass to find him. What's interesting about Domon is that he's kind of an asshole. The best way to describe G Gundam and Domon would be if you replaced Goku as the main character for Dragon Ball Z with Vegeta. He's not evil, he's just kind of a dick.

Eventually, Domon makes some friends in the other nation's Gundam Fighters and gains the strength to defeat his brother and kill his former master. The first half of the series ends as Domon races to the finals of the Gundam tournament. Sadly, this covers only half of the series, and the rest of the show takes a nose dive…FAST. Everything that occurs before the actual tournament is pretty good. All of the supporting cast is introduced at a steady pace and villains are introduced at a pace that makes them feel fresh, but doesn't make them feel like villains of the week.

So, remember when I said characters could die all the time in Gundam and the original “Universal Century” shows? The opposite is true here, as the plot protects all of the main characters. Right before the tournament finals, Domon destroys the Devil Gundam and blows up his master. However, only one episode later and Master Asia is fine. They never explain how Master Asia survived the explosion or how he made it to the Gundam Finals BEFORE Domon, despite Domon JUST launching his Gundam into space and his rockets igniting the decaying corpse of Master Asia's Mobile Suit!

This is the biggest problem with the second half of the series; every single villain from the first half is a villain in the second half. No defeat or victory counts once they get to the tournament finals. The Devil Gundam is always the villain from start to finish, even though it's destroyed multiple times. While the Devil Gundam can self-regenerate, the show makes it seem like it is defeated so many times, that when it is finally killed during that last 5 minutes of the final episode, you don't care.

Even minor villains that were killed off come back with no explanation and are even allowed to enter the tournament, despite the rules saying they should be eliminated. This is a case of the show ignoring its own in-universe rules. If a show doesn't follow its' own rules that it sets out from the start, then why should the audience be invested? If characters can seemingly die, but come back to life an episode later, why should we care that they “died” in the first place?

This happens during the last several episodes of the show, as all of Domon's friends “sacrifice their lives” to make sure Domon can continue his mission. It's heartfelt, and Domon says goodbye just for them to be alive an episode later. No one even comments by saying “OH MY GOD, YOU'RE ALIVE“! No, it's like they've been there the entire time. Hell, Domon isn't even surprised to see that they're still alive.

But, the absolutely biggest “fuck you” comes from Domon Kasshu himself. For the entire first half of the show, Domon pilots the Shining Gundam. After an entire arc of training, he learns to pilot it to it's fullest power. This all goes away once the Shining Gundam is destroyed and he must pilot the God Gundam instead. While the God Gundam is stronger than the Shining Gundam, Domon has to relearn how to pilot it. Essentially, because Domon already defeated every single fucking villain in the first half of the show, they had to make him weaker in the second half so the bad guys can stand a chance again.

The God Gundam and Domon's inability to pilot it like he could the Shining Gundam makes the entire first half of the show useless. All the growing and learning that Domon achieved basically vanishes as Master Asia acts like Domon didn't beat his ass and blow him up. I'm sorry, but you could make a drinking game of out the times Master Asia says, “you will never have the strength to defeat me with the God Gundam, Domon“, after Domon beat him with the weaker Shining Gundam. It just baffles my mind, as I've never seen a series retcon it's main character in a singular season.

While Dragon Ball Z did it in Dragon Ball GT, that was an entirely separate series and was never really canon to begin with. This de-powering happened withing a single 49-episode series! By the time Domon figures out how to pilot the God Gundam to it's fullest power, and defeat the Devil Gundam and Master Asia again, you don't care, as he already did it 24 episodes earlier in a much cooler fashion. There is nothing redeeming to the ending of G Gundam besides this one scene.

After all the negative I've said, you should still watch the first half. I didn't even touch on the offensive stereotypes like Spike Gundam of Mexico wearing a sombrero and poncho. Or how odd it is that an actual horse pilots a horse Gundam. The first half of the show is enjoyable in an “it's an early 90's anime” kind of way.

The first half has better arcs, better character development and more fights that actually mean something. My recommendation, pick up the first half, (or watch it free on Youtube) and enjoy some quality 1990's anime. But once Domon gets to the tournament just pretend the rest is a weird fever dream by Master Asia. But make sure you jam out to the opening one last time before doing so!