After  watching the amazing Indie Game: The Movie, I decided to check out some indie games for myself. No, not the ones featured in the film like Fez, Super Meat Boy and Braid, because I already love the three of them. No, I went back into the cesspool that is the Xbox Indie game Market Place which is the equivalent of the iTunes app store for Xbox. You want to find cult classics, but it’s more like flash games for a buck. It took me since January to clean myself off, so let’s dive back into some more Xbox Indie Shit!

What may be the greatest title for a game since Octodad: Dadliest Catch  (no that is not a typo) comes this wave defense shooter. You play as (UnnamedRomanSoldier-1) who lives in ancient Rome during the time of Nero. Hell, you might even be Nero, but seriously who cares the game stops being good at it’s title. The graphics, while decent for a buck, look like a PS2 game. Graphics aside, I haven’t seen this bad of AI since Duke Nukem Forever. Seriously, I shot one of the aliens and he literally rolled into my shot then back into a pillar, which he started to shoot at. Speaking of shooting, did Nero figure out how to use a gun? You see, you start out with an overpowered sword and then unlock guns after the first wave. Wouldn’t Nero be a little confused as to how to reload and how to turn off the safety? Wouldn't Nero break his fucking arm considering he’s not used to the recoil? I may be over-analyzing, but come on! Aliens vs. Romans isn't groundbreaking, but it really just makes me want to break the ground with my controller. Aliens vs. Romans is a game you should try for yourself before you spend dough on it.

Imagine combining a twitch, bullet hell and wave shooter together, but now add in cats and submarines. Ladies and gentlemen, I present Aqua Kitty: Milk Mine Defender. The basis of the story is that cats have run out of milk, so they have set up deep sea drillers to extract more from the Earth. However, bad robots attack and you need to defend the crew as they get the goods. It’s like Pacific Rim with cats and not like Pacific Rim! A funny premise in itself, but add its beautiful pixel art, a killer 8-bit soundtrack and an obvious love letter to shooters of old such as R-Type, Aqua Kitty is a must buy game.  And yes, I actually bought it. As a matter of fact, it’s the only Indie game I’ve ever bought, but for $3.00, I couldn’t pass it up! You can even play co-op with you cat obsessed girlfriend, it truly is that awesome.

Yeah, a game with the word Avatar in it. As we know from Avatar Death Match, these type of game aren’t always gold. But the company that made Avatar Warfare is sure shitting out gold. The same company that made Avatar Warfare also made Castle Miner and Castle Miner Z, two shitty games that I featured in my last indie article. Avatar and Minecraft games, fuck you for life. But people love 'em apparently. Avatar Warfare has like 4,000 likes on Facebook – people actually play this shit! Yet the Aqua Kitty team only has 100 – get out of here! But seriously the game itself, for a dollar…it’s not horrible per say, but I don’t see why ANYONE would want to buy it. Think about this, for a dollar I could buy a taco. An entire taco can be mine, for less than the price of Avatar Warfare. Hell, that’s a late night snack, and something I will appreciate way more than Avatar Warfare for a dollar. Seriously, if you are THAT desperate for a shooter with online…excuse me, online only, why not just buy Duke Nukem Forever and play that shit online? Sure it’s shitty, but so is Avatar Warfare but at least that game is funny! Avatar Warfare is so bland it made me change my rating of Aliens vs. Romans from “pass” to “try for yourself.” But hey, at least it’s more balanced than Call of Duty… Skip this game people.

Another retro-inspired game that is one that has been on my radar for a long time now. I downloaded it months ago but never played it, but now I have and boy was a I missing out. This game brought me back to the days of playing games on the original Gameboy. More specifically, the game reminded me of Bart Simpon’s Escape from Camp Deadly. A horrible fucking game but that’s the thing. A lot of games on the original Gameboy weren’t exactly very good and many were simple ports of NES games. Take Megaman for example. RadRaygun excels because it is made to look like a bad game, but plays like a good one. If you’re confused by my wording, let me explain.Rad Raygun purposely makes itself look like a bad game, while still playing well. Rad Raygun’s movement looks jittery, but he plays smooth. Their enemies are completely disproportionately sized, even though they are all supposed to be humans and the game is completely in gray scale. Rad Raygun is a nostalgia trip that will definitely take you back. However, the game is short, you can beat it in an hour and you may not appreciate it if you weren't an 80’s or 90’s baby. But for a dollar, I think it’s a must buy.

I know you all wanted to play PacMan but set in the the 1980’s complete with a Miami Vice color scheme. No? Well no shit. If that idea seemed cool to you then you shouldn’t even be reading this article. You are probably someone who bought Avatar Warfare or the fucking final game on this list. But why would you buy a shitty PacMan when you could just go online and play a not so shitty flash version of the same game. Hell, Google even has a version you can find and play. At least the title is accurate. Reality does byte, especially when we live in a world where this game exists.

Now this was pretty cool. A Metroidvania Portal? Now that’s something I can get behind. Gateways is a 2D platform puzzler where you must find out why robots in your lab have run amuck. However, to solve the mystery, you must find and upgrade your portal, excuse me, “gateway” gun. While the art isn’t exactly top tier, it’s a fun little game, but one that I won’t go back to. Try it out and you may have a different opinion. 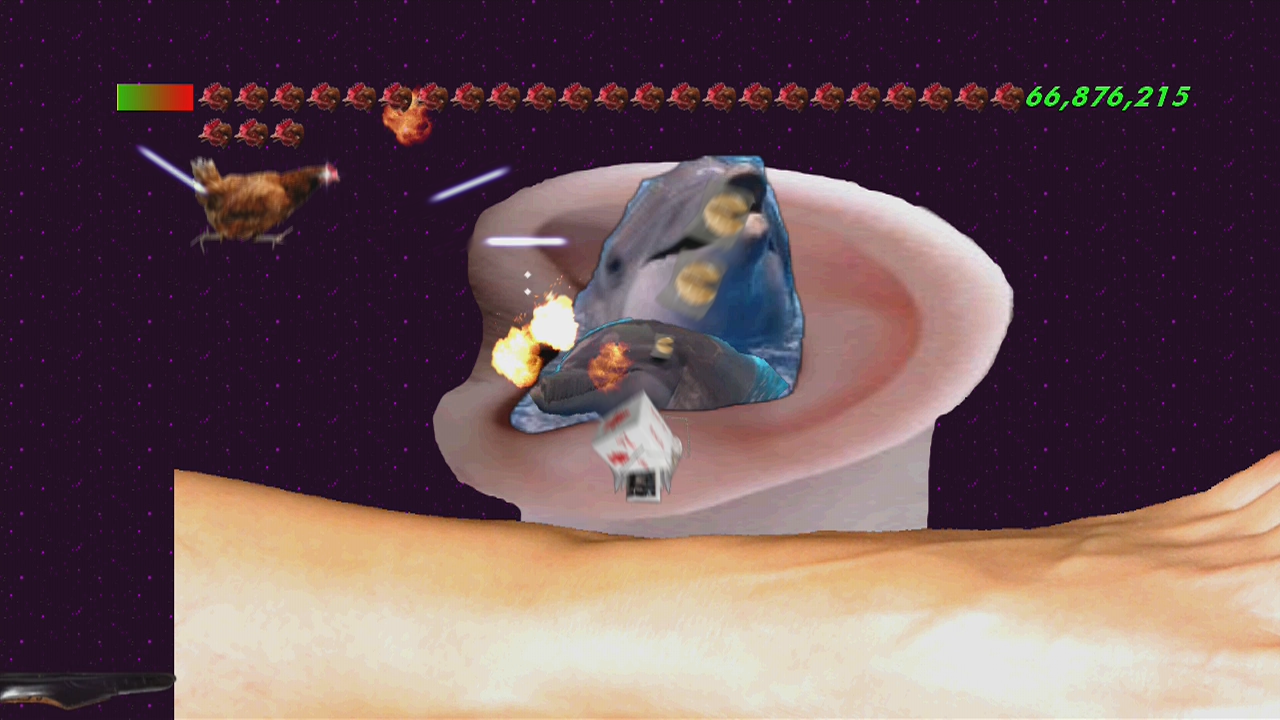 There is inspiration and then there is batshit insanity with no rhyme or reason. This game makes me wish I was fucking Amish! I’d do anything to erase this piece of shit from my mind! The Chickening is a ridiculous in-joke of a couple of programmers who got a hold of Microsoft Paint and decided to make a game. The Chickening is the reason Xbox Indie’s should have quality control. Fuck this game!