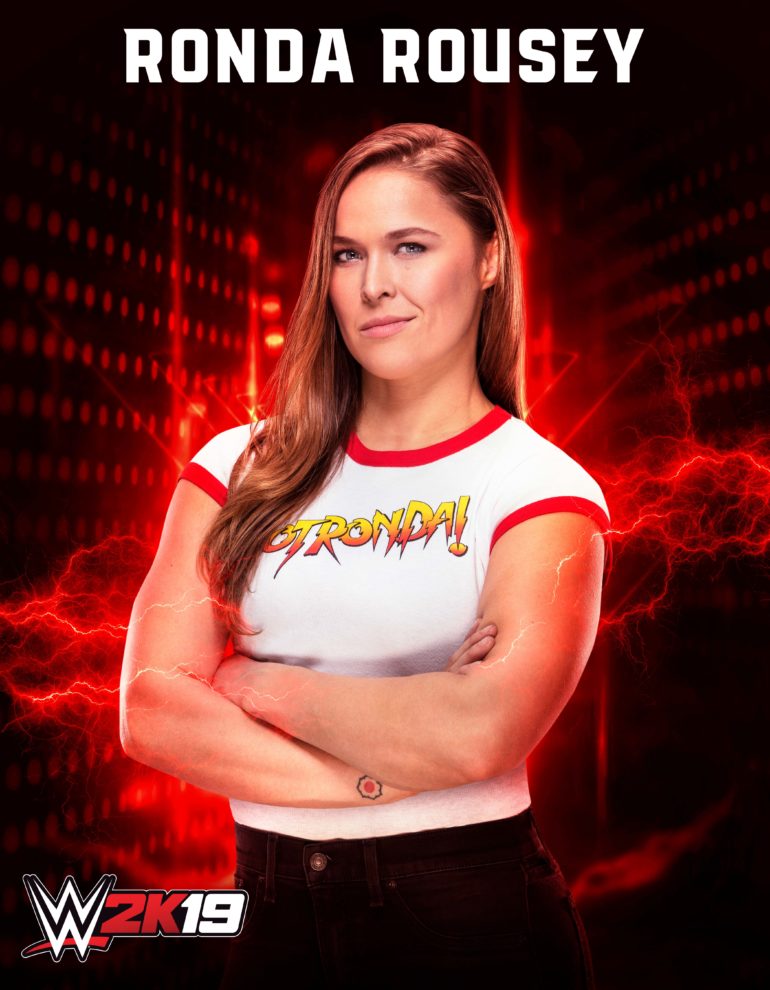 UFC Hall of Famer Ronda Rousey can be seen in EA Sports UFC 3 but now that she is a full-fledged WWE superstar we knew it was inevitable that she would be joining a WWE game. We didn't have to wait too long for that to happen as 2K announced that “The Baddest Woman on the Planet” will make her WWE game début as a pre-order bonus for WWE 2K19 this fall joining the recently announced lucha libre legend Rey Mysterio.

“As a WWE Superstar, having support from the Piper family means everything to me,” said Ronda Rousey. “It’s an honor to be part of WWE 2K19 and have my name mentioned alongside so many important Superstars in WWE history, including Rey Mysterio, Kurt Angle®, Ultimate Warrior®, Sting™ and Goldberg™.”

“Anybody can call themselves ‘Rowdy’, but it takes a special, talented and dedicated individual to live up to the ‘Rowdy’ name,” said Colt Toombs, son of “Rowdy” Roddy Piper. “My dad saw it in Ronda, and so do we. She is truly ‘Rowdy to the core,’ and that mindset really comes through in the trailer for WWE 2K19.”

Rousey, alongside former WWE Champion Rey Mysterio, will be available as bonus content for those who pre-order the game at participating retailers for the PlayStation®4 computer entertainment system, the Xbox One family of devices including the Xbox One X and Windows PC. WWE 2K19 is currently scheduled for worldwide release on October 9, 2018, with Early Access players receiving their copies and in-game bonuses beginning four days early on October 5, 2018.

“From an Olympic tatami to the UFC Octagon to the WWE ring, Ronda is a one-of-a-kind athlete and incredible ambassador for career and life empowerment,” said Chris Snyder, Vice President of Marketing at 2K. “Her discipline, determination and attitude toward accomplishing her goals and silencing her critics make her the perfect embodiment of WWE 2K19’s ‘Never Say Never’ global marketing campaign. We are thrilled to welcome Ronda to the WWE 2K family and can’t wait to see what’s in store for her in the years to come.”

About the WWE 2K19 Deluxe Edition

Players who purchase the WWE 2K19 Deluxe Edition, available in both physical and digital varieties at participating retailers, will receive Early Access to their game copies and in-game bonuses beginning four days early on Friday, October 5, 2018 for the PS4™ system, Xbox One and Windows PC. The WWE 2K19 Deluxe Edition includes the following items:

About the WWE 2K19 Collector’s Edition

Developed collaboratively by Yuke’s and Visual Concepts, a 2K studio, WWE 2K19 is not yet rated by the ESRB. WWE 2K19 is currently scheduled for worldwide release on October 9, 2018, for the PS4™ system, Xbox One, and Windows PC. For more information on WWE 2K19 and 2K, visit wwe.2k.com, become a fan on Facebook, follow the game on Twitter and Instagram using the hashtags #WWE2K19 and #NeverSayNever or subscribe on YouTube. For more information on the WWE 2K19 Million Dollar Challenge, please visit wwe.2k.com/milliondollarchallenge/rules.

WWE, a publicly traded company (NYSE: WWE), is an integrated media organization and recognized leader in global entertainment. The company consists of a portfolio of businesses that create and deliver original content 52 weeks a year to a global audience. WWE is committed to family friendly entertainment on its television programming, pay-per-view, digital media and publishing platforms. WWE’s TV-PG, family-friendly can be seen in more than 800 million homes worldwide in 25 languages. WWE Network, the first-ever 24/7 over-the-top premium network that includes all live pay-per-views, scheduled programming and a massive video-on-demand library, is currently available in more than 180 countries. The company is headquartered in Stamford, Conn., with offices in New York,Los Angeles, London, Mexico City, Mumbai, Shanghai, Singapore, Dubai, Munich and Tokyo.

Additional information on WWE (NYSE: WWE) can be found at wwe.com and corporate.wwe.com. For information on our global activities, go to http://www.wwe.com/worldwide/.

Forward-Looking Statements: This press release contains forward-looking statements pursuant to the safe harbor provisions of the Securities Litigation Reform Act of 1995, which are subject to various risks and uncertainties. These risks and uncertainties include, without limitation, risks relating to: WWE Network; major distribution agreements; our need to continue to develop creative and entertaining programs and events; a decline in the popularity of our brand of sports entertainment; the continued importance of key performers and the services of Vincent K. McMahon; possible adverse changes in the regulatory atmosphere and related private sector initiatives; the highly competitive, rapidly changing and increasingly fragmented nature of the markets in which we operate and greater financial resources or marketplace presence of many of our competitors; uncertainties associated with international markets; our difficulty or inability to promote and conduct our live events and/or other businesses if we do not comply with applicable regulations; our dependence on our intellectual property rights, our need to protect those rights, and the risks of our infringement of others’ intellectual property rights; the complexity of our rights agreements across distribution mechanisms and geographical areas; potential substantial liability in the event of accidents or injuries occurring during our physically demanding events including, without limitation, claims relating to CTE; large public events as well as travel to and from such events; our feature film business; our expansion into new or complementary businesses and/or strategic investments; our computer systems and online operations; a possible decline in general economic conditions and disruption in financial markets; our accounts receivable; our revolving credit facility; litigation; our potential failure to meet market expectations for our financial performance, which  could adversely affect our stock; Vincent K. McMahon exercising control over our affairs, and his interests may conflict with the holders of our Class A common stock; a substantial number of shares which are eligible for sale by the McMahons and the sale, or the perception of possible sales, of those shares could lower our stock price; and the relatively small public “float” of our Class A common stock. In addition, our dividend is dependent on a number of factors, including, among other things, our liquidity and cash flow, strategic plan (including alternative uses of capital), our financial results and condition, contractual and legal restrictions on the payment of dividends (including under our revolving credit facility), general economic and competitive conditions and such other factors as our Board of Directors may consider relevant. Forward-looking statements made by the Company speak only as of the date made, are subject to change without any obligation on the part of the Company to update or revise them, and undue reliance should not be placed on these statements.

Headquartered in New York City, Take-Two Interactive Software, Inc. is a leading developer, publisher and marketer of interactive entertainment for consumers around the globe. The Company develops and publishes products principally through its wholly-owned labels Rockstar Games and 2K, as well as its new Private Division label and Social Point, a leading developer of mobile games. Our products are designed for console systems and personal computers, including smartphones and tablets, and are delivered through physical retail, digital download, online platforms and cloud streaming services. The Company’s common stock is publicly traded on NASDAQ under the symbol TTWO. For more corporate and product information please visit our website at http://www.take2games.com.