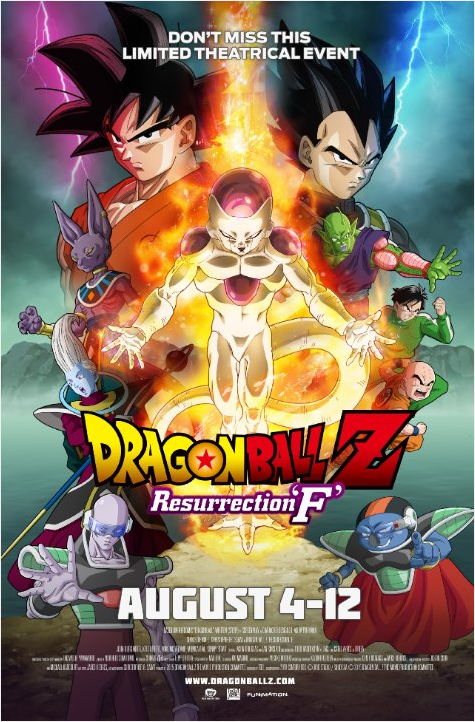 One peaceful day on Earth, two remnants of Frieza‘s army named Sorbet and Tagoma arrive searching for the Dragon Balls with the aim of reviving Frieza. They succeed, and Frieza subsequently seeks revenge on the Saiyans.

Dragon Ball Resurrection ‘F' came out of the gate with tremendous action sprinkled with some great comedic moments that came not only from the main cast of ‘Z' fighters but also from the villains. While Battle of the Gods was extremely enjoyable, I always felt that it went slightly overboard with the comedy whereas Resurrection ‘F' went with a more action-based plot which I thoroughly enjoyed. Resurrection ‘F' took me back to those late nights watching subtitled DBZ sagas on VHS. The animation and voice work were stellar and the mix of hand drawn animation coupled with CG made for some amazing visuals.

While I was initially apprehensive about reusing a villain of Frieza's caliber, I applaud the care and comedic undertones of his resurrection which brought genuine laughter to many of my fellow attendees. I know many fans are split between subtitled and dubbed consumption of DBZ, but I personally like the voice cast from Battle of the Gods and this film and rest assured it has nothing to do with our red carpet coverage and more to do with how hard they work. I feel that that the voice actors who bring DBZ to life in the US have a tough job not only in bringing these iconic characters to life for US audiences, but also adding their spin to make them their own.

Dragon Ball Z: Resurrection ‘F' succeeded in making me feel like a kid again and renewing my fandom for the DBZ series. It not only delivered plenty of laughs but a shit load of action that fans including yours truly cheering when it was all said and done.  Make sure you stay after the credits!