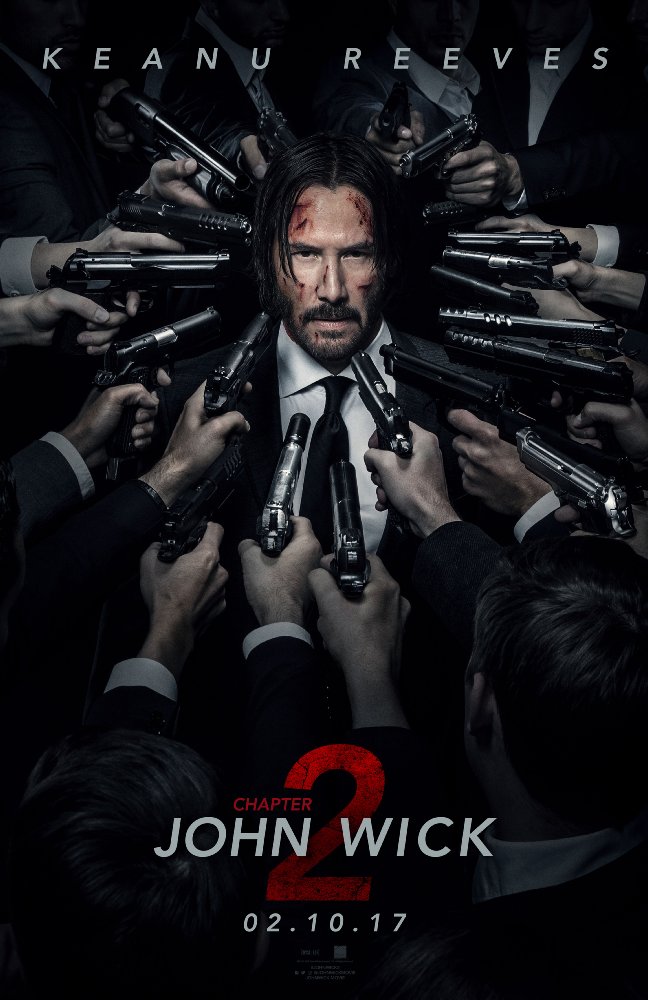 After returning to the criminal underworld to repay a debt, John Wick discovers that a large bounty has been put on his life.- via IMDB

The first John Wick movie snuck up on me and was not only incredibly well done but gave Keanu Reeves' career a shot in the arm in an era where established older actors are jumping into action roles to liven up their résumé. Chapter 2 begins shortly after the first film ended and finds John Wick doing what he does best just to get back his missing car (which he hadn't recovered after the path of destruction he left in the first film). John just wants to quietly mourn his wife with his new dog but the well-deserved rest was sadly short lived as Santino D'Antonio came to collect on a blood debt owed to him. John Wick stood his ground on his retirement, but let's just say that D'Antonio made a strong case for Wick to consider his offer. Once John accepts, we're off to the races and see what “The Boogeyman” is like when he's on a job. Wick does complete the job but you know a twist was coming and it pretty much turned into a kill fest for the rest of the film, which while awesome, really didn't mask how subpar the story was this time around versus the first film.

The cast was solid for the most part, with standout performances by Ian McShane, Lance Reddick and Laurence Fishburne who seemed to be having a lot of fun alongside his Matrix co-star, who he hadn't shared the screen with since 2003. Model-turned-actress Ruby Rose continues her run of appearances in new action films alongside both Resident Evil: The Final Chapter and xXx: Return of Xander Cage,  but for all the screen time they gave her she is largely forgettable and when Wick and her squared off we got a payoff that was a bit of a letdown. Much like Ruby Rose, the film's villain Santino (portrayed by Riccardo Scamarcio) was a bit of a letdown as well since he was the catalyst that put John Wick back to “work” in the first place. It really is a shame when a villain starts off so well and then just fades into the background.

The over-the-top action sequences were plentiful, as the film provided plenty of blank canvas for John Wick as he punched, shot and stabbed his way through adversary after adversary. Kudos to Reeves for taking the time to master dual weapons and close-quarter shooting as it is something that really adds to his portrayal of John Wick.

The conclusion of John Wick's second chapter set up for the final film of the trilogy as well as can be expected with Wick's list of enemies having increased exponentially.

While John Wick stumbled a bit story-wise, the second chapter upped the ante with more guns and a super high body count that moved the story far enough along to keep fans engaged and looking forward to the conclusion of the trilogy. If you're a fan of films like The Killer, Last Man Standing, Desperado and Hard Boiled plus appreciate some good gunfights, then you will appreciate what John Wick: Chapter 2 brings to the bloody table.