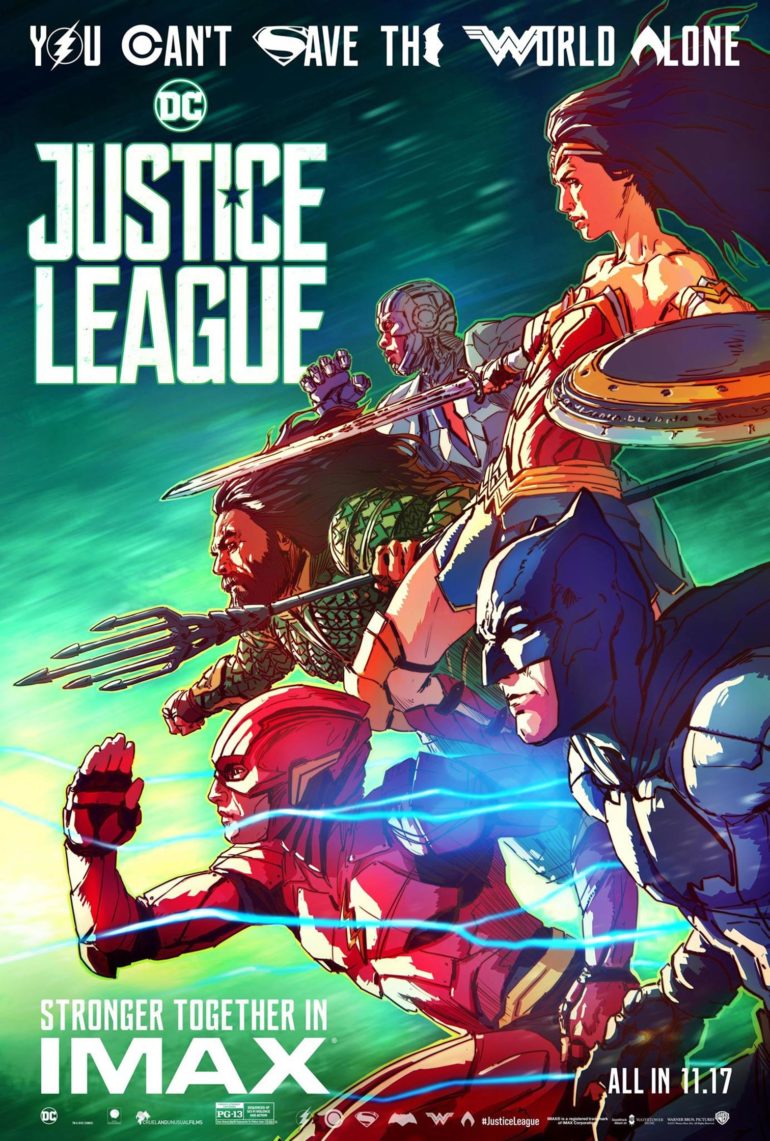 Fueled by his restored faith in humanity and inspired by Superman's selfless act, Bruce Wayne enlists the help of his newfound ally, Diana Prince, to face an even greater enemy.

The Warner Bros. marketing blitz is over and the Justice League are finally on the big screen. Does the League's big screen debut deliver a home run for the DC Cinematic Universe? Sadly, that is not as simple as a yes or no (much like all things DC). As the media reported, the film had quite a few hurdles to overcome including the departure of director Zack Snyder and completion of the film by Joss Whedon along with reshoots, Henry Cavill's mustache, and of course “will he or won't he” when it comes to Ben Affleck continuing to play Batman. All of these issues affected the film, in some cases for the better and in others for the worse. I'll share my thoughts on the ones that stuck out with the big one being the director change. The departure of Zack Snyder was sudden and took many of us by surprise and the announcement of Whedon taking the reigns meant we were going to see some slight changes in tone and honestly the changes were welcome. While the DC Cinematic Universe has embraced a dark tone throughout its films, there is a place for more lighthearted elements. Wonder Woman is a prime example of this as it balanced the lighthearted moments against the darker tones. Whedon brought a solid helping of humor that helped some of the film's characters tremendously, with no bigger beneficiary than the Man of Steel himself. The Superman we see in Justice League captured the essence of Superman as he is seen in comics – a being who puts others before himself and embraces his role of protector with a smile on his face and genuine goodness. This was something that was not shown enough in Man of Steel and ignored in Batman v. Superman. I feel this is the Superman we need to see going forward. Wonder Woman was also well done with the right mix of charm, grace and smiles all while remaining a bad ass. Batman remains an issue though, as you can see the uncertainty in how the character is used throughout the film. In some scenes, we get a Batman that looks straight out of the animated Justice League cartoons and in others we get a Batman who just looks confused on what to do next. I am not sure if this was intentional or just disjointed writing. Batman is a master strategist and the man who is called upon to make the tough calls when others have to deliberate and second guess their actions. We got that at times but in my eyes, it was not consistent.

Aquaman, Cyborg, and The Flash had a lot of high points but also their fair share of low points. Aquaman in the trailers had the makings to be the break out character in the film but you can tell a lot of stuff was cut out for his character by the time the film hit the big screen. I can only hope we get to see the scenes that were left on the cutting room floor when the film arrives on DVD and Blu-ray.  Cyborg on the other hand, was rumored to have received a lot of rewrites and retooling for his character and I feel it may have been for the better, even though the effects for the character fluctuated from cheesy video game graphics to super impressive. It pains me to say it, but I don't think Cyborg is a strong enough character to support a solo outing. But then again, if Ant-Man could make it work there might be hope. Now, Ezra Miller's Flash was a huge concern for me as someone who respects the work that Grant Gustin has put into making The Flash kick ass on the small screen. Miller actually did a solid job with the right amount of quips and quirkiness to look past the overdone special effects and the fact that Flash's running looked absolutely ridiculous at times, fluctuating between speed skating and actual running. Miller had some great chemistry with Ben Affleck and hearing that Batman will also be in The Flash's solo film Flashpoint gives me something to look forward to.

Steppenwolf, the film's villain, was for the most part forgettable but necessary to move the story along and of course lay the groundwork for Darkseid who is the character we all want to see. As I said before, the special effects fluctuated between good and bad and with Steppenwolf it was extremely obvious. There were also some instances where the mouth movements of the character did not match the dialogue which should not be the case with a film of this scale. Speaking of effects, the upper lip on Superman was distracting practically every time he was onscreen. I get the removal of the mustache, but damn did it look piss poor in IMAX! I am sure as the film ages that CGI will only get worse. I am hoping we get some fine tuning when the film arrives on Blu-ray in both standard and 4K.

The general consensus amongst everyone is that Justice League is a “fun” movie which has led to debates that fun does not equal good. I personally think that Justice League was a big step forward for the DC Cinematic Universe in terms of getting Superman right and also increasing Wonder Woman's profile, but also had its fair share of missteps both in the story and with Batman, Aquaman and Cyborg's characters. The Flash stole the show and piqued my interest in future films with his character. I think the short runtime shortchanged these characters and probably left a lot of developmental stuff on the cutting room floor. In terms of story, it seemed either too rushed or just choppy and disjointed.

At times, Justice League feels more like a trailer or a video game than an actual movie, which is unfortunate because this was looked at by many as a make or break film for the DC Cinematic Universe. Some will say that Snyder's vision not being fully realized was a reason for the film's shortcomings, but I honestly felt Whedon made the film feel more like a comic book or an episode of the animated Justice League cartoon and that's something I personally see no problem with.

While I feel comic book purists will either love or hate the film, others will see it like I did as a work in progress for DC with some good and some bad. Non-comic book readers will definitely be overwhelmed at everything going on and to them I say Google is your friend as is your local comic book store. Pay them a visit and while you're at it and grab some books.

3D is not necessary for this film, but if you can find a 2D IMAX showing definitely go that route. There are two post-credit scenes with one being a bit of lighthearted fan service and the other being pretty indicative of what comes next for the Justice League and the forces they'll have to contend with.

What did you think of the film? I'd love to hear your opinions so feel free to share them here or on any of the RW social media accounts.