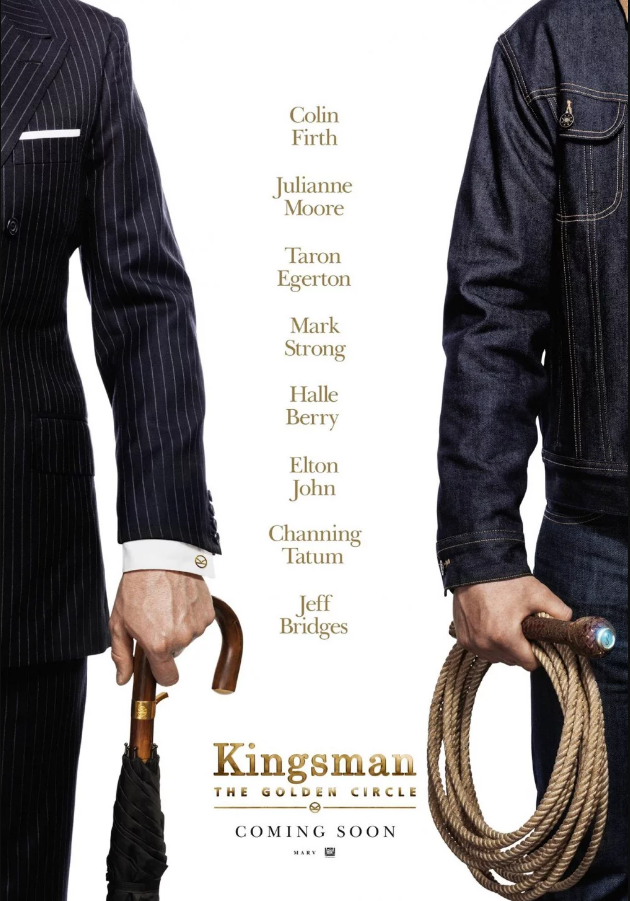 When their headquarters are destroyed and the world is held hostage, the Kingsman's journey leads them to the discovery of an allied spy organization in the US. These two elite secret organizations must band together to defeat a common enemy. -via IMDB

When Kingsman: The Secret Service burst on the scene in 2015, it hit theaters with an unconventional take on the spy genre. The movie did not take itself too seriously and was stylish and fun from start to finish,  plus, it made fans take interest in this relatively unknown comic series. The success of this film came from many elements including top-notch acting and a stellar cast that looked like they enjoyed every second of production for the film. Kingsman: The Golden Circle again exhibited quite a few of those elements, but at times lost itself in trying to outdo the first film both in characters and effects. This resulted in a film that was fun, but not on the same level as the original.

Kingsman: The Golden Circle starts off with Eggsy coming face to face with a past Kingsman recruit-turned-villain with a very Bionic Commando-like arm who is out for blood. This kicked off the film's first over the top action sequence that many saw in the trailers. Eggsy, as usual, had his sharp wit, slick fighting moves and cheeky one-liners at the ready to dispatch his attackers. We find out that Eggsy in a relationship with Princess Tilde. (Yes, the same one who gave Eggsy that special “reward” for saving the world in the first film.) Eggsy is trying to juggle his relationship with his spy work and they collide in spectacular fashion as the bionic arm that was ripped off Eggsy's attacker in the opening scene successfully hacks the Kingsman infrastructure, facilitating the destruction of the organization and its operatives.

What maniac destroyed the Kingsman you ask? That would Poppy (Julianne Moore) the world's most powerful drug dealer who seeks to take over the world from her hidden 1950's themed hideout in the Cambodian jungle, complete with robot dogs and plenty of dispensable henchman including our cybernetically-enhanced former recruit. Poppy leads The Golden Circle a/k/a a super secret drug cartel where members are branded with a 24-karat Golden Circle tattoo and are made over to ensure they untraceable and unrecognizable.

Eggsy and Merlin enact the Doomsday Protocol, which is supposed to assist them in extreme times of need. The enacting of the protocol leads our English super spies across the pond to collaborate with their American counterparts – The Statesman. Our first introduction to The Statesman came courtesy of Channing Tatum who mixed it up with our heroes and revealed a very much alive Harry Hart, who, while missing an eye and his memories, would be crucial for the battle ahead. In addition to Tatum's Tequila, we meet Ginger (Halle Berry) who is the Statesman's equivalent of Merlin as well as their leader Champ, played by Jeff Bridges at his best. Eggsy gets partnered with Agent Whiskey (Pedro Pascal) to try and uncover Poppy's whereabouts and put a stop to her plans.

The Statesman are from start to finish cocky, brash and over the top and the film had a lot of fun with those tropes including a lot of western influences and good old-fashioned macho bravado versus the more refined and stylish gentlemen from Kingsman.

Poppy's master plan involved poisoning all of the drugs she sells, effectively holding millions of people's lives as ransom in order to force the President to legalize all drugs, making hers the most influential drug cartel in the world. The poisoned drugs, which caused a blue rash, would lead to the deaths of countless people if her antidote wasn't given out. This leads to a race against time to thwart Poppy's plans. Along the way, of course, there were issues such as restoring Harry's memory and helping the former Kingsman get back to his old stylish, badass self, plus Eggsy's personal and professional life colliding, and a small subplot involving the US President. That is indeed a whole lot of story, but with nearly 2.5 hours of film time we get it all wrapped up neatly in a bow.

The problem with all this is that too much was going on and while good in some parts, the subplot hindered the film a bit coupled with the fact that certain characters were written out and others just disappeared for large portions of the film. Did we need all the excess storyline baggage? In my opinion, not really.

While the story had its fair share off issues, Julianne Moore's Poppy was my biggest gripe as her character had too much going on, and honestly none of it good. The evil Mrs. Cleaver routine, while interesting at first, became stale as the film went on. We had some sprinkled-in backstory, but not enough to make you give a damn about the character. It was a far departure from Samuel Jackson's Valentine and that is not a compliment. Valentine was compelling and his motivations made a bit more sense in a twisted sort of way.

The returning cast members continued to exhibit a ton of chemistry, especially when it came to Harry and Eggsy, whose bond was one of the more touching aspects of the whole film. Mark Strong's Merlin has always been a favorite of mine and he got some great lines and solid screentime throughout the film which was great.

On the Statesman side, I really enjoyed Halle Berry and Jeff Bridges' work as they crushed every scene they were in. Channing Tatum crafted another memorable performance as Agent Tequila. I felt his work on the character had a lot of elements from his 21 Jump Street work which was a solid approach. It was a shame that we did not get to see more of the character in action as he was far more interesting than Pedro Pascal's Agent Whiskey. Pascal usually doesn't disappoint, but he just did not seem like a good fit for this film. I feel Pascal would have made a solid main villain for a future film.

Kingsman: The Golden Circle did plenty right but also had quite a few missteps along the way, both from a story standpoint and from a character standpoint. Let's see how things move forward for a third installment which was set up nicely in this film's third act.

Kingsman: The Golden Circle was a fun and entertaining popcorn flick that went outside the box when needed and pushed the envelope as necessary, but went light on all the other elements that made the first film a classic. That doesn't mean it sucked, it just means that it did not surpass the original as much as it should have and ran twenty minutes too long.