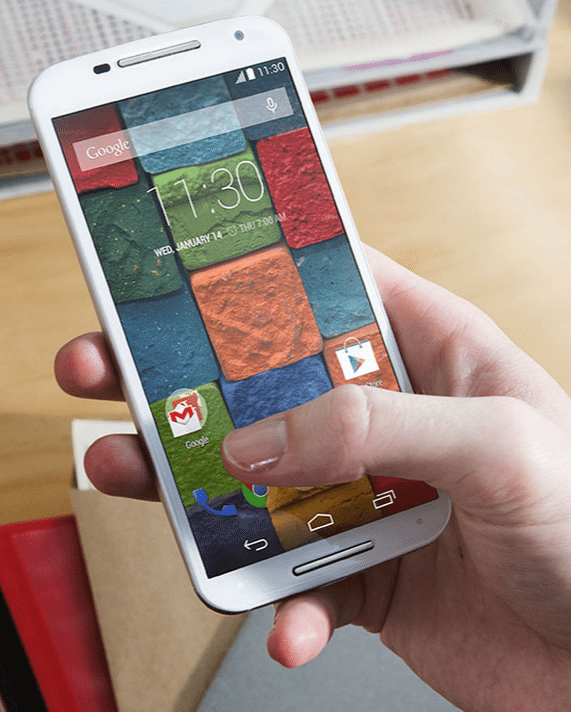 While many are singing the praises of Apple, HTC and Samsung it has been Motorola that has been making waves with their unique approach to not only marketing but also selling the Moto X, which can be customized right down to the start-up greeting. We take the second gen Moto X and put it through the ringer to see if it's worth your consideration.

The second gen Moto X builds off the original Moto X and bumps up every aspect of its hardware. The previously seen 4.7 inch AMOLED screen got a nice increase and now hits past the 5 inch mark at 5.2 inches. Screen resolution saw a bump too, as 720p got moved up to 1080p. The customizable nature of the Moto X makes it a truly premium device with back options ranging from football leather to bamboo. Our review unit came with the bamboo back and everywhere we went it always had people commenting on how nice it looked.

The Quad-core 2.5 GHz processor made multitasking a breeze as graphic intensive apps load quickly, but there will be some issues when you load up the system storage. This I found out the hard way as I loaded some podcasts and music and took a fair amount of photos and videos. The 13-megapixel rear camera delivered solid shots which you'll see later on in our review. The 2-megapixel front-facing camera was solid as well and the quality did surprise me. While the phone is available in 16GB  and 32GB versions, my pet peeve of no expandable memory was prevalent here. As I filled the on-board memory, the smoothness the device had in the beginning started to suffer a bit.

When you look at the device and see the two speakers you think you're getting sound on par with HTC, but that is not the case as the top speaker is for hearing calls and bottom delivers mono sound which at times lacks punch depending on the music or game being played.

The Moto X comes with a stock interface and hint of Moto customization which did not detract from the overall experience with the device. I did get the bump to Android 5.0 earlier this week and it definitely kept most of the stock look. Motorola's bundled apps, while nice additions, did not get used as much as the stock Android staples, but I did like the Moto display feature since it made getting my notifications quick and painless, especially when the phone is on silent. I paired the phone with our review Moto 360 and it truly made our time with the device even better. I tried the Moto Assistant but found its effectiveness lacking as it did not always pick up my commands versus Google Now. Definitely make sure to tweak your activation phrase to something the device can pick up easily regardless of tone. I went with ” Wake up Moto” and it worked roughly 90% of the time versus the stock phrase, but as always results will vary.

I will admit that I have been spoiled by my Samsung Note 4 camera, but the Moto X definitely takes some solid pictures. I do feel that the success rate is questionable since focusing is honestly hit or miss. Well-lit photos do showcase the camera nicely with bright colors and incredible details. Low light photos were the phone's kryptonite, but the ring flash did redeem some photos with a surprisingly even fill.

My wife used the phone since she had the smaller SIM card from her iPhone and the call quality was solid with T-Mobile. I can say that there were no dropped calls and data ran smoothly with apps downloading quickly and videos loading with minimal wait time via LTE. Speakerphone quality is solid and is louder then my Note 4. Speaker placement, of course, helps with the clearer sound, but again, be aware that the speaker is mono.

The Moto X comes with a 2300 mAh Li-Ion battery which lasted almost a full day with a healthy mix of apps, games, and calls. I feel that as devices gain more features that batteries need to get a more noticeable bump. I did have to make a decent amount of tweaks to get a full day's battery life including killing the Moto display feature and lowering the brightness. I did have one particularly busy day where the battery life was not that great.

The Moto X brings the hard sell of customization to the masses, but once you choose a design and spend time with the device its custom build does not mask its flaws but instead wraps them in a nice design for you to stumble upon gradually. When people hear Motorola they think of Droid, which is unfortunate since many felt that the Moto X would embody the flagship mantra. The allure of the quasi-stock Android experience makes the Moto X attractive to pure Android fans and hardcore Motorola supporters, but unfortunately, this device is overshadowed by the Droid and Nexus series and as such it gets lost in the shuffle. If you are interested in picking up a Moto X you can grab one unlocked directly from Motorola and if you are on AT&T and Verizon you can play with it at your local store.