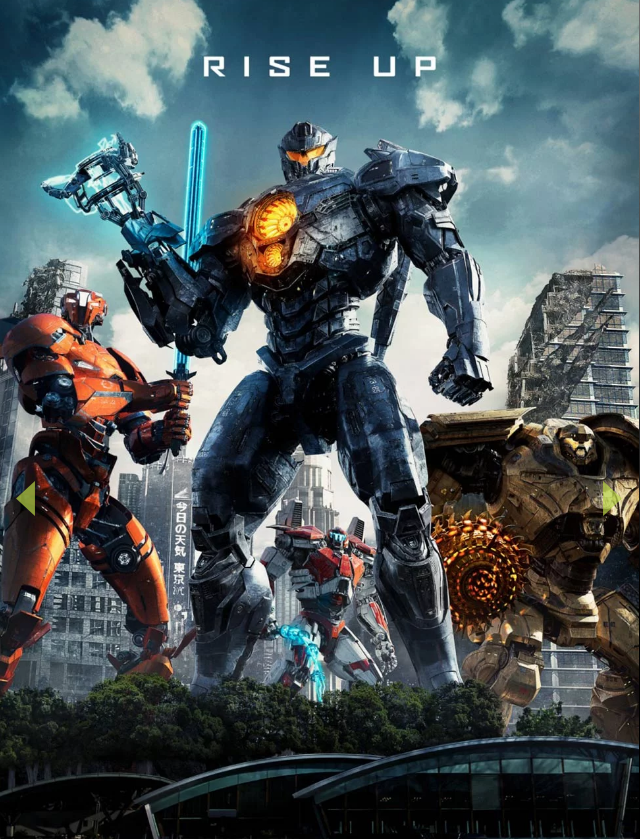 Pacific Rim: Uprising takes place ten years after the first film and the world is a much better place with new Jaeger programs and a closed breach. We are quickly introduced to John Boyega's Jake Pentecost, who is the son of Stacker Pentecost (Idris Elba). While Jake is a resourceful hustler, he is nothing like his father. During one of Jake's trading expeditions, he meets Amara (Cailee Spaeny) who created her own (albeit substantially smaller) single-pilot Jaeger aptly named Scrapper. Jake and Amara end up being arrested and thanks to a timely assist from Mako Mori, the two don't get jail time but instead end up in the new Jaeger pilot program. This sees Jake tasked to train a new squad of Jaeger pilots (which includes the newly recruited Amara) alongside his old Jaeger copilot Nate (Scott Eastwood). The film takes its time establishing the young Jaeger pilots and painting Amara as the outcast due to the circumstances of her recruitment. While we learned more about the pilots, they did not get fleshed out as much as they should have.

The film's Jaegers are supposed to be replaced by a series of newly created drone Jaegers that would remove the need for pilots and essentially kill the Jaeger program. In order for the new drone program to be launched, it requires a unanimous vote with Mako Mori's vote being crucial for the execution of the plan. The vote, unfortunately, was derailed due to an attack by a mystery Jaeger. This new Jaeger had an awesome introduction and squared off against Pentecost's Gypsy Avenger. The result of this initial conflict set the stage for the rest of the film, with the protagonists racing to discover where the new Jaeger came from and what exactly was its purpose. You're probably wondering why I am not discussing the Kaiju and that is because they were not in the film until the final act but when they did arrive, it was truly worth the wait. I also want to add without spoiling anything that the plot twist regarding the film's villain in the final act was a nice touch and unexpected. I truly did not see it coming.

Seeing the new Jaegers in action was amazing in IMAX 3D due to the improved effects. The Jaegers had more fluid movement and more importantly, each one had a truly unique look much like the Jaegers in the first film. The crew from the Transformers films should take notes in that regard as most times in the Transformers films it is hard to tell most of the robots apart especially when it comes to the Decepticons.

The Jaeger and Kaiju fights looked impressive onscreen and the scale and destruction were extremely well done with the camera work keeping you right in the middle of the action. Most times, fight scenes move so fast you miss a lot of moments but Pacific Rim: Uprising made sure you were in the mix from start to finish.

While the film had its fair share of good, it did have some missteps as well. Acting wise I felt Boyega led the film well and had the right mix of humor and heroism to carry this series into the future. Spaeny's Amara was solid too but at times her chemistry with the other cast members seemed forced or inconsistent. I am hoping that if the character is back for a third film she is written better. Scott Eastwood is usually someone who I shit on due to his lackluster acting and while he was better this time around, he too suffers from lack of chemistry with his costars. Even though he and Boyega supposedly had piloted Gypsy Avenger before it sure as hell did not seem like it. Their scenes seemed forced and lacked any sort of connection that should be there given their minds are linked in the Jaeger.

There were some missteps from a writing perspective as well. The writers seemed to want Boyega to play Jake Pentecost similar to his character Finn in Star Wars. While he was a badass and a rebel, I felt he was at times trying too hard with the one-liners. Please don't pigeonhole Boyega into playing every hero the way he plays Finn as it hurts the characters and detracts from the story. The film's writing also at times gave too much away before it happened on screen. You knew immediately just from the dialogue who was not making it out of the film alive which is a shame because one the film's early deaths was seen a mile away no thanks to the writing. Let's not kid ourselves, we are not expecting Oscar-worthy writing as it is still giant robots punching monsters in the face, but there should be a bit more focus on ensuring the writing is compelling without giving too much away.

Pacific Rim: Uprising came out of the gate swinging with a younger cast, cooler Jaegers and a better story than its predecessor but it wasn't without its shortcomings. The bulk of which came from a somewhat rushed plot that course corrected in the films final act. Boyega had the presence and charm to breathe life into this franchise and I look forward to seeing more of Jake Pentacost and his team. It was, in short, a fun popcorn film.

There is a quick mid-credit scene that sets the stage for where the series is going next if a third film is greenlit so don't run out the theater.