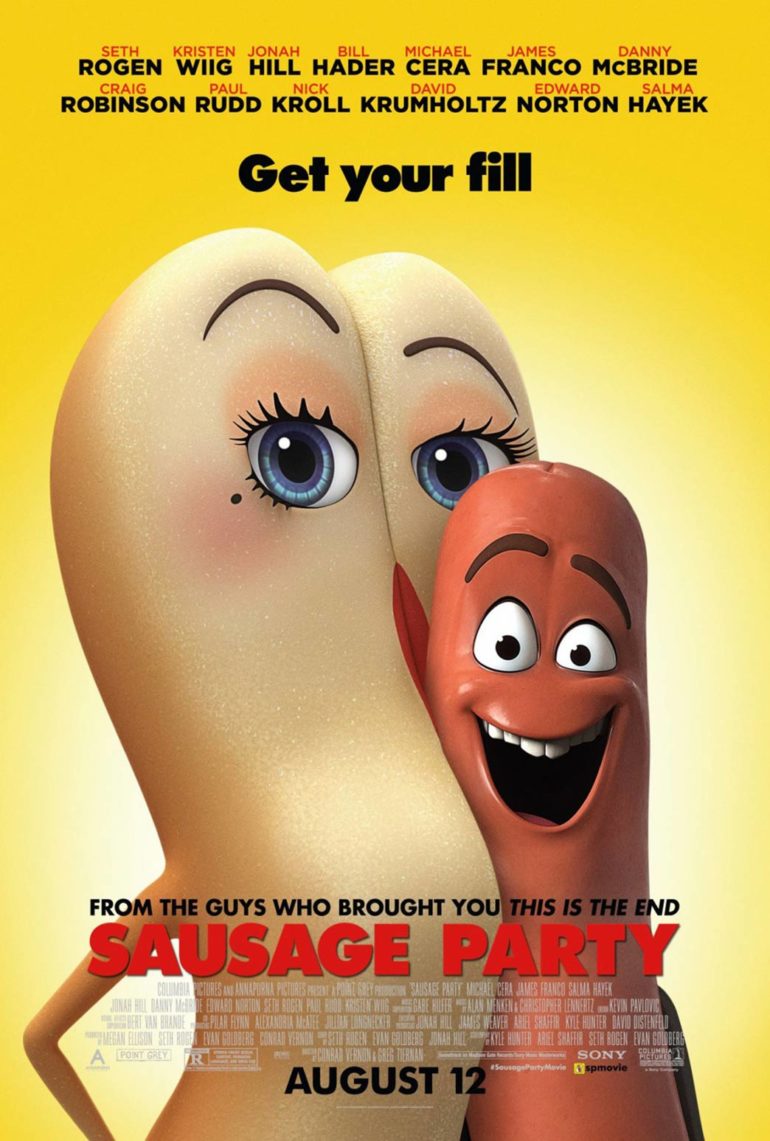 A sausage strives to discover the truth about his existence and the consequences of that discovery change everything.

Where do I begin with Sausage Party? I guess we can start with the obvious, which is the fact that Sausage Party is not for kids or the easily offended as there is lots of crude humor laden with a lot of race jokes, dick jokes, drug use and sex. I say this not as a negative, but as a primer for anyone who heads to theaters to see this film. The story follows a relationship between a hot dog named Frank (Seth Rogen) and his love interest which just so happens to be a bun named Brenda (Kristen Wiig).

All of the food in Shopwell's live each day looking to be chosen by the “gods” and leave the supermarket for the “great beyond”. In Frank and Brenda's case, it also would allow them to consummate their relationship. The story goes balls out shortly after Frank & Brenda decide to “touch tips”. A returned Honey Mustard jar reveals what really happens to food when it leaves. This reveal from Honey Mustard was a moment where I found myself laughing quite a bit. Honey Mustard sets off a chain of events with the end result being a Saving Private Ryan-esqe sequence that separates Frank from his package of hot dog brethren and Brenda from the other buns. This sequence also creates the film's villain who just so happens to be a douche. A literal douche. The story then shifts to Frank's hot dog pals that made it to the great beyond and how one deformed hot dog named Barry tries to get back to Shopwell's to warn everyone of the truth as well as save Frank to atone for his inaction in the earlier part of the film. While Frank and Brenda do reconnect, the revelation from Honey Mustard leads Frank on a quest to find out the truth about the great beyond and the gods who choose them. This leaves Brenda, Teresa Taco, Sammy Bagel Jr. and  Kareem Abdul Lavash to fend for the themselves until they reconnect with Frank and accept the truth of their existence. We get a grocery uprising ending so insane that you will wonder how the MPAA let this film through with just an R rating.

In between all the jokes there were some underlying messages about religion, prejudice and accepting your fellow man (or in this case fellow food product) that were executed well, albeit gift-wrapped in some over the top crude humor. Racism and religious prejudice were acknowledged in a smart and creative way, especially in one scene with Bagel and Lavash arguing over “shelf space”. This exchange echoed the real world conflict between the Israelis and Palestinians and was cleverly done.

Rogen and his crew fought for a long time to have this film made and while R-rated comedies are common place nowadays, it is very rare that an R-rated cartoon hits theaters and delivers some good old fashioned raunchy comedy that created real laugh out loud moments. I think the risk taken on this film was worth it and it will surely lead to repeated viewings (at least from me).

If you loved the old raunchy comedies of the 80's and 90's and the recent Rogen projects, you will surely enjoy this film. I recommend you approach the film with an open mind and just relish in the insane things you'll see on screen especially during the ending which is something your eyes won't be able to unsee.

Lastly, this film is NOT for children in the least -no matter how “mature” your kids may be or how mature you think they are. Let's not have another Deadpool fiasco folks.