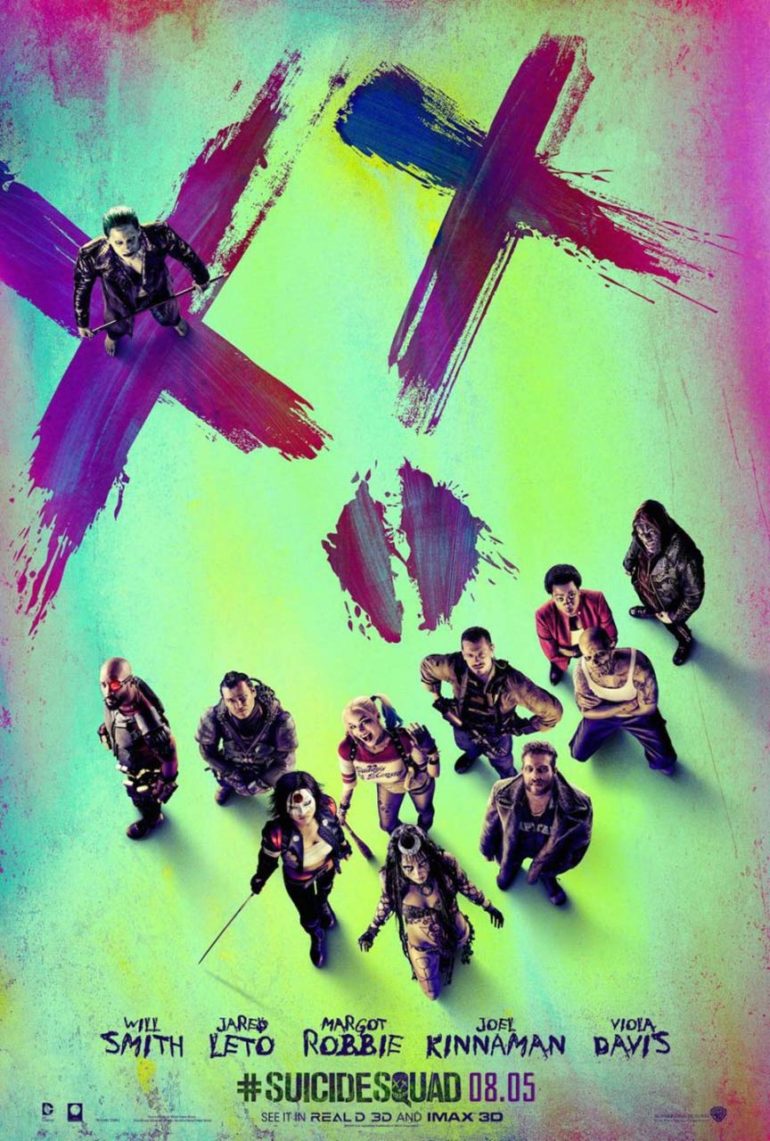 A secret government agency recruits a group of imprisoned supervillains to execute dangerous black ops missions in exchange for clemency, which inevitably leads to chaos.-via IMDB

When the first announcement for a film adaptation of Suicide Squad was made, I wondered about a few different things. The first of those being which members would appear and would DC be able to launch a film with so many characters people hadn't heard of and expect it to be successful. A few of those concerns were remedied as casting took shape, but alas some questions still remained – including how Jared Leto would fare as the Joker. Were audiences ready for a new clown prince of crime after Heath Ledger's stellar performance in The Dark Knight?  I was also concerned that the film would push Harley Quinn over the other characters since she was the one with the most mainstream appeal. As you can see, a lot of what went on with this film concerned me and caused me to question if the buzz (as well as the negative feedback) was warranted. We fast forward to this past Saturday as I watched the film in RPX at my local theater and let start off by saying the story left a lot to be desired.  While they did a decent job on spitting out origins for the team I still felt a bit more could have gone into it, especially since there were quite a few characters who were making their mainstream debut. The story did have some high points and most involved Amanda Waller, Deadshot and Harley. Viola Davis made Waller not only believable but reinforced her take-no-shit attitude that long-time fans will appreciate. Waller was far more than Nick Fury in a dress and I attribute that to Viola Davis and her stellar performance. The individual cast work varied from character to character but as I mentioned before, Will Smith, Margot Robbie and Viola Davis shined everytime they were on screen. Jay Hernandez and Jai Courtney need to be acknowledged as well as both their characters not only had great onscreen moments but mixed it up well with their costars. The other members of the Squad played their parts well but were forgettable at times, with Katana being the most forgettable of the group. This was unfortunate given the characters' presence in the Suicide Squad books. Enchantress was another forgettable character albeit in part due to Cara Delevingne's subpar acting, which was average at best.

Will Smith's portrayal of Deadshot blew me away as it showed how genuinely versatile Will Smith is and how effective he was in humanizing a killer. When I walked out of the film I said to myself that we need to see more of Smith as Deadshot, especially alongside Ben Affleck's Batman.

Jared Leto's Joker showed potential and made we want to see how he would look alongside Affleck's Batman, but the minimal screen time was insufficient for me to form a full opinion on the character. This is a shame because I see the long game with the character and if the Joker's recent runs with Batman in the books are to be taken as source material then we have barely scratched the surface of the dynamic between the two characters. We can only hope that the solo Batman film expands on the story and captures the chemistry these two have in the books. I will add that the chemistry between Leto and Robbie varied throughout the film and had moments where it looked right out of the books and at other times lacked any real spark between the characters.

I genuinely felt the story had quite a few weak moments and at times felt rushed. The pacing from the characters' introduction to the reveal of the film's “big bad” seemed like it was all of five minutes and it was made worse by the cuts that looked like they were added during the re-shoots.

When it comes to the special effects, they varied from incredibly well done to “holy cow does that look bad“. Kudos to the makeup team for making Killer Croc look as good as he did and still allowing him to emote when it counted.

Warner Brothers still has a lot of work to do when it comes to DC films and we can only hope they see their missteps and correct them with their future films.

While fans are divided on how good Suicide Squad is, I have to say the film is worth checking out as it is another building block in the foundation of the DC Cinematic Universe and has some standout characters and moments worth seeing even with a fair amount of shortcomings storywise.