Most people will agree that Mondays suck. You go back to school, you go back to work and oftentimes you have a generally bad day. People talk about their weekends on Monday. And when you really don’t care about someone’s weekend, most people feign interest. Most people do not say “If I cared what you did on the weekend I’d stick a shotgun in my mouth and pull the trigger with my toes.” Then again, most people are not Malory Archer and most of them don’t get diagnosed with breast cancer over their weekend. Talk about a downer double whammy.

Malory drags herself into the office and after some extremely messed up exchanges with Cheryl, Cyril and Pam, Lana wants to know why she is being such a bitch. Malory attempts to confide in Lana that she had a mammogram over the weekend and that the doctor found a lump. Of course, Pam overhears and we all know how great Pam is at keeping secrets. She’s actually texting the whole office while Malory is telling the two of them to not tell anyone. This brings in Cheryl, Cyril and Krieger, all of whom try to show sympathy which gets shrugged off by Malory. Since everyone knows now, she wants to make sure no one tells Archer, who happens to walk in at that moment. He’s not a complete dumbass, so he figures that there is some secret they are not telling him. Sterling however, is not a world class secret agent for nothing; he knows how to squeeze people for information. He looks at Pam and speaks her name and that’s all she wrote on that secret. Archer passes out from shock, but it is not due to concern for his mother.

In the next scene we find the Archers in the doctor’s office and Sterling is asking if men can get breast cancer. The doctor says it is very rare but Archer insists because he says it is also hereditary. The doctor asks if his family has any history of alcoholism – mind you both of these idiots are sitting in the doctors office sipping out of flasks. Then he asks if there is any unusual exposure to radiation. Cut to flashbacks of Archer on two separate missions. In the first, he is aboard a submarine and he’s opened the warhead on a short range tactical nuke (after being told not to). Then he’s in a hotel room with a Russian spy he’d seduced and she is looking for her plutonium – the plutonium this idiot has taken out of it’s lead container and is waving around like it is chewing gum. Not to mention the nurse he boned in front of an active x-ray scanner. So of course when they do the scan, Sterling has a mass in his chest that looks like a boss battle from a Final Fantasy game. 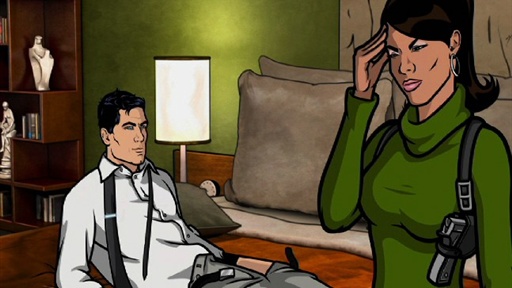 Back at the office, Archer delivers the bad news and Malory is pissy that the attention has shifted away from her. The doctor informed her the test was a false positive. Archer actually starts acting like a human being and the night before his surgery he and his mom open up to each other – with lots of liquor. Malory asks Lana to take Archer’s drunk ass home where in his liquor-induced moment of clarity, he confesses his love for her. Considering he might die, she stays the night with him and he wakes up four hours late to his surgery, which his doctor announces a success in the waiting room. At the celebration party, Archer tries to have a heart to heart with Lana which is interrupted not one, not two, but three times by the doctor. On the first call, he says the cancer spread to Sterling’s lymph nodes; then he says he mixed up the charts and then he says he was definitely correct about cancer spreading to the lymph nodes. Talk about a downer double whammy.

Just needed to fill this space with something idiotic.

The preview for this episode should have started with “On a very special ‘Archer,’” just to poke fun at all those 80’s TV shows that had the “sensitive issue” episode. I think this episode broke a record for classic lines. The show opened with Malory’s shotgun in the mouth line and just went to town from there. There’s a scene where one of the ISIS drones makes fun of Archer for having breast cancer and Sterling starts beating the shit out f him. Cyril remarks that he “certainly doesn’t have cancer in his fists” and Ray just remarks “he is beatin’ his ass.” Pam texting the office about Malory’s condition was classic too. But I think Pam ham-fisting the bear claws stole the show. I think that part was extra funny because I saw Amber Nash record that part and she explained how something so simple as making ravenous eating noises was difficult because they wanted a specific sound from her. Look up Amber Nash and see how “not Pam” she looks and then imaging her stuffing bear claws in her mouth. Everything about this episode is so wrong from Archer tattooing the wee baby Seamus’ name on his back and having “Archer” tattooed on Seamus to the doctor hitting on his patient’s mother. So wrong, but so funny to watch. And I called it, I told you that Archer and Lana would hook up again – it may not be permanent but it still happened. With at least two more episodes left in the season, who knows where this roller coaster of stupid will end up? Me, I cannot wait to find out.