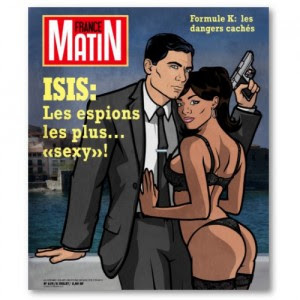 When you’re a world-class secret agent, you have your good days and your bad days. Some days, you catch an international criminal or save some foreign dignitary’s daughter. Then there are days where you lose a contract to a rival agency or get shot in the foot by your ex-girlfriend, twice…in the same spot. When you’re Sterling Archer, it can be difficult to tell which is which is which. On days when you start off with your mother referring to you as a “colossal fucking idiot,” it is pretty safe to say that the day is not going well.

Archer walks into his mother’s office, only to see Trinette, the call girl he used to frequent. Malory is pissed but oddly quiet since she doesn’t want to make the baby cry; the baby that might be her grandson. A blood test is ordered and Odin decides to oversee it to make sure Archer does not tamper with the blood sample; the one-liter blood sample. The office decides to throe Trinette a really late baby shower at Archer’s place just because they know it will piss him off. Malory tells Archer that he has to break into the vault where the blood is being kept and swap it with someone else’s. This is no easy task considering he has lost a full liter of blood and foolishly decided to replenish it with alcohol. Fortunately, Odin agents are even worse than he is so he somehow manages to make the switch. This brings us to the blood test, the hilarity of which I am leaving to you to see for yourself.

Season 1 of Archer has been properly wrapped up and now we are seeing the seeds of what Season 2 will be. Malory will continue to be a bitch; Archer still doesn’t know who his father is and Lana may be falling for him again – which will likely drive her insane. Also, Archer has to deal with being a father, or at least somehow proving that he isn’t one. All of this will be wrapped up into the general insanity of sexual deviance, drug addiction and illegal human experimentation that is the daily office life at Isis. It is sure to be quite a wild ride and I am glad I got on early.