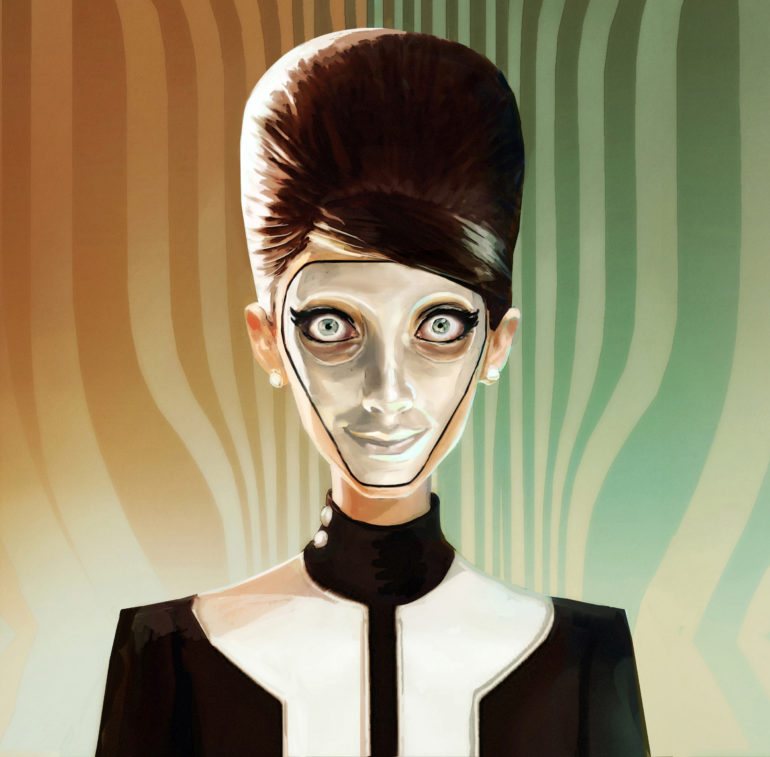 We Happy Few is a first-person, action RPG with a survival horror theme. The game itself will not be complete until sometime next year. Regardless, the good people at Compulsion Games allowed us a sneak peek. I felt the need to get my hands on this game because the trailer gave me the impression of being back on Rapture in its heyday. If you have no idea what I am talking about, pick up a copy of the classic game BioShock. Both games feature people who are not quite right for “normal” society for one reason or another. Bear in mind that this is an impression of an alpha build of a game; the final version may be drastically different along with my opinion of it.

NOT SO HAPPY-HAPPY, JOY-JOY Welcome to London in early October of 1964. This early access version of the game lets players explore through the eyes of Arthur Hastings. His job seems to be censoring old newspaper articles. Confusion sets in (for the player) immediately. Why would I be censoring articles that are nearly twenty years old? Arthur does not question this until he happens upon one from 1947 featuring himself and his brother Percival. Suddenly he hears the cries of his brother who clearly needs help. “When life annoys, top off your ‘Joy.'” Joy is some sort of emotional stimulant and/or depressant. It makes you happy regardless of what your life situation. It makes you see the world through rose-colored lenses. As Arthur decides to not take Joy, he starts to see things as they truly are. A woman who appears to be in a supervisory capacity (her father runs things) notices immediately. You are labeled a “downer” and police chase you. Despite them cornering and beating you, you wake up in a place where you have seemingly escaped.

The story draws you in; that opening is what was shown as the game's initial trailer. Being able to play through it gives you a lot to ponder. The world outside is not the 1960s London from our history. Demolished buildings and a terrible state of affairs for the citizenry. Probably has something to do with the article on Arthur and Percival which mentioned war with the Soviet Union.  Thus far, the narrative is fantastic because there are so many questions to be answered. Why do people all wear those creepy masks? Why did Arthur have that job, especially when the news articles were just being discarded? What happened to Percy and most importantly: What is Joy? The way in which the final game handles these questions will determine the quality of the story. Like many of the masked people, I am hooked thus far.

BITTER DANKESCHOENS We Happy Few is what you would expect in terms of a game that I would liken to BioShock. You have to collect and craft items in order to maintain your character and to proceed in the story. There are moments where you maybe given quests by NPCs in need or come across random quests on your own. You have a relative amount of freedom of movement. You are able to climb things that the average person would be able to in real life. Running and/or exerting yourself too much will bring about temporary fatigue. You also have to maintain the basic needs of your character. Hunger, thirst and tiredness have their own gauges. In the area I have explored thus far I have found very little food other than what is on your person. There was plenty of water however and you can (so far) return to your hideout with ease to sleep.

The controls for the game are tight and responsive for the most part. The options let you fiddle around find what works best for you whether you use a controller or mouse/keyboard combination. It is worth noting that the onscreen commands for a controller refer to that of the Xbox One (mine is for 360) but that only differs by one button which is in the same place on both. Tracking quests is simple enough, I just have to figure out how to accomplish them. Most of the hurdles of control can be attributed to “new player rust.” Once you get used to them it will be second nature. I only have two major complaints thus far. Climbing into abandoned houses can easily result in getting stuck and needing to restart. That might just mean that I shouldn't be there but I was trying to explore everything. The other is time. Day provides much needed light and it does not last long at all. In less than a minute or two I noticed that four hours had passed in game time. This ties into the bodily needs of the character. Arthur seemed to get hungry minutes after feeding him and the same went for thirst and sleep. There is plenty of water in the starting area and he even has a canister he can fill for a few drinks. I just feel that time needs to be slowed or at least give us the option to do so. Considering the time left before the final version, I see no reason that this will not be addressed.

NO DOWNERS ALLOWED It does not take much to see that this is a dystopian view of 1960s London. I have not found my way back in to “civilized” parts of town as yet. Even those areas seem a bit worse for wear; the guard towers on the bridges are a mess.  The art design is looking very good; polish is needed but there is a lot of detail put into the game space. From detailed cobblestone roads to the swaying of bushes in the breeze, the world feels realistic. That of course makes the game more disturbing which is also good for the intended theme. The water definitely needs work; I am a big fan of water effects and they are lackluster thus far.

Where the graphical end of the game is looking promising, the audio is a bit wonky. The music is great as it is trippy and mildly depressing. The problem is that it is very low. One could say “turn up your speakers,” but that presents its own problems when dealing with all the other sounds my computer makes. When playing with my speakers at their average volume and all game audio maxed, I can just hear the music and voices. I do not see this as being a big problem to fix but it is worth mentioning.  The forums show other bugs that I personally have not encountered (yet). Nothing seems to break the game for me and that is always a positive. I look forward to seeing what Compulsion does with the final product.

But what if he has a pointed stick?

I believe that We Happy Few will be a very good game. I hope that it will be up there with the likes of BioShock and other action RPGs. of its ilk. The story is nothing terribly original but it is compelling. You are tossed into this wacky “Laugh-In on crack” style world that looks like Austin Powers' worst nightmare. This makes me personally want to know how people got to this point and whether they can be saved from themselves. Discovering what joy is and who is behind this all will go a long way to make gamers see this game to its conclusion. The graphics will play plenty of tricks on the mind and seeing things on Joy vs reality is going to be interesting to say the least. Technical issues aside, this is definitely one to keep on your radar. By placing this in the hands of the public so early, Compulsion Games has the tools they need to make as many of their fans happy as possible. I implore them to make the final release “snug as a bug on a drug.”