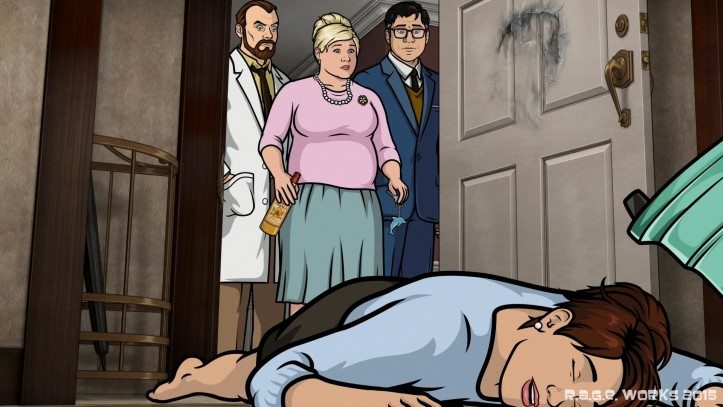 I want to make a Peppermint Patty

Archer is in surprisingly high spirits for someone that recently took five bullets in the back. He is also surprisingly mobile, but I will not dwell on that. Malory’s agents, as inept as they seem at times, have successfully pulled off two missions for the CIA. This has to mean at least one of two things. First, the CIA is going to trust them with more difficult, yet more important missions. The other is that somewhere along the line, the team (most likely thanks to Archer) is going to mess up. If that is not bad enough, Archer’s past seems to be catching up to him. Regardless of the fact that Conway Stern was forced into his face both times, the fact remains that Archer has a lot of enemies. He has been lucky so far but when you are always in close proximity to your newborn daughter and her mother, somebody is going to go for your weak spot. It might be time to put his newfound CIA connection to good use and tie up some loose ends; before they tie a noose around his neck.

The Justice League this ain't

ALPINE ANTICS Despite the fact that the HR admin is the best fighter in the building and the accountant is a trigger happy former dictator, Malory only has three official field agents. Sterling, Lana and Ray are said agents and they have been given an assassination mission. Lana does not seem too happy with that as she has killed people before, but it has never been her specific mission to do so. Archer reasons that they will be saving lives by taking this one because the target is, in fact, an assassin. Of course, no mission given to them by the CIA is as simple as it seems because the target is in the Swiss Alps on a mountain climbing excursion. Let’s make it even more difficult when Malory gives the mission dossier to her beloved son who, as we learned in season three, never reads the dossier. He also left it on his toilet so the only clue they have to go on is that the assassin is from a country that was an Axis power during WWII. This might be a helpful piece of information if the guests did not include a man from Germany, one from Italy and a lady from Japan. That doesn’t matter though because Ray forgot the gum so let’s just put all the blame on him.

DON’T WORRY ABOUT IT Malory took some time off while her apartment was fumigated but did not bother to tell anyone. No one would likely care except for the fact that she has baby AJ with her so Lana was a bit worried when she could not reach her at the office or at home. She asked Pam to check Malory’s apartment and Pam proceeds to bring the whole office with her since they were all celebrating Cheryl’s birthday in the “janitor’s closet.” You would think four drunken idiots trying to break down a door with a potted plant would cause neighbors to call the police but that just goes to show how popular Malory is with her neighbors. Now, there is a reason that you leave a home for a while when you drop bug bombs. Roaches can live in environments that almost nothing else on Earth can survive. So it is no wonder when you see these idiots passing out and throwing up as they spend hours in the apartment looking for Ms. Archer. Actually, I am a bit surprised that it bothered Cheryl at all with all the glue she sniffs and eats.

TEUTONIC BUTTS Back on the Peak of Death, Archer almost gets Lana and everyone else killed after he finally remembers who the assassination target is. He only comes to this revelation after Crash, aka Patrick McCarrin already killed the three Interpol agents that were after him. Archer was oddly calm when he shot McCarrin in the arm, even after he’d warned that the gunshot would trigger an avalanche. Archer was then oddly excited as the avalanche swallows all four of them and destroys the cabin they were staying in. I guess what is most odd is that Lana, Ray and Archer all come out of the avalanche with only minimal bruises. On Archer’s suggestion, they all agree to assume that Crash died in the avalanche. Before this season is over I think that poor choice will come back to bite them in the ass.

It's OK Cheryl, I didn't know what Ceviche was either

This season of Archer is off to a fantastic start and I guess it would have to be in order to top Archer Vice. Honestly, if you are watching this season and have not seen all of the others you need to stop right now and go get the discs or hit up Netflix or something. A lot of the jokes are for fans of the show. I almost do not know where to start with this episode. You have Ray at the beginning sobbing as he recalls the lousy treatment he got from his father. That ties back to season four when we met his brother and his past was discussed. We have almost twin idiots in Archer and Cheryl, who can make complicated references to world history and historical figures but don’t know simple things like the color of watermelon flesh or that loud noises are a no-no on a mountain. The last time we saw Malory's apartment was during season three when she threw a phony dinner party to cover up the fact that she’d murdered the Italian prime minister. Every time I see Pam’s back, I am reminded of the time she was so pissed at Malory for bartering with her life that she beat the shit out of her. I loved Krieger’s ringtone which was made to be the German version of another Archer ringtone, “Mulatto Butts.” And if you need any explanation of where that thing in the hot tub came from, you live a sad existence in my professional opinion.

There's something alive in here

The one thing I am not so much liking is how Archer keeps surviving things that no one should, like an avalanche to the face. I get it that he has survived a space shuttle crash and the sheer force, pressure and freezing cold of the ocean floor, but those things usually only happen once per season. I really hope they do not make it a habit of making Archer and crew into, well, cartoon characters. Make no mistake, I do not want Archer to die or suffer serious bodily harm, I just want the writing to be a bit more creative in how he gets out of life or death situations.

Oh yeah, and Ray did not forget the gum, he just didn't bring enough for everybody.

“I'm just gonna sit here and enjoy my damn gum!” That Lana, is how you get ants.