Ten years ago, arcade racing had a much larger presence on consoles. A large contributor to this was the now defunct publisher, Acclaim. Back in 2001, along with a small developer called Criterion Games, they introduced Burnout. The series gave gamers more of a Need for Speed than that franchise could ever hope. In 2008, Criterion released their magnum opus, Burnout Paradise. Culminating everything its predecessors had ever done, the Paradise City adventure was loved the world over. Instead of giving us a follow-up, EA has decided to (once again) pull a double-dip and give us Burnout Paradise Remastered. Time to find out if the grass is still green and the girls are still pretty.

Burnout Paradise Remastered – Is it Really?

Burnout Paradise Remastered is an arcade-style racing game as I mentioned earlier. As such, there is very little in the way of story to be had. DJ Atomika (Mark Hildreth) welcomes you to Paradise City, explains your situation and hands you a learner's permit. Your mission is to best the other “burners” driving around the city. Doing so will eventually upgrade your license in class until you reach Burnout Elite status. In the process you will also obtain a buttload of vehicles to help you progress. Get in your car, annihilate your competition and paint the town black in your tire tread marks. Please try to keep swearing at a minimum as DJ Atomika annoys the crap out of you.

The word remaster is defined as altering or enhancing an older product. Burnout Paradise Remastered is definitely altered from the original, but none of the gameplay is enhanced. The game plays exactly the same except that you can no longer send mugshots and smugshots. This is weird because you can still take a picture for your license if you have an attached camera. The online is now less stable than in the original release. Freeburning online tends to come to an abrupt stop – get this, when you crash your vehicle. The seamless transition from off to online is still there; you just have to wonder if it is going to last.

Aggression Should Always Be Ruthless

The core of Burnout Paradise is still present. All the races, stunt runs, road rages, etc. were retained. Most of the cars are still there. Cars that required code entry are no longer available. While understandable that sponsors from ten years ago are no longer present, generic liveries could have been used. Regardless, with 150 playable vehicles, you will only miss those cars if they were your absolute favorites.

You might think that 150 cars is overkill, but you will notice the minor differences as you progress. Aggression cars are tougher; stunt cars more agile and speed cars are well, faster. Top that off with the enjoyment of specialty cars:

Add bikes, cop cars, toy cars and then some and you have a serious variety to choose from.

I will say it over and over again that Burnout Paradise was a fantastic game to play. That was back in 2008. Today, controllers are somewhat more precise. No tweaks whatsoever were made to this game in terms of play control. You start a car with the intention of going straight and it veers to either side. This makes pretty much every timed mode frustrating due to car crashes that should not have happened. It is one thing to have an opponent slam you into the wall; when it happens by yourself, frustration rises. 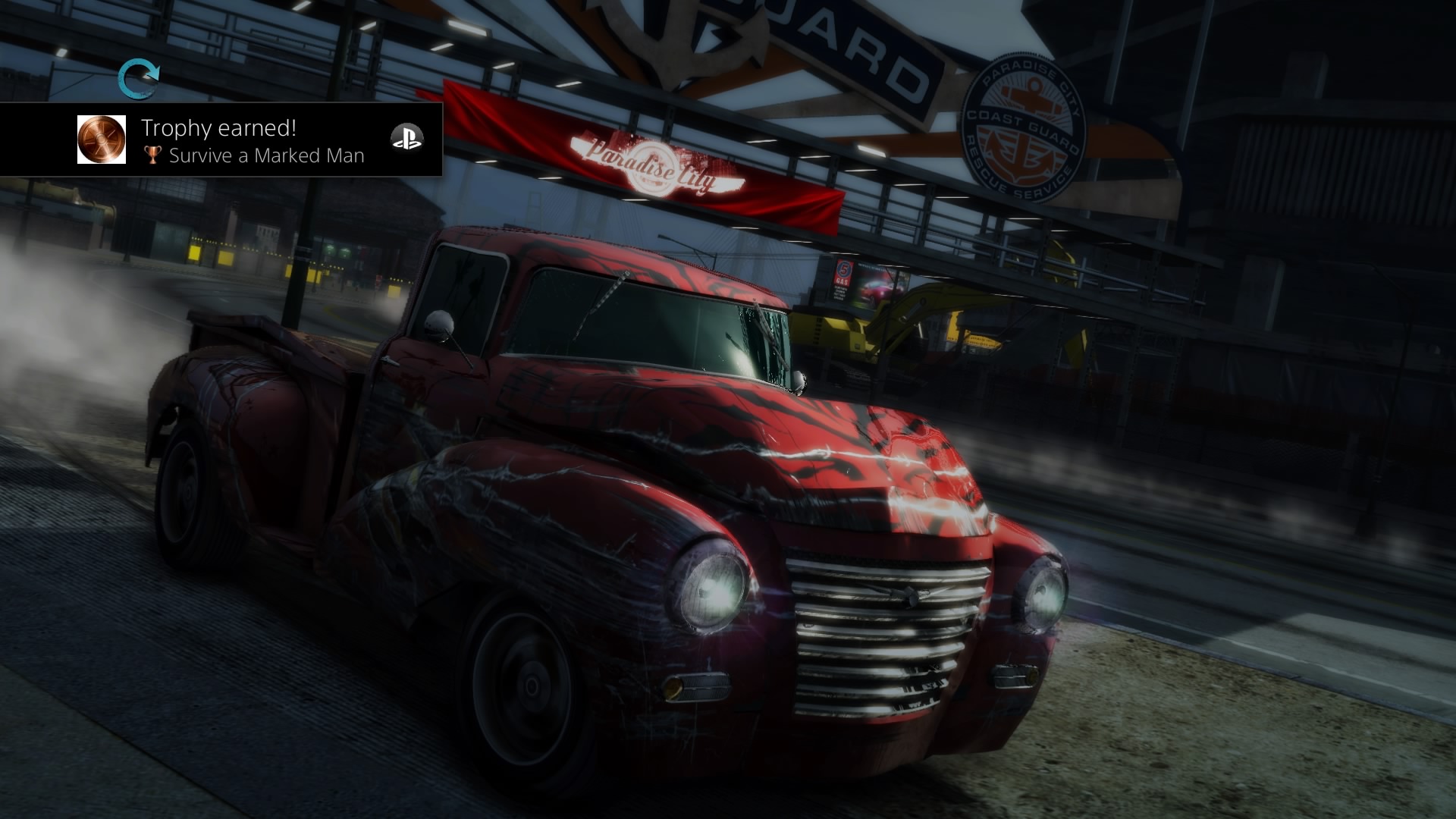 The Girls Are Not So Pretty Anymore

Please do not misunderstand me; Burnout Paradise Remastered is a good looking game. The issue is that it's beauty lies in the graphics of 2008. What is branded as “remastered” is actually a port with improved framerate and increased resolution. The PS3 version topped out at 720p; on PS4 PRO it can go up to 4K. Improving the resolution on yesterday's graphics only makes it more apparent how dated the game is. As an avid GTA Online player, I appreciate fancy cars. GTA Online has detailed rims; Burnout Paradise Remastered has decals for rims. Surfaces are texture-free, jaggies and screen tears abound. The game gets away with it because it is hard to notice this at 200+mph.

Verdict: Is the Grass Still Green?

Please understand that I love the Burnout series. It is by far my favorite racing franchise. That said, I cannot recommend this game to everyone. If you have never played Burnout Paradise then this is a great find. If you want to relive 2008, make sure you have at least three or more friends buying it with you. In either case, this port is not worth $40. Developers would have to try to make this game bad but nothing was done to improve it.

Visibly, Burnout Paradise Remastered still looks like a last-gen game; 4K upscaling did it no favors. The controls are very loose for some vehicles, sending you into walls while you are attempting to drive straight. I have no idea how the online was messed up. I put countless hours into the original on Xbox 360 and PS3; never had an issue. I have had multiple crashes on this version – one even caused the PS4 to restart.

The original game sold nearly two million copies, with over one million in the US alone. A remaster is not what fans need – we need a new installment. Bottom line is that one should not spend full price on Burnout Paradise Remastered. While it will give you a lot of enjoyment, I would not value it above $19.99. Let the buyer beware.