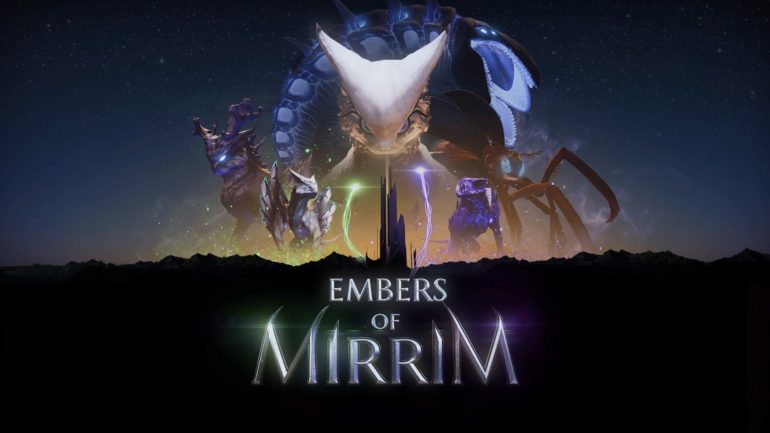 I am an old school gamer. You might just call me an old gamer. I started playing games before the internet was a part of daily life. Competitive gaming meant your friends came over to play Street Fighter II or WCW/NWO Revenge Let's be honest, it meant Double Dribble for me. Being an only child, single player games were a huge part of my gaming childhood. Platformers were a staple back then.

Today, everything is online multiplayer e-sports super competition. Some of us however, still appreciate the old school jumping to avoid pitfalls. The thrill when you finally get that boss pattern down and beat them and getting to those end credits. Canadian developer Creative Bytes is here to scratch that itch. Combine the fantasy of 80s movies like The Dark Crystal, Labyrinth and The Neverending Story with SNES platforming titles like Aero the Acrobat. The result is a side-scrolling sleeper known as Embers of Mirrim.

Return of the Fusion Dance

Embers of Mirrim has an unspoken narrative, but you know what is going on unlike Limbo or Inside. The protagonist is part of a species of quadrupeds that have developed into two opposing races over time. The light colored creatures can glide; the darker have superior jumping ability. Big surprise, they do not get along and live separately. All that keeps them from killing one another is their elder: a much larger breed that shares the characteristics of both races. The elder warns them of an impending invasion that threatens to destroy them all.

As the Elder's prediction comes to pass, the leaders of each group, Mir (light) and Rim (dark) rush to the Elder's palace. When the Elder is nowhere to be found, the two prepare to fight one another, but a mysterious power fuses them. Now a single being called Mirrim, they must find the source the energy that corrupts their land.

The plot for Embers of Mirrim is paper thin and it has been done many times before. However, that is not a bad thing because a game like this does not need much in terms of story. If you happen to own any early console games and still have the instruction manual, read it for a good laugh. Some of these games had these elaborate back stories for a game where you would run and jump for a few repeated levels. Creative Bytes made the wise decision to let the game tell the story through its visuals. This manages to make the story much more satisfying for the player.

Hold On To Your Sticks! 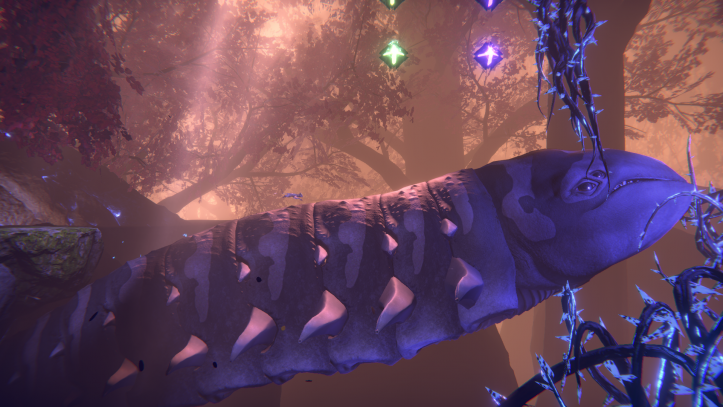 During its development, Embers of Mirrim caught my eye with its gameplay. However, the gameplay videos that Creative Bytes have put out cannot prepare you for what lies ahead. I mentioned that the protagonist Mirrim is comprised of two separate beings, Mir and Rim. Each one of them has the ability to convert into an energy form called an Ember. Mirrim retains all of the abilities of its respective parts so you now control two Embers. The developers wanted to create a game that you would remember so ninety-eight percent of the game requires you to control both Embers at once.

At first, this seems relatively simple; you move the Embers (one green; one purple) to their color designated areas. The rifts boost your limited ember power and the nets extend it infinitely as long as you remain in them. The challenge lie in the puzzles. There are progression puzzles that will take your eyes to the edge of the screen – this might be the one time you wish you had a smaller screen TV. The glyph puzzles will often do the same but these are only for completionists and are not required to finish the game.

Should you brave all the progression puzzles, you will be treated to several challenging boss battles. These battles test your hand-eye coordination and reflexes. Sometimes you have to run away from a threat as with the above Whaleworm or you may be boxed in as with the first Flarefly Queen battle. In any of these cases, you must run, jump and split, all while finding a way to defeat your enemies and cleanse them of corruption.

The twin-analog controls in Embers of Mirrim are a welcome madness. They will honestly drive you crazy in certain parts of the game. That said, if you really like platformers, you will feel a geat amount of satisfaction when you get past these areas. Creative Bytes even suggests that you take a short break if a section becomes too frustrating. The most challenging part of the game might be finding and completing all twenty-eight glyphs as several are in hidden rooms. Unlike the areas where Mirrim's people are located, these rooms will not make the controller rumble or chime to indicate they are near. The glyphs will add replayability for the completionist and a serious challenge for the speed runner. 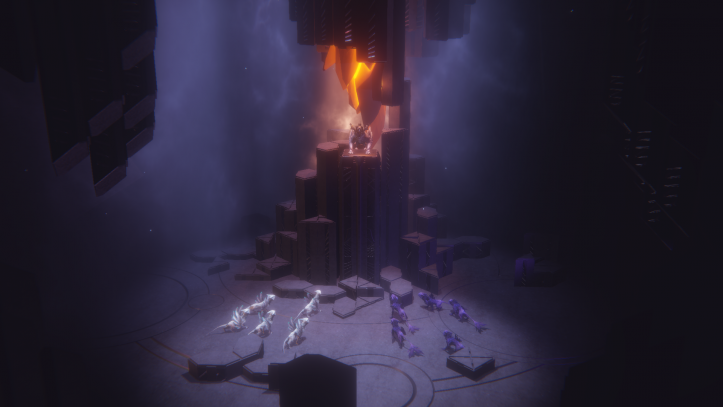 Creative Bytes took inspiration from fantasy films to make this game and it shows not only in the story, but the visuals as well. Embers of Mirrim is full of beautifully detailed backgrounds that will make you wish this was an open world title. The water effects are on par with much larger titles and the colors look like something out of James Cameron's Avatar. That is just where my appreciation of the game begins.

There were a lot of simple effects that were used to make this game look fantastic. Again, my gaming roots almost go all the way back to the very first arcade cabinet so I have seen a lot. The camera pans in and out a la Killer Instinct to let you take in the view as you race across the terrain. The 2.5-D boss battles are literally some of the most beautiful gaming scenes I have seen this year. Combine all of that with a color palette that is as easy on the eyes as it is stunning and you have a title that (at the very least) deserves art direction awards for 2017.

Embers of Mirrim – The Verdict 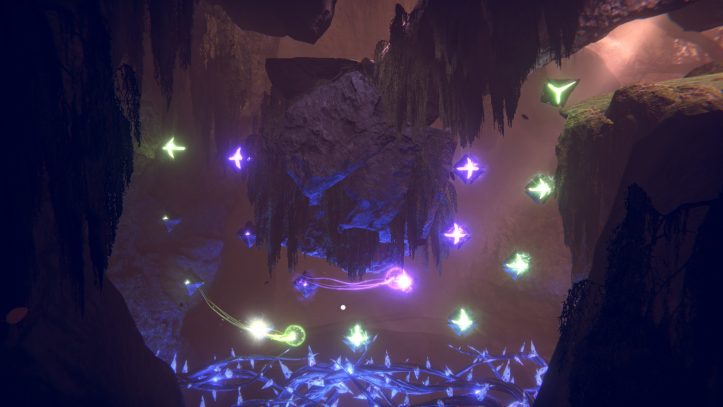 Embers of Mirrim is not a long game. You definitely can finish it in one sitting if you choose. It is the puzzles that might cause the need for a break and will have you coming back for more. The game will test both your problem-solving ability and your patience, but never to a controller-throwing degree. The game is well-paced so that you can play it the way you want to. The learning curve is such that you will get satisfaction the first time through and more so on subsequent plays as you get better. Achievement/trophy hunters have a solid task ahead of them that is neither easy nor too difficult. The inclusion of two endings depending upon whether you find all of Mirrim's people also serves to further the game's value.

Embers of Mirrim is platformfing paradise; it will take you through hell but reward you for the journey. 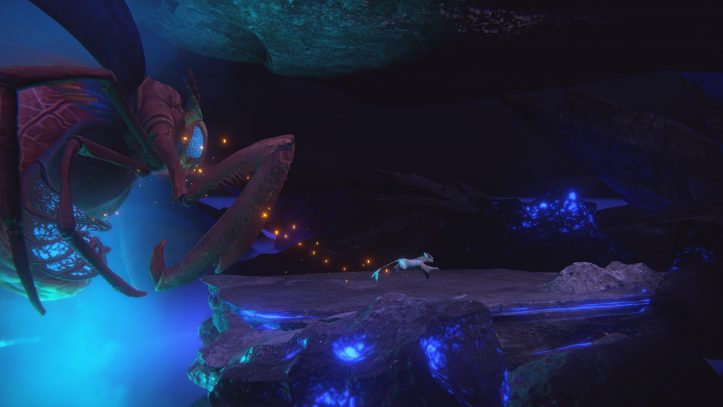 Slick's Score: 4 – I enjoyed this game and definitely see the influence of movies I enjoyed as a child. I think Creative Bytes should consider a sequel.
Slick's (reviewer) Score: 4 – Technically sound with a cliché story; gameplay is something that needs to be experienced.
Genre Score: 4 – While it will not unseat Mario 64, Embers of Mirrim carves its own spot amongst top platforming titles.