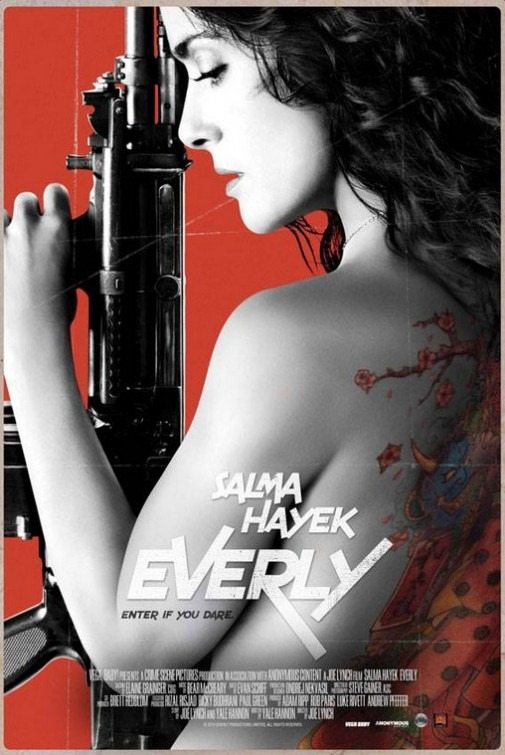 There are different kinds of courage. There are those that stand up for others because no one else will. There are those that have something or someone to protect. Then there is the kind of courage that comes from instinct. When an animal is backed into a corner and has nowhere left to go, adrenalin turns fear into rage. Sometimes the lines get blurred and it is hard to tell what drives us to do what we do. Is it courage or is it merely animal instinct? When everything is on the line, it might just be a combination of the two. Joe Lynch brings us into the world of Everly, a woman who has had everything taken from her long before the story begins. During this one night, the man who claimed ownership over her pushes her into that proverbial corner. No one, not even Everly, will expect what comes next.

FROM HELL’S HEART We first meet Everly in a bad place; unfortunately that place happens to be her own home. It is actually a pretty nice studio apartment if you ignore the blood and the growing number of bodies and holes in the walls. The reason that Everly finds herself in such a situation is that she owns nothing; everything that she has, including her life, are in the hands of a powerful Yakuza boss named Taiko. Several years ago she had been kidnapped and was to live as a prostitute. However, Taiko took a liking to her and made her his woman. Due to an unexpected encounter with police, she accepted an offer to testify against him in return for witness protection. Much of the police force are on Taiko’s payroll so the plan was unfortunately discovered. This leaves Everly in her apartment with a bunch of Taiko’s men. They plan to have fun with her, kill her and record it for Taiko to watch. Unable to bear the abuse anymore, Everly contemplates suicide until she thinks of her daughter. Needing to protect the last things she holds dear, Everly finds herself at the point of no return. This is where the story begins and to believe what takes place you have to see it for yourself.

THAT’S A LOT OF DEAD WHORES I was thrown for a loop when I watched Everly. I want to applaud whoever put the trailers together because they really made it seem as though the film had a lighter tone. Going into this with that impression, I was in for quite a surprise. There are moments that will make you laugh or just stare in disbelief at how stupid some of the characters are. Just when you think the movie is going to have that grindhouse vibe, Togo Igawa walks in the door. His character is simply called The Sadist. Even before he comes in, you can feel the serious vibe when Everly converses with her mother (Laura Cepeda). It is just that when this guy comes in the door it is like you can hear the record skip and fun time is over. That said, there is not a huge amount of dialogue in Everly, aside from the conversations  between Everly and Taiko and the one she has with her mother. Much of the acting in this film is physical, especially from Hayek. Her eyes and facial expression are more telling than her words because a person in this situation is not likely to have all that much to say. Amidst all the depravity in the film we have six-year old Aisha Ayamah, who plays Everly’s daughter Maisey. The innocence of the character makes you root for Everly that much more. From the “what’s in the box?” scene to where she reveals to Everly that she knows who she is, one of the most powerful performances comes from this child. Some might be annoyed with her because she never does what adults tell her to, but that is how children are. I think that most will fall in love with her, especially in the final scene. Salma Hayek was definitely a believable badass in this film, despite pulling off some unbelievable moves.

HOW FITTING The whole reason that Everly has to go through this gauntlet of attacks has to do with the premise of loyalty and how it is valued within the Yakuza. Taiko feels betrayed by her actions and has to make an example out of her to ensure there is no future betrayal. This is the setup for a lot of gunplay and gore. The visual effects used definitely had a more Japanese feel from the elevator blood spray to the more graphic scenes at the end. There is no bullet time or wire work in play here; the effects are much more traditional. You could tell that a lot of blood packs, make-up and Alka-Seltzer were used to give this film its look. Everly has no 3-D and there is only one instance of CGI, but the more traditional visual effects used are sure to please most action fans.

HAPPY HOLIDAYS Everly is purposely made to disturb. From the very beginning when you realize the Yakuza are shooting a snuff film all the way through to the credits, this movie was made to (hopefully) make you uncomfortable with what is happening. Nothing hits that home better than the music. You would not know that the events are supposed to take place at Christmas if not for the present that Taiko sends Everly. It is really messed up to hear “God Rest Ye Merry Gentlemen” while the camera pans to show the entire sixth floor of the building littered with bodies. And who could forget the classic “Silent Night,” especially when the camera shows you a shock trooper hanging dead from the side of the building. This would definitely be that Christmas album that you would want to pass on.

I have to say that I enjoyed Everly. The above trailer gave me a much different idea of what to expect from the film. I had said in my preview that I thought this would be a Grindhouse style of movie after watching the trailer. Instead of being ultraviolent with twisted humor mixed in, Everly is ultra-violence with just really twisted imagery. I cannot say that I am disappointed with the product and I do not think anyone looking for a decent action flick would be disappointed despite the fact that everything takes place in an apartment. I have read some pretty silly things online regarding opinion of Everly. People were mad that they did not get to see Salma Hayek naked. I can sort of understand that. She might be forty-eight but she looks fantastic. Even so, if that is what you came for, go watch Desperado. Others complain because they say the movie wasn’t realistic. No action movie is realistic because ninety-nine percent of civilian life in countries where you could sit and watch a film like the this don’t see this kind of thing happening. Movies are an escape and we need to see things that do not happen in everyday life. The bottom line is that whether you watch it at home or go to the theatre when it debuts in February, Everly is an enjoyable flick. Just make sure you aren’t eating when The Sadist enters the apartment.

You can purchase or rent Everly from iTunes now. Everly will be in theatres on Friday, February 27, 2015.