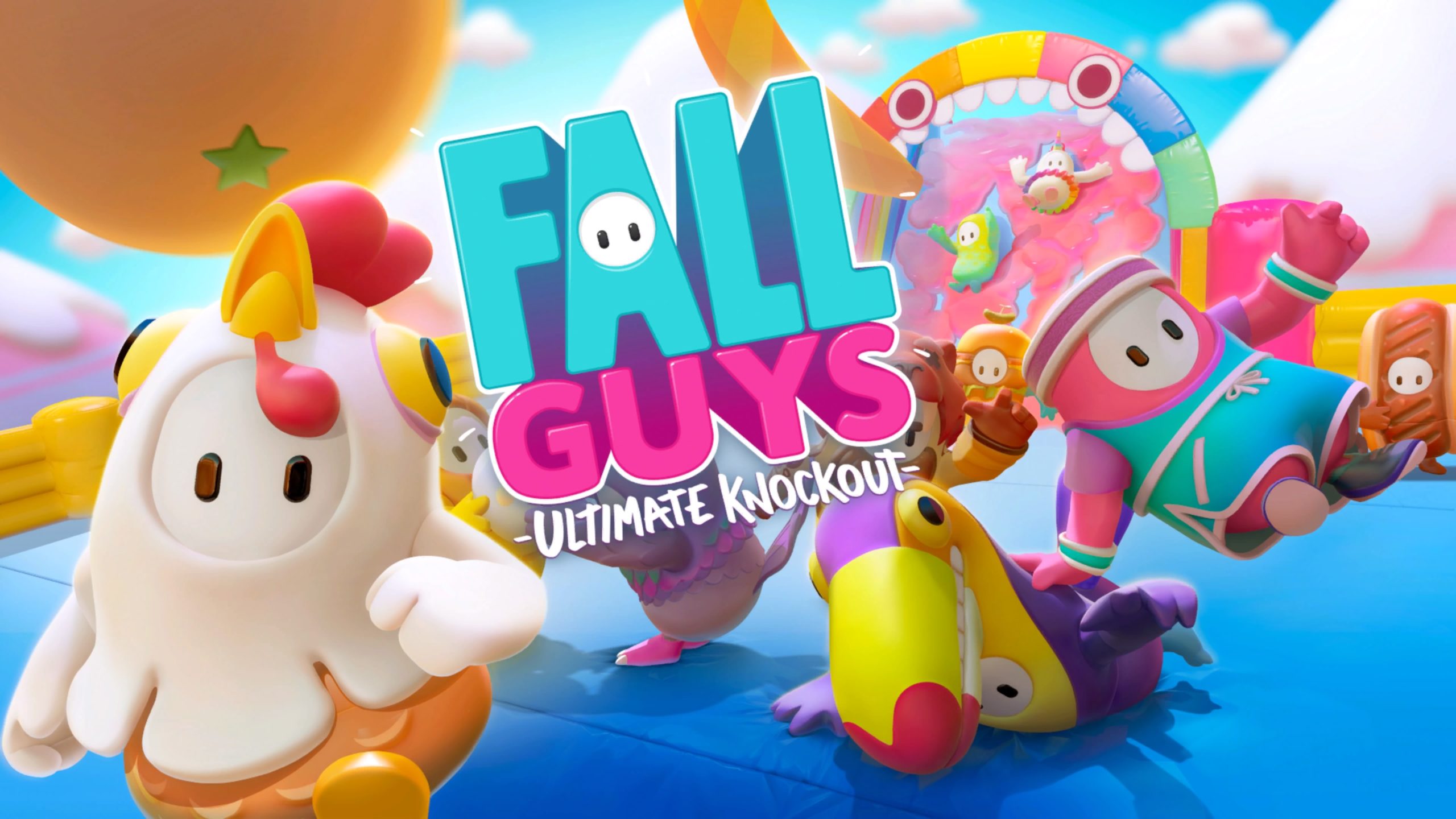 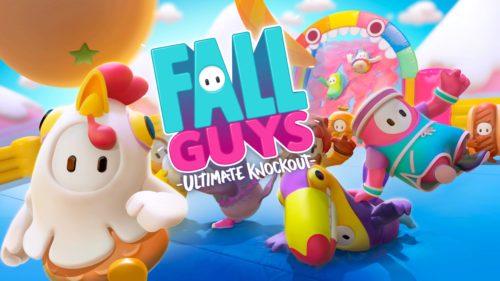 Fall Guys: Ultimate Knockout is a brand new IP from Devolver Digital and developer Mediatonic. If you have a PS4, it is nearly impossible you have not heard of it as it is one of the free games for August. That alone says that every PlayStation Plus subscriber should add it to its library. It is not too often that a new release comes out for free like this. The goal here is to break down the game and see if the people on Steam or anyone after August should pay for the game.

Fall Guys: Ultimate Knockout is described as a massively multiplayer party game. The premise is that you are a game show contestant competing against up to fifty-nine others. The goal is to be the last individual remaining during the final round. Think Ninja Warrior meets American Gladiators, minus the performance enhancers.

Mediatonic definitely took cues from Japanese game shows that eliminate players in spectacular fashion. Winning means gaining experience which unlocks gear, currency and fame for your character. You also get a certain amount of Kudos (the game currency) depending upon how far you make it. There is a huge difference in rewards between first and any other place. Slap on your disguise and cross your fingers; luck is a huge part of this game show!

On the Mediatonic website, the game description literally says “leave your dignity at the door.” I sometimes wonder why the game lets you even invite three others to jump into an episode with you. Yes, it is great to have your friends in the same match. At times it can even be advantageous. There are, however, no real friends in Fall Guys. Inadvertently or (more likely) intentionally, you will screw one or more players over.

Individual events are usually a race to the finish with a set amount of qualifying positions. Occasionally an event may involve memory or dangerous obstacles and/or terrain. Team events mostly require you to have the most points when the timer runs out. Bottom line is that you always want to see the following screen:

All players have equal abilities and there are no power-ups. You cannot pay to win here; everything relies on your ability and a healthy dose of luck. The reward system is completely cosmetic. The great thing about this is it makes Fall Guys accessible to newcomers. The game may only be a week old, but there are definite “veteran” players already. Fortunately, a day one player has just as much of a chance to win as they do. The one advantage is knowing how a stage works, but that does not guarantee advancement.

Not Breaking the Mold

Devolver Digital is known for prioritizing fun in their games. Fun does not require mind-numbing, cutting-edge graphics. Stripped down, the contestants in Fall Guys resemble a certain despicable group of characters. This is actually a pretty awesome design stressing the concept of a level playing field. The difference is your creativity in accessorizing your character. The simple graphical style and level design is vibrant and colorful. The music is whimsical, fast-paced and sounds like something from a goofy game show. The overall design here is a perfect example of where less is more.

Verdict: Will You Fall for Fall Guys?

If you are reading this before September 1, 2020 and have PlayStation Plus, just add this game to your library. There is no need for you to read any further. If you are a Steam gamer or if it is after September 1, this part is for you. Fall Guys: Ultimate knockout is fast-paced, mindless fun. It is even more so if you have your friends playing with you. There are, however, a few things you should consider before you spend your twenty bucks here.

This game launched on August 4, 2020. The main menu indicates that it is in its first “season” and that it lasts for another 54 days (as of 08-12-2020). As of now, the game is free to play and no one can pay to win. If you choose to get this game, do it while this situation persists. Take games like Fortnite and Grand Theft Auto Online, for example. I am not saying anything negative about either, but neither game is what it was at launch. Fortnite is a completely different game from its launch version. Get in while the getting is good.

A week after launch and there are already signs of toxicity in the community. While there is no apparent cheating (yet), there are trolls that join episodes merely to ruin your fun. Whether it be holding you at the finish line or giving the “This is Sparta” treatment, opponents can be ruthless.Sometimes in a team game, your own teammates will turn against you. If you rage easily or explosively, you may want to skip this game.

Microtransactions do exist in this game, but they (currently) give no advantage to players. You can buy cosmetic items and Kudos, but they are only worth bragging rights as of now. Should this remain the case, especially on PlayStation, then everything is fine. The game is currently free on PS4 so Devolver and Mediatonic should definitely make money somehow. As long as performance enhancements stay out of the game, they can add all the costumes and Kudos packs they like.

The only complaint I can throw back at the makers of Fall Guys is the unstable server environment. This is an online-only title and sometimes during the drop-in load screen, you get a server error. It does seem that the developers are on top of it and these situations are becoming rarer. The community situation is one of the risks of any online game. There is a definite need for more match types and maybe an option to set personal episodes. I look forward to seeing what future seasons will bring and you can look to us here when that information surfaces. For now, this is a game for those that enjoy the Mario Party format and a must-have for PS4 owners this month. 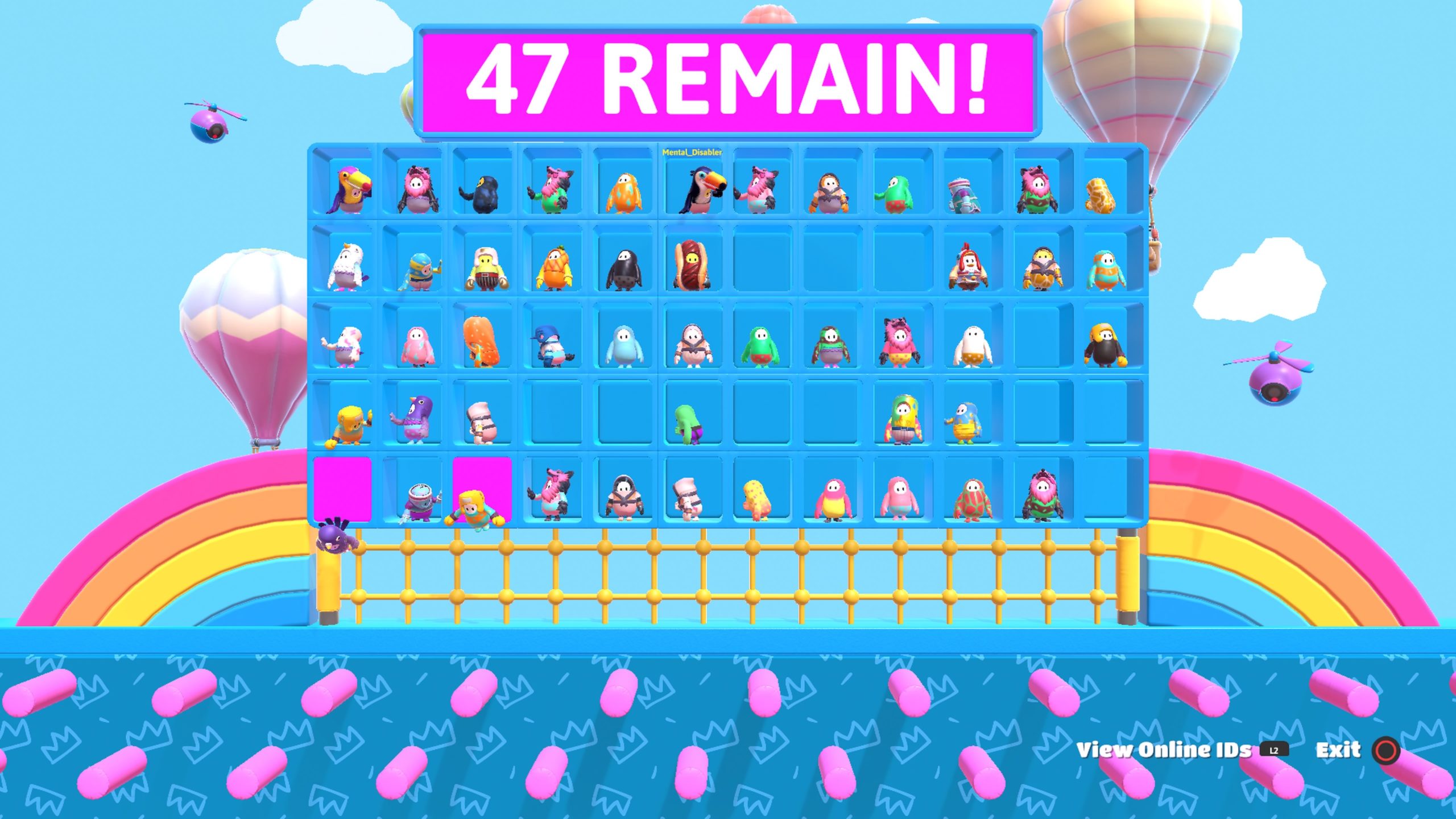 Fall Guys: Ultimate Knockout
Fall Guys: Ultimate Knockout is a fun party game for all ages. You can enjoy it solo or with up to three friends. Just beware of the trolls.
Kudos
Healthy Player Base (online-only game)
No pay-to-win structure
Goofy fun with friends
Eliminated!
Quickly begins to feel like a grind
Instances of server instability
Community becoming increasingly toxic
Lack of variety
3
QUALIFIED!