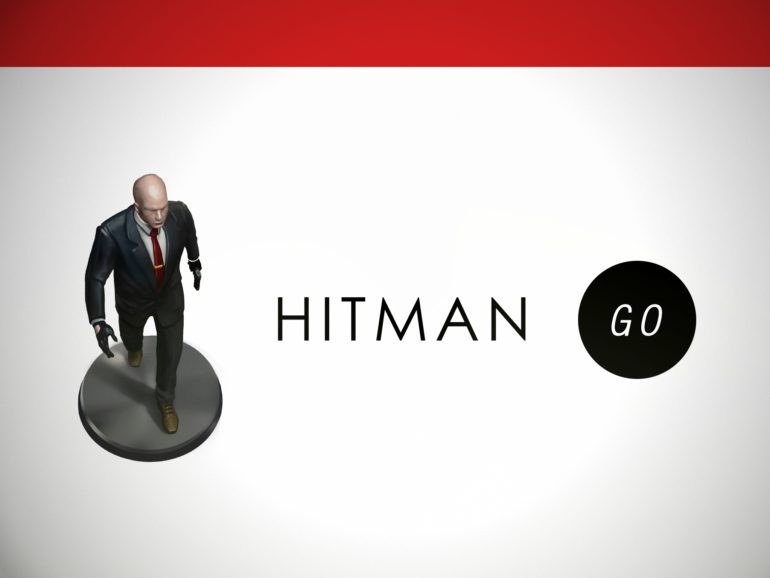 Hitman GO launched on mobile platforms back in 2014. It received very positive reviews and was downloaded heavily as it is one of those games you would literally find yourself playing anywhere. Whether you are in the office, on the train, waiting on line at the supermarket or squatting in the bathroom, Agent 47 could be there with you. With the upcoming release of a brand new Hitman game on consoles and PC, Square Enix decided to try out the game on PS4, PSVita and PC this week. Hitman GO: Definitive Edition for consoles has everything the original release did with the exception of microtransactions. It's time to pick it apart and see if a home release was warranted.

SILENCE IS GOLDEN Agent 47 operates in silence so a lack of information about him is not out of the ordinary. In truth, Hitman GO: has no story. You accomplish your mission and move on. I have come to look at the game in one of two ways: either this is how Agent 47 plans out his missions before carrying them out or the game is a replay of how he did them. Two of the later levels are based upon previous games so I would think that my latter idea holds more weight. That said, the “story” is a recap of missions that Agent 47 has accomplished. Let's make things more interesting and say that it is a training program for new potential agents. They have to be able to clear his previous missions and meet certain conditions to qualify. Since I am making things up I will stop right here.

SHOOTS AND LADDERS What immediately stood out to me about this game was the board game design. The second I got my hands on it, I was hooked. I found Hitman GO to be like a mix of Echochrome, the board game Sorry! and chess. The crazy part is that even though you are just pushing a token across a board, you still do everything that Agent 47 would do in a full-fledged Hitman game. There are even two special levels, one based upon Hitman: Blood Money and the other based upon Hitman 2: Silent Assassin. Every level is a puzzle in and of itself because of the placement of various guards between you and your goal. Each level also has three specific objectives added. You need to accomplish these to rack up enough points to unlock later levels. Accomplishing all of the tasks is where the strategy comes in. If someone were to just watch you play without understanding your objectives, they would think you were insane with all the back and forth movement. Agent 47 is not without his tools and his tricks, of course. From the beginning there are objects you can throw to distract guards and make them leave their posts or start a different patrol route. You can hide in potted plants or sometimes take on the guise of one or more type of guard to slip past them. When all else fails, Agent 47 has firearms he can locate to remove guards from the board “more efficiently.”The controls are simple as all you use are either the D-pad or analog along with X to confirm or circle to go back. you may also use the touchpad if you want the feel of the original mobile game. The minimalist design that Hitman GO utilizes proves that the “K.I.S.S.” technique works.

MILTON-BRADLEY, EAT YOUR HEART OUT! Square Enix Montreal must employ evil geniuses plotting to take over the world. Anyone that is capable of so completely grabbing the attention of the masses with something so simple is scheming something. Everything about the game makes it look like it is a board game and not a video game. On the chapter select screen, you see a bunch of boxes that look like different editions of a Hitman GO board game. When you enter a chapter, there is a giant diorama of the area you are infiltrating. Finally, as you enter a level, you see a smaller area, each of which looks like its own individual board game. And these are not the cheap dollar store versions, these are the deluxe types you would get from Barnes & Noble. Each level has a wooden paneled border and a nameplate telling you what level you are on. Once the level starts you are reminded in stunning detail that this is in fact a video game. Fantastic lighting effects let you know what time of day Agent 47 is operating. Even though every level is a small board, ambient sounds change depending upon where you are. You'll hear dog sand crickets if you are outside, but step into a building and that noise instantly disappears. If there is an event, you will hear the chatter of party guests while you will only hear the echo of such if you step out onto a balcony. There are triple A games that do not pay this much attention to sound design or detail. The loop of Schubert‘s “Ave Maria” on assassination levels is hauntingly beautiful and the standard music that slowly builds up to a Schubert level fits the game so well. Hitman GO is one of those games that is an experience and I am glad that I was able to behold it.

Hitman GO: Definitive Edition came out three days ago on the PlayStation Network and I can safely say that it is already one of the best games on the service. I am kicking myself that I never tried this game when it was just a mobile release, but then again, you cannot get this type of experience from a home theater and large screen on a cel phone or tablet. Even if you stink at the puzzles (which I will admit to at times) just look at the above picture for a moment. If you are thinking that is promotional art for the game, you are wrong. You are looking at a screenshot of an actual level. I am already thinking to myself “I can go there but then the guard. . .” I know that Square Enix released the game as part of the hype machine for the new Hitman game coming in March, but I am so glad that they did. I do not game very much on my phone, primarily because it is older and I am trying to wait for 5G phones to hit before I upgrade. While I know the mobile gaming market continues to grow, there are still a lot of us who play our games (primarily) at home unless we have a dedicated portable. The game definitely has its place on the mobile market because it is one of those games you are dying to take with you and show off to friends/classmates/co-workers. Still, the sights and sounds belong on a high-definition home theatre or quality gaming PC with a large monitor. If you complete all of the objectives on all of the missions, you are easily getting a solid ten hours out of the game. If you picked it up on PS4 then it is a cross-buy for PS Vita so you are able to double your fun. For $6.39 (until March 1, $7.99 after) you would be crazy not to pick up this game. The only people that should stay away from this game are those who hate puzzles due to their inability to think creatively. For the rest of us, Hitman GO: Definitive Edition is here for our enjoyment.