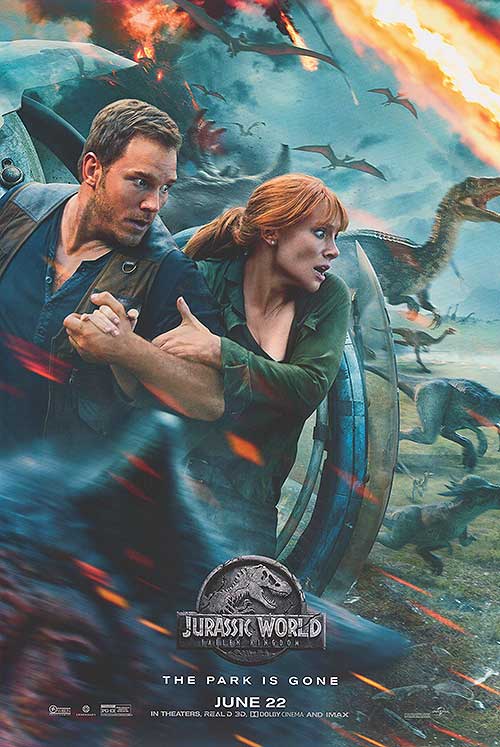 Watch at your own risk – this trailer gives a LOT of the movie away.

When the first trailer for Jurassic World: Fallen Kingdom debuted, I found myself confused and disinterested. Isla Nublar is (pun intended) going the way of the dinosaur. Claire, Owen and story newcomer Franklin are trying to outrun both falling magma and a dinosaur stampede. Then we get another trailer where Owen is trying to save a little girl (Maisie) from an unknown new predator (Indoraptor). I found myself more confused as to how these scenes connected. Regardless, it's dinosaurs so here I find myself at the theater. Time to find out if the Jurassic World franchise is worth saving.

The End of the Beginning

The plot behind Jurassic Park: Fallen Kingdom is simple: save the dinosaurs. Isla Nublar is destroying itself via volcanic activity. Benjamin Lockwood, former partner of the late John Hammond, wishes to save them. Too ill to head the project, his proxy Eli Mills hires Claire Dearing and Owen Grady to find and save Blue. As with every Jurassic Park movie, things go south and we learn lava is scarier than dinosaurs.

If that were the entire story, this would be the most boring dinosaur film ever. Fortunately, the opening scene lets us know that a much darker game is afoot. We are given a glimpse of the main villain from Jurassic World as Ian Malcolm (Jeff Goldblum) narrates. He indirectly narrates the film by giving his deposition in a courtroom. In his professional opinion, dinosaurs should be allowed to go extinct once more. The true star of the series has always been the irony of never listening to Ian. If you fail to pay attention to everyone else in the movie, listen closely to his words. They always manage to come back and (pun intended) bite those who failed to pay heed.

Owen Grady: Master of All Clones

Chris Pratt reprises his role as “NOT Star-Lord” and by himself, he fails to impress. Thankfully, he had three leading ladies to help him. Breaking up Owen and Claire (Bryce Dallas Howard) made them much better characters in this film. The lack of flirty banter allowed them to focus on getting their jobs done. Their screen chemistry sold the concept that the two characters trust each other that much better. His interaction with Blue was pretty much a carbon copy of the last film. Fortunately, it was part of what made Grady look fearless and somewhat badass.

If you have not noticed by now, every “Jurassic” film has to have at least one child in it. They give the right balance of wonder and terror. Thankfully, the Mitchell brothers are not around to get anyone killed this time. Lockwood's granddaughter Maisie (Isabella Sermon) plays a much smarter plot device. She gravitates to Owen a little too easily, but that may actually be by design.

I am still trying to decide whether it is good or bad that the runaway performances came from CGI/animatronics. Yes, the T-Rex manages to show up at just the right time on at least two occasions. There was even a scene reminiscent of The Lost World with her. Regardless, the Stygimoloch, Indoraptor and Blue provide the biggest standout performances in the film. The combination of writing and visual effects created a villain instead of just a monster. This made the final act of the film that much more enjoyable. What was attempted with Indominus Rex was perfected with the Indoraptor and it needs to be seen… in IMAX.

Twenty-Five years ago, audiences were left in awe watching the original Jurassic Park. Regardless of age, seeing “real” dinosaurs on screen amazed everyone. People did not even care that it was pretty obvious the Triceratops was animatronic. A quarter of a century later, things are not so obvious. The Triceratops and her baby were (I believe) still animatronic, but so was the Indoraptor at times. You will be hard pressed to tell the difference because the effects have come that far.

I am trying hard not to give away too much, but the Indoraptor has to be discussed. The effects team always tries to create the most natural looking movements for the dinaosaurs. With Indominus Rex, it was still not a huge challenge because its form still resembled a dinosaur. The Indoraptor is something much different. It is like they threw Dick Dastardly, a Xenomorph, a Velociraptor and everything not nice into a pot. Just for bad measure, they had Professor Utonium (or Dr. Wu in this case) throw in Chemical X. You cannot even call her a monster because she was a legitimate villain both in how she moved and behaved.

On a final note, you know your visual effects are good when I almost forgot that an island exploded in Jurassic World: Fallen Kingdom. That event took a back seat to everything else you will experience in this movie.

Verdict: Does the ‘Fallen Kingdom' Rise to the Occasion?

This is the fifth movie in the Jurassic park series. By definition, we are long past jumping the shark (or Mosasaurus). When a character in your own film keeps telling you to stop, you have to wonder. Yet somehow, this film really worked for me. Jurassic Park opened the door to a world of wonder. It brought us back to our childhood and gave the children of the day something to stare at with stars in their eyes. The sequels were warnings about the danger of playing God and going where your parents have forbade. Finally, Jurassic World closed the door once and for all, proving that there are things beyond the control of man. It was literally the end of the story.

Jurassic World: Fallen Kingdom is like the beginning of a second volume. In approximately three years we will see where the story goes. I see the potential for an entirely new type of tale. The wonderment is over and it's time to wonder if you will see tomorrow in this story. Every film before it has people running for their lives but this is different. There is no “I can't wait to get back home” anymore.

Jurassic World: Fallen Kingdom managed to hit on several real world scientific, ethical and conservation issues. It did so without being preachy and entertained from start to finish. Aside from visual effects and possibly musical score it will not win any awards. Much like Dr. Wu, it took pieces from its predecessors and created something new and dangerous. I am very interested to see where the end (?) of this trilogy goes. Make sure that you have seen Jurassic World before you see this and stay after the credits.

Fallen Kingdom is better than the original Jurassic World but you only need to see it in IMAX 2D. The 3D was not awful, but many opportunities were wasted where it really could have stood out.