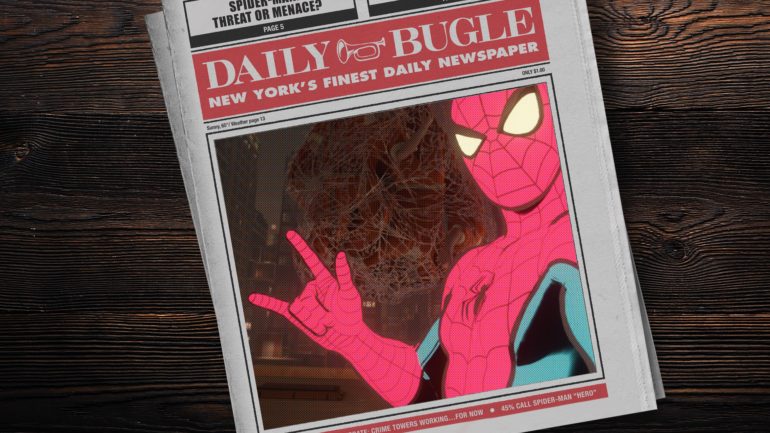 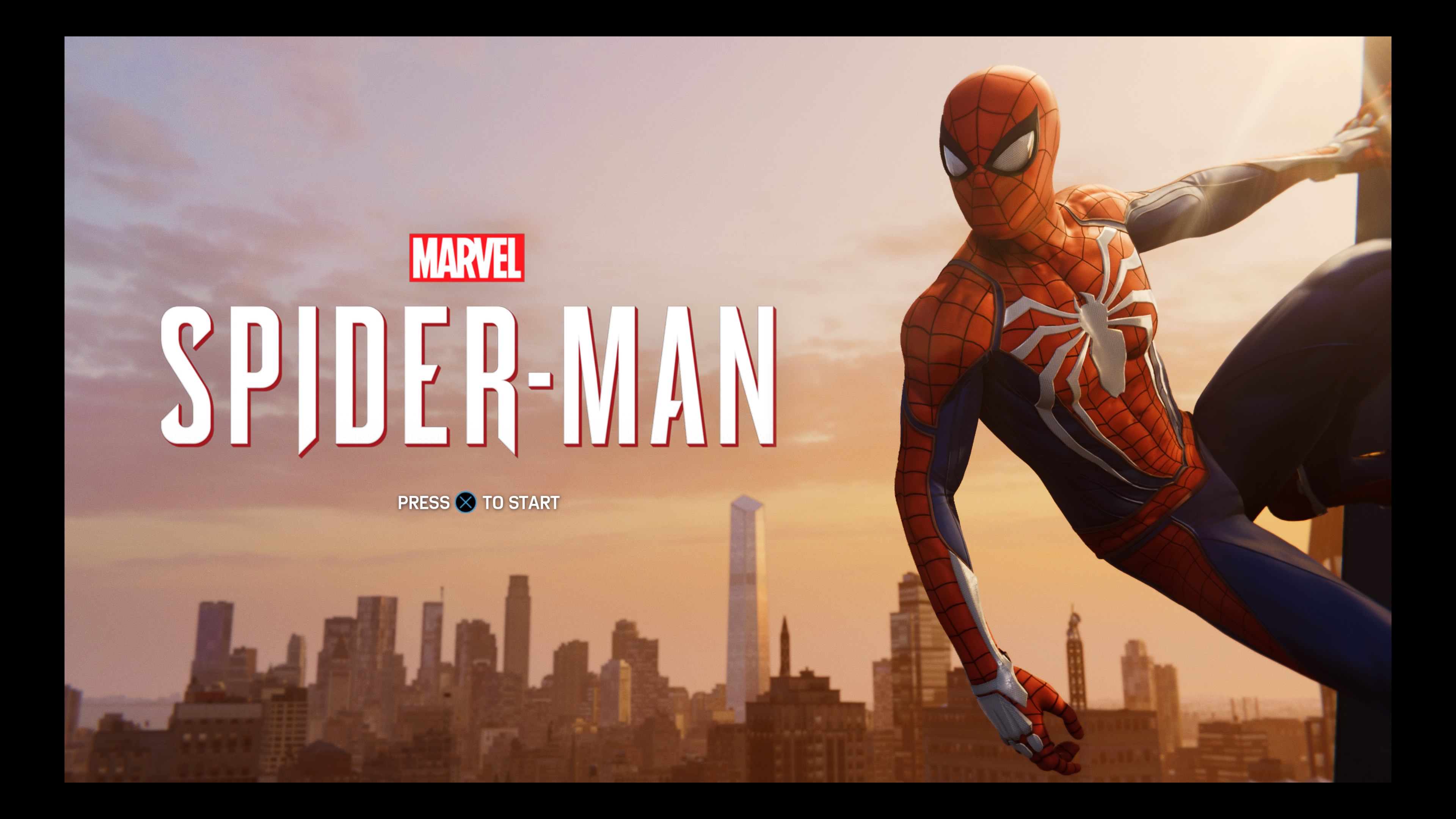 A Nerdy Kid from Queens

Aside from skin color, I had a very similar childhood to Peter Parker. Sadly, I cannot stick to walls or bench press in excess of ten tons. I admit to being a fanboy and I have bought every Spider-Man title since the PS2. Fortunately for you, I can still be objective. The last game was a movie tie-in and was not very good. For the first time since obtaining his merchandising rights, Sony is keeping the wall-crawler in-house. For his first 4K foray, they have enlisted the help of Insomniac Games, famous for the Resistance series. Marvel's Spider-Man caps Sony's 2018 first-party exclusive titles. Now we take an in-depth look and see if this is the best Spidey game to date. 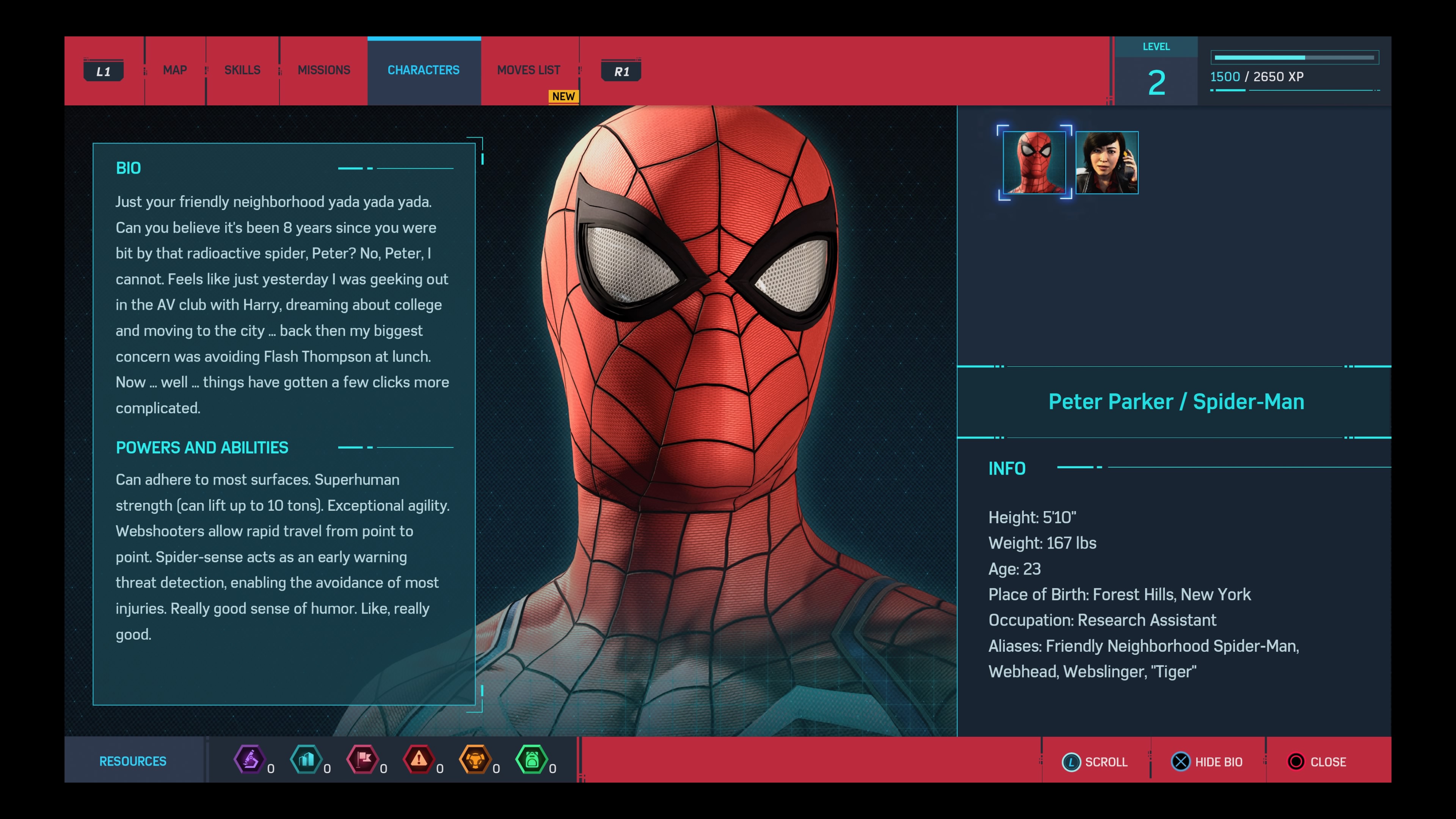 Lonely at the Top (of the Empire State Building)

It is STRONGLY RECOMMENDED that you read Spider-Man: Hostile Takeover before playing the game.

The game kicks off right where the book ends. The NYPD have enough evidence to move on Wilson Fisk and Spider-Man cannot stay away. His eight-year crusade against the Kingpin finally comes to a head. Fisk is incarcerated and warns that the city will beg to have him back. Crime explodes in Manhattan as gangs vie to take the top spot. Peter thought Fisk being taken down might allow him to hang up the webs. Unfortunately, street crime and supervillains make Spider-Man needed more than ever. 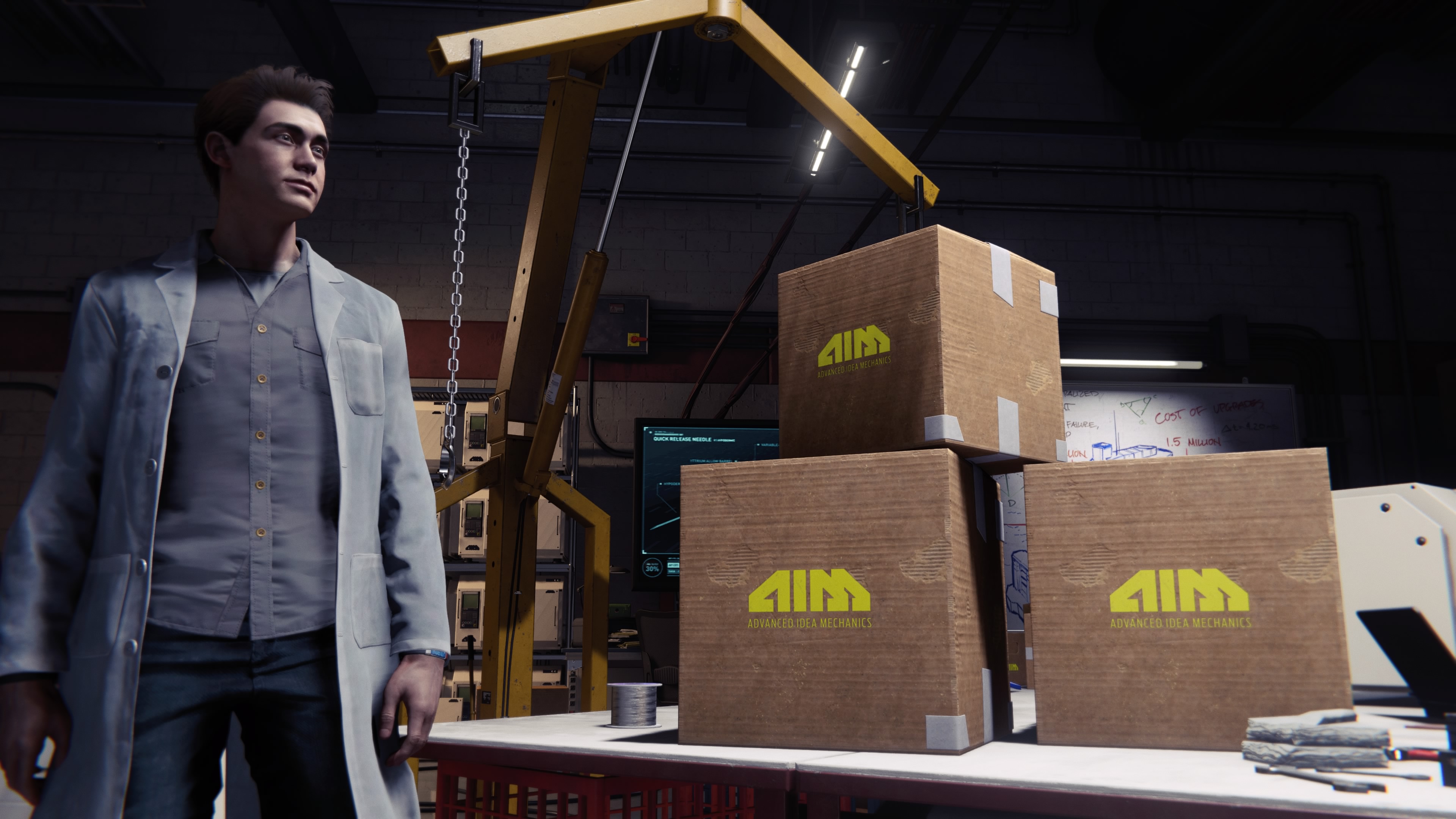 You will spend the most time as Spider-Man but the story really focuses on Peter. Even in suit, you will constantly hear him converse with Mary Jane Watson, his Aunt May and even Miles Morales. The writers made this the most personal game story as Peter often feels responsible for what happens in the game. While liberties are taken, there is really nothing new for Spider-Man fans here. Regardless, you will enjoy the story for the most part. 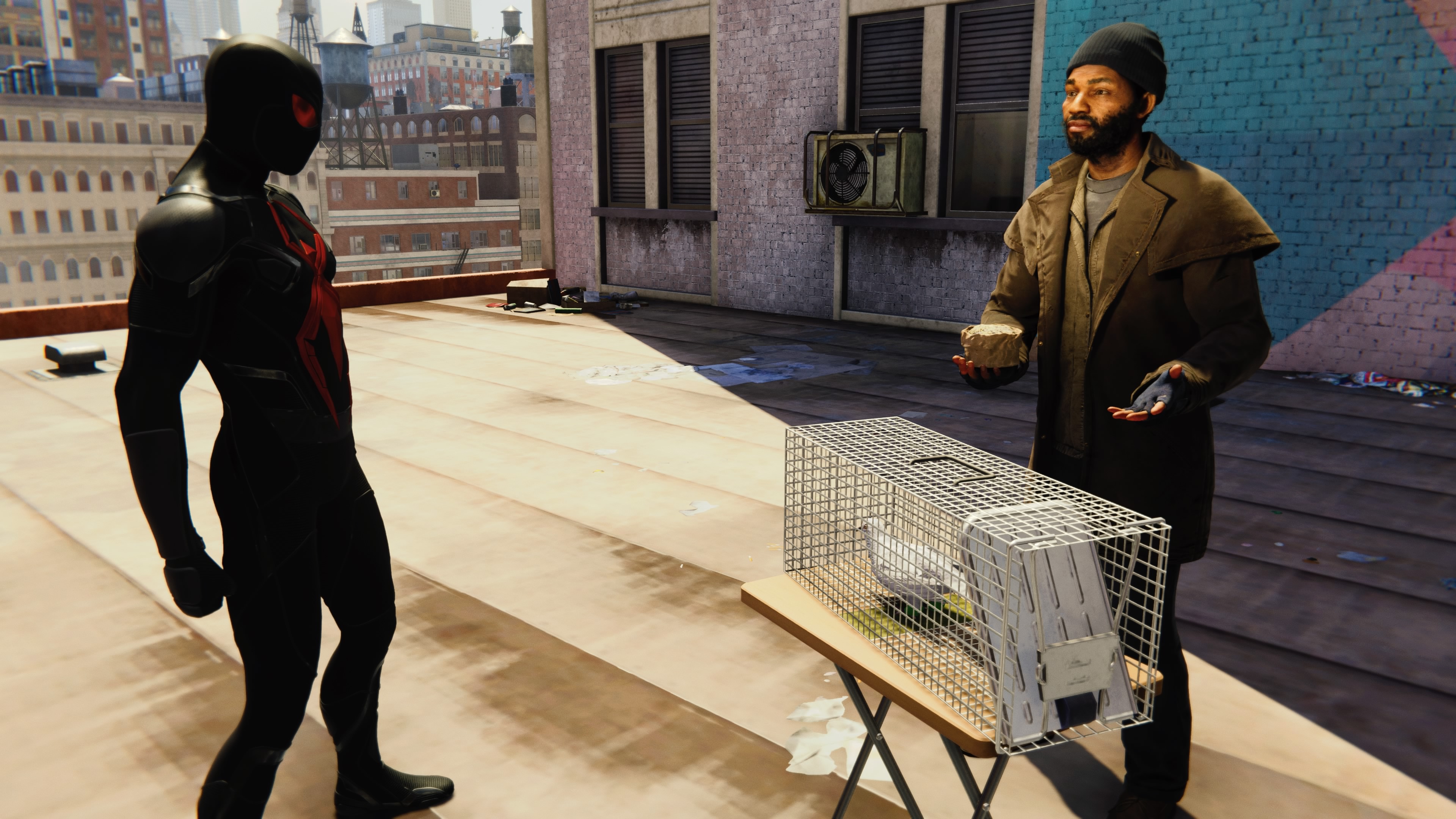 For the most part, the gameplay in Spider-Man is very good. Combat is basically punching and kicking, but you have a lot of toys to play with. With eight web gadgets, thirty-four skills and tons of combinations, you decide how to play. There are only two problems, the first of which is repetition. The are various groups of regular enemies but they all follow the same basic formats. Completing twenty random crimes in each Manhattan district gets old fast.

You Want Me to do WHAT?

The other issue has to do with mission types. There are a lot of fetch quests. While some get you cool Easter egg collectibles and new suits, other have you rescuing fish and pigeons. Of course, said missions are optional, but when you are going for a platinum trophy, this is 2018s balloon missions. 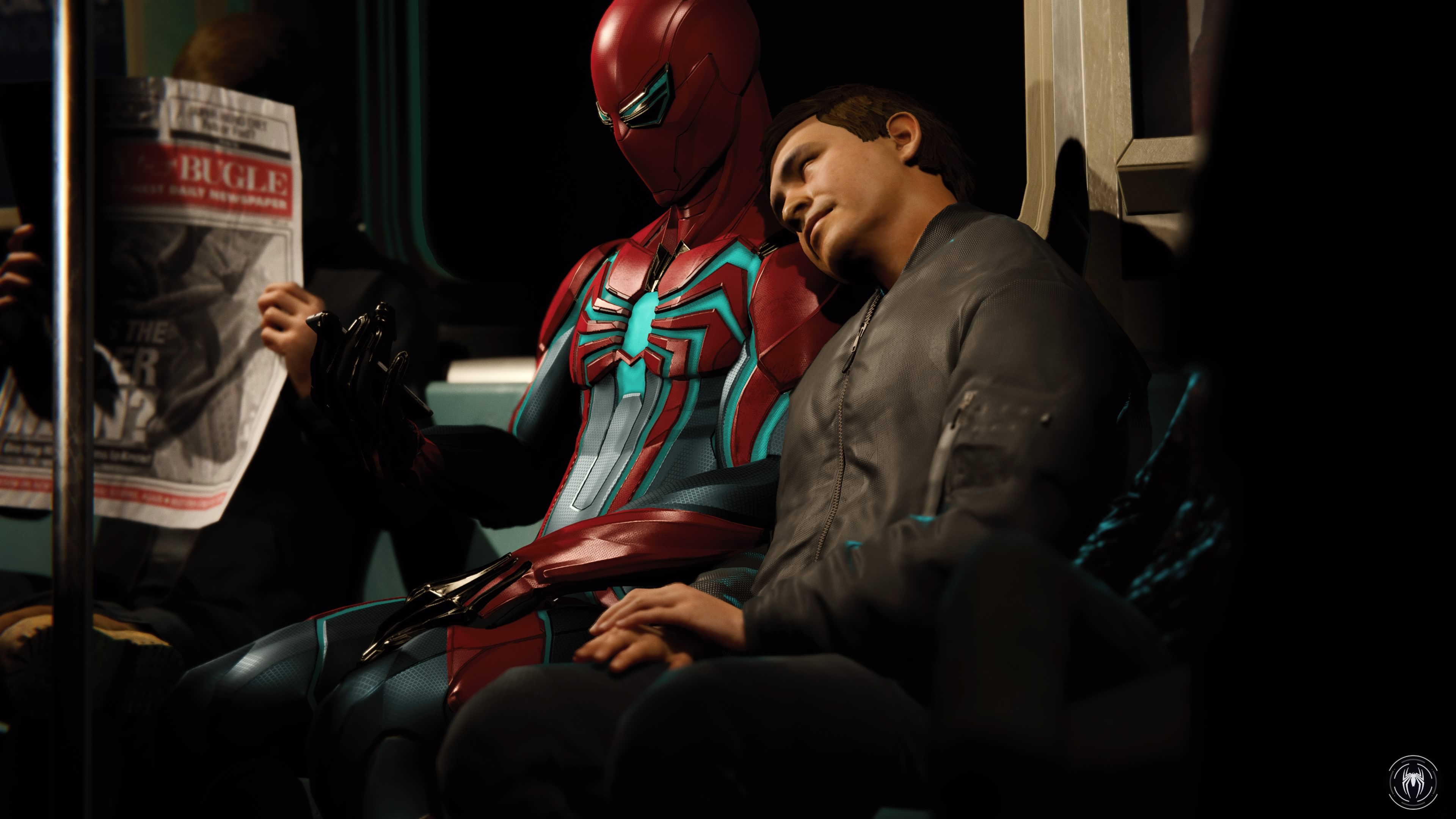 Can He Swing from a Thread?

The most important thing in any Spider-Man game is going to be the ability to swing. The PS2/Xbox Spider-Man 2 game has long been considered the gold standard for swinging through Manhattan. You have to build your abilities in this game, but by the end, you manage to top that experience. Aside from getting the associated trophy, you will probably never use the fast travel system. Swinging through the city is just way too much fun. 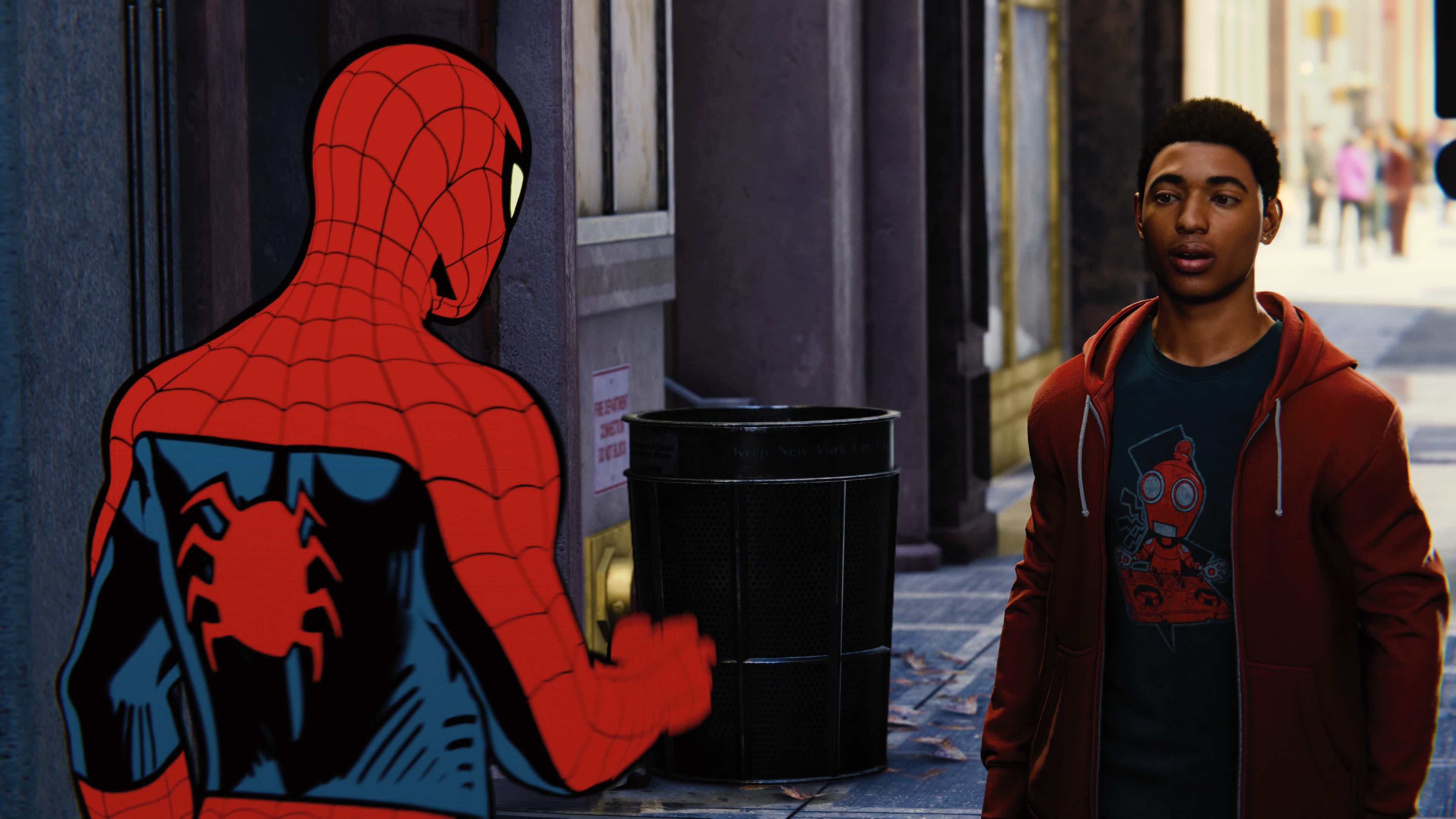 Part of doing what a spider can means moving about quietly. There are a lot of instances in the game where you have to perform stealth takedowns. Sadly, the only actual stealth sections of the game do not involve the webhead. There are times where the control switches to Mary Jane or Miles. These are easily the worst parts of the game because all you do is creep around. There are a few exceptions you should look forward to. Grand Central Station, Oscorp Tower and the Harlem shipyard are sections you will enjoy. I really hope the sequel and even DLC focus on stealth warfare that feature the main character(s). 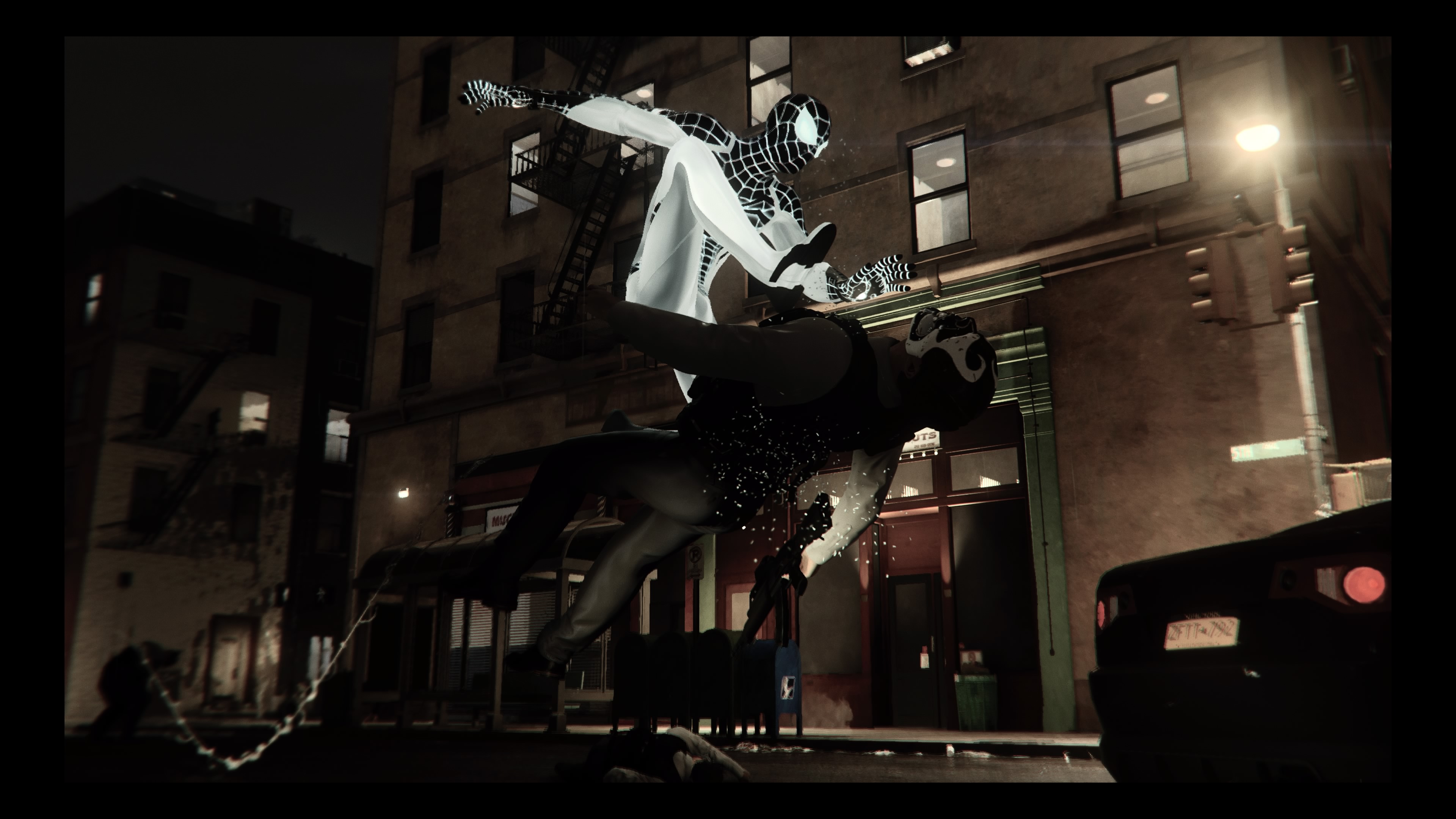 The visuals of this game are simply stunning. I made sure I had a PS4 PRO and a good 4KTV before Spider-Man launched. Even if you are playing on a standard PS4, you are in for a visual treat. Everything from the suits to the web effects and the fluid combat look great. My only personal beef is with skin texture. Compared to other games, it just looked weird to me. Combine my personal distaste for the look of Peter and Mary Jane in the game and I am glad he usually wears the mask. There was one special appearance I had no issue with the look of: 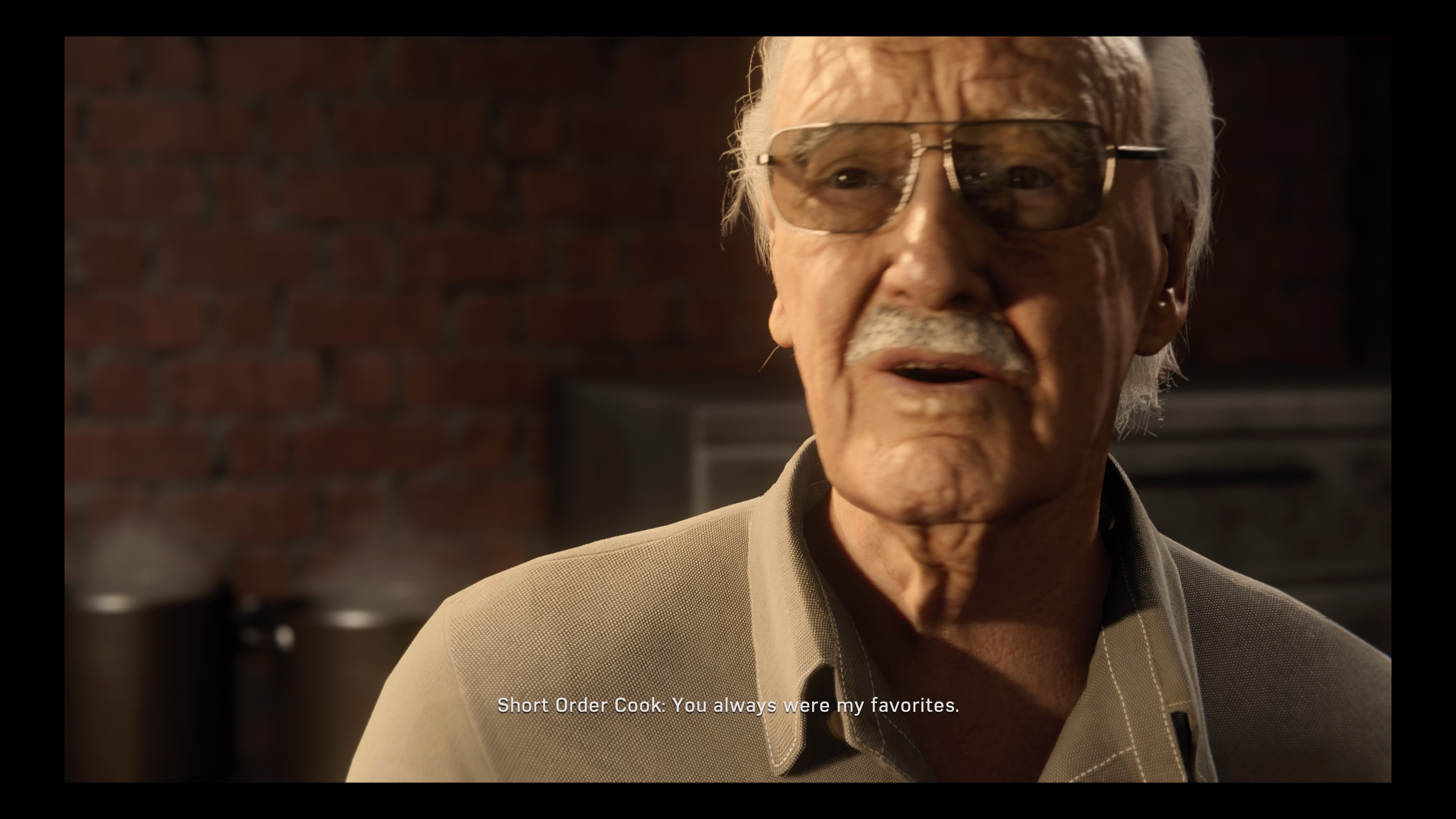 Formulate your own opion on character design but make sure you experience the visuals in this game.

Verdict: Does Marvel's Spider-Man Live Up to Responsibility?

It took me longer than normal to review Spider-Man for a few reasons. My opinions kept changing as I played through the game. There is a lot to like and not like, but it depends upon your perspective. If you have never played a Spider-Man game you absolutely need this game. Just know that there are better web-swinging games out there. 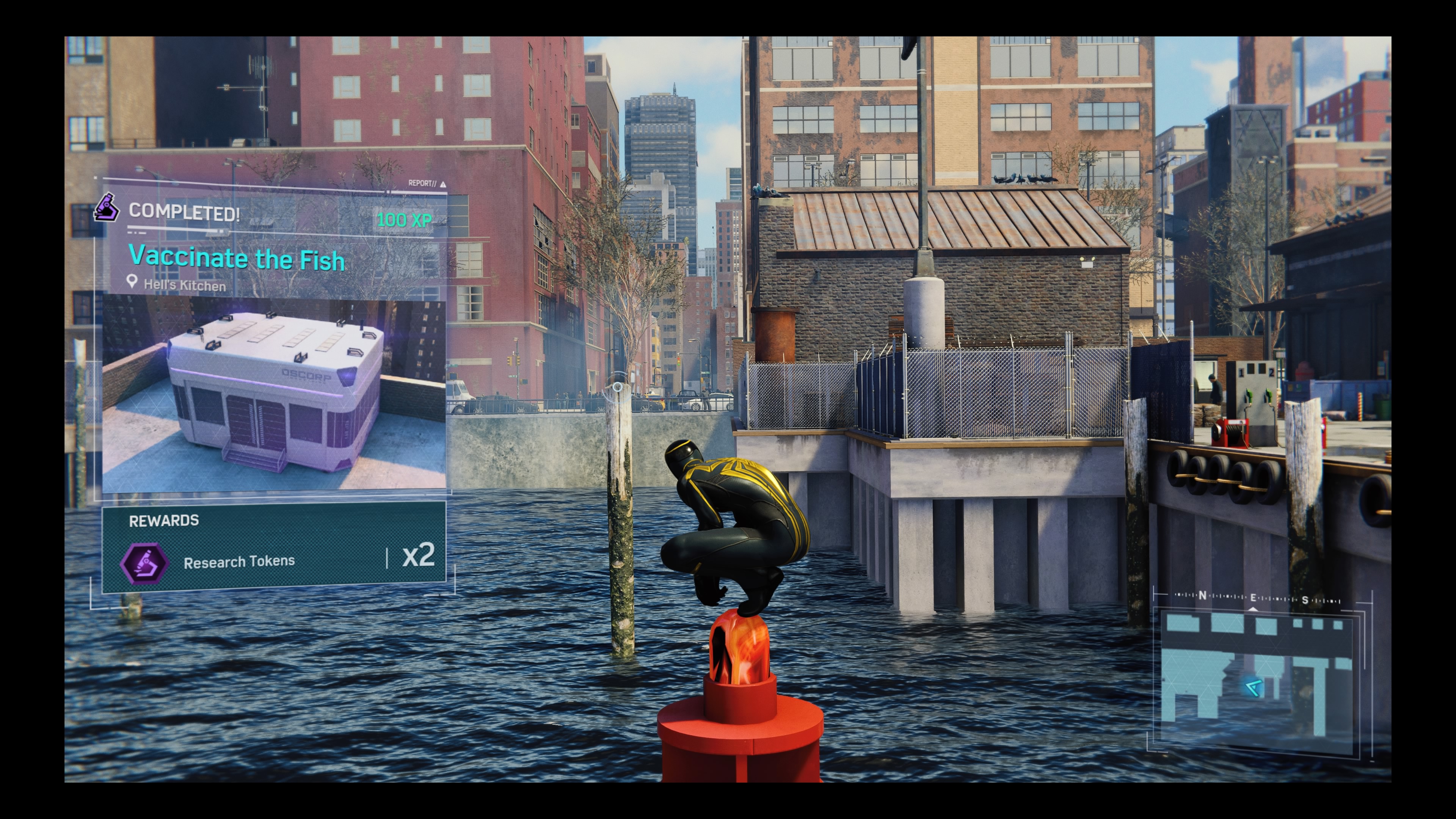 I am counting the book in this because while optional, it is part of the tale. In both the book and the game, we have a Spider-Man that is so unsure of himself, despite being eight years in the game. Insomniac stressed that this was not an origin story, but this made it feel that way constantly. Mary Jane was a major source of annoyance because of how she was written. They basically made her Lois Lane and she crucified Peter for wanting to keep her safe. Worst of all, this was supposed to be an original story, but they just mashed a bunch of existing storylines together. The narrative is definitely not the game's selling point. 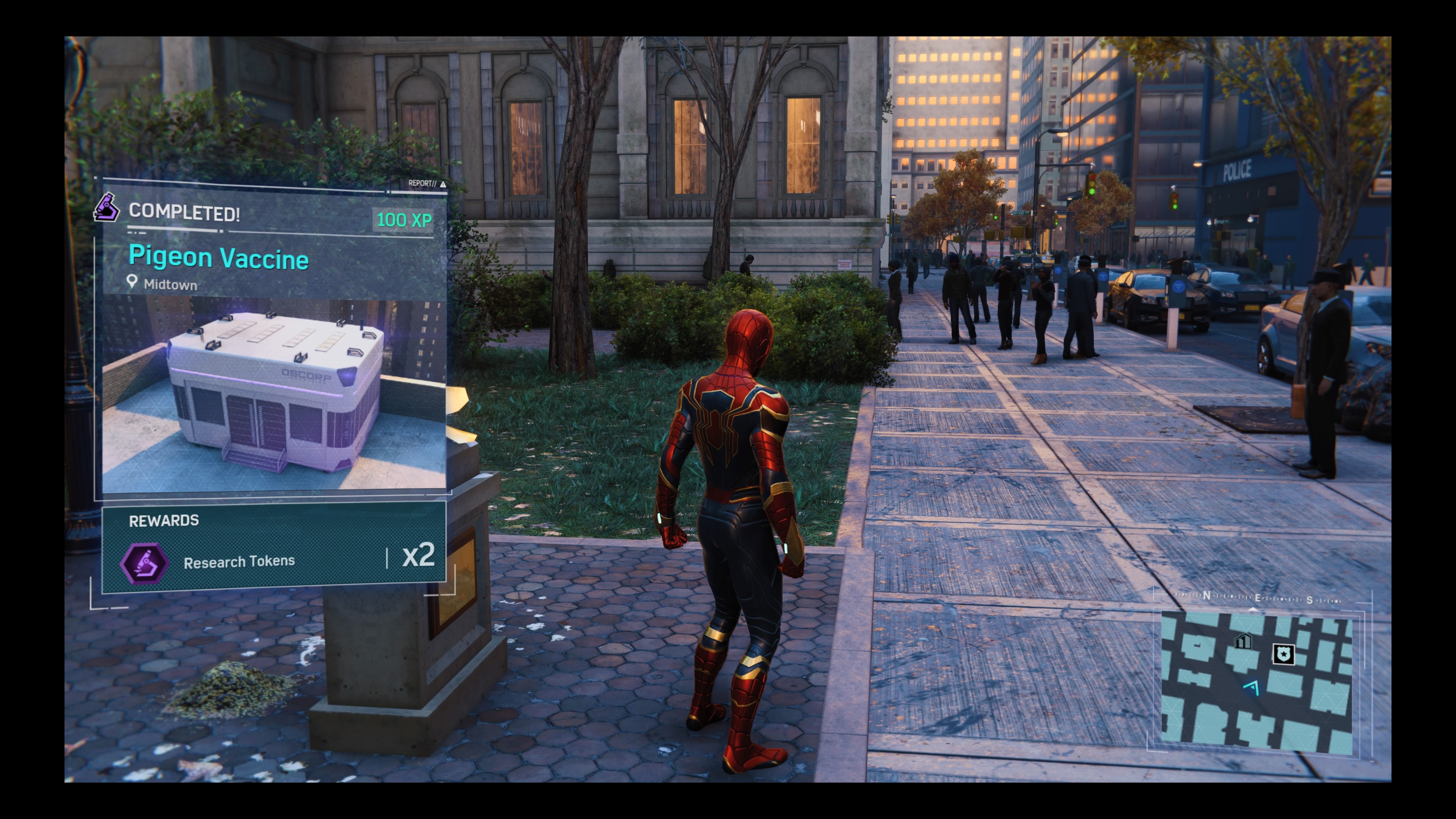 I will catch heat for this part, but I have to be truthful. The gameplay of Spider-Man was extremely enjoyable, but far from the best Spidey has seen. Insomniac took fighting and traversal moves from several older titles and created the best Spider they could. There is nothing wrong with that (hell, Rocksteady did it), but games like Web of Shadows did it better, especially combat. This is still the best Spider-Man gameplay on the PS4 (only two games at current) and you should experience it.

Hands down, these are some of the best visuals on the PS4 as of September 2018. That does not say that it is perfect. There is a lot of room for improvement. An open-world, sandbox-style game should have a dynamic day/night cycle. Also, I would love to know how Insomniac messed up the shape of Manhattan Island. The map is sizeable, but it is not a correct representation of Manhattan. It looks even more silly when there is a map in the game that has an accurate representation. An accurate Manhattan is always the first thing looked at in a Spider-Man game so I was shocked to see the oddly cut-off game space. One closing question is with regards to squirrels. There are a lot of squirrels in this game and I am wondering if it was intentional.

If one aspect of this game is stronger than the graphics, it is the music and sound design. The music feels like the best of every Spider-Man cartoon and movie formed Voltron. Turn up your sound when you play this game. Add in a voice cast full of personality and passion for a winning combination. Mary Jane may be a pain in the ass in the game, but Laura Bailey does a great job being one. If I had anything bad to say about the sound it would be that there are no squirrel voices! 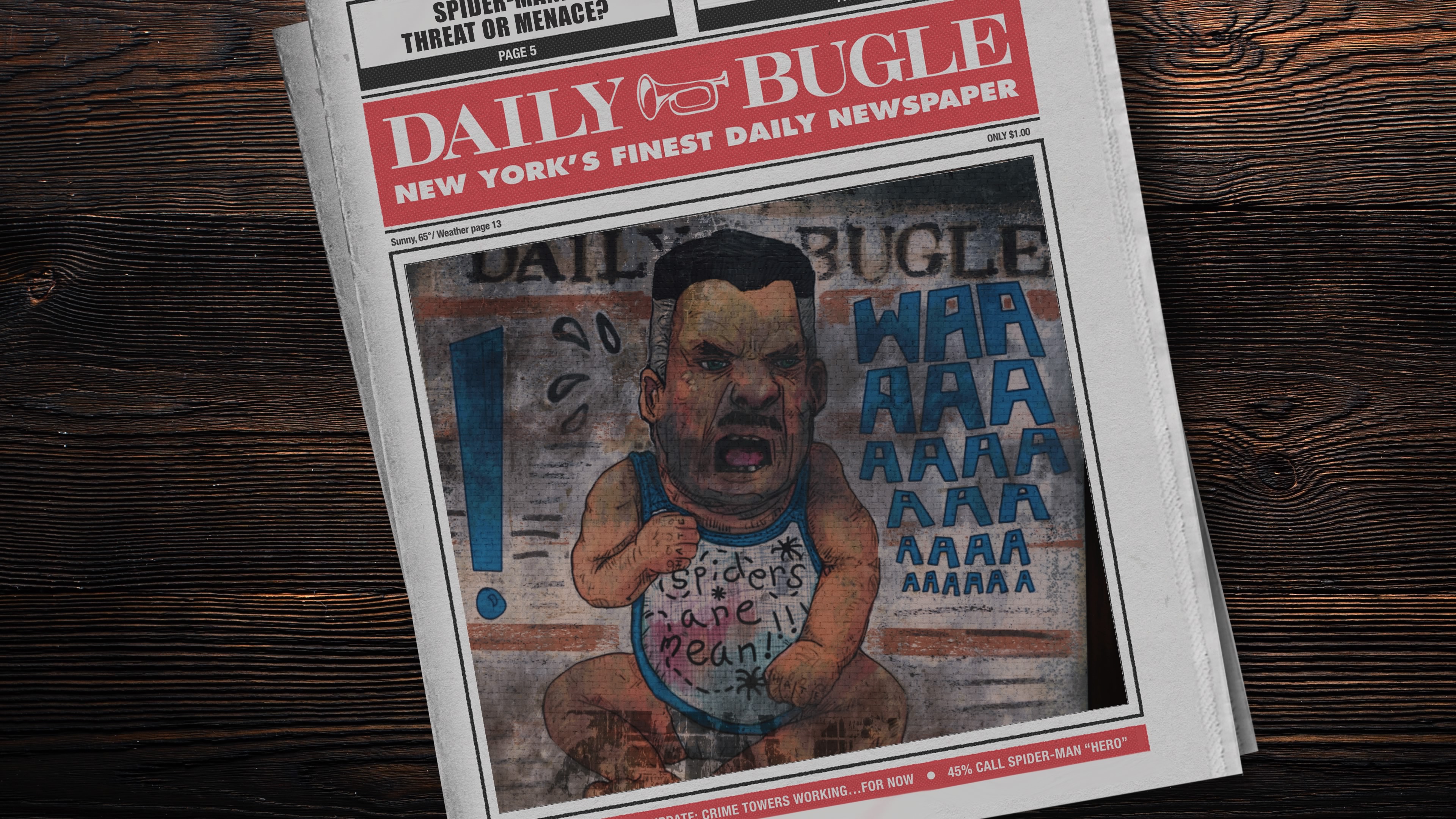 For all my crying about the drawbacks of this game, I really enjoyed it. If you own a PS4, you need to play it. If you are looking to get a PS4, try to get the PS4 PRO bundle. It includes the Deluxe edition of the game at no extra charge. Good or bad, getting an $80 game for free is worth the price of admission.