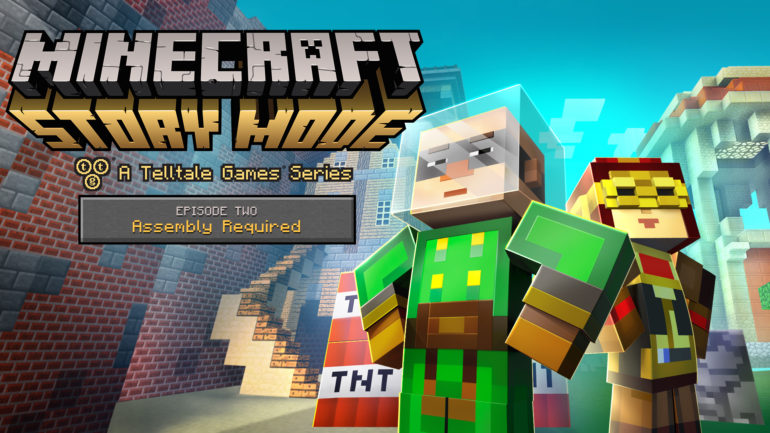 Minecraft: Story Mode literally came out of left field when Telltale Games announced it. The game loved worldwide that does not necessarily have any point for players where you could do pretty much anything you wanted was fine as it was. No one (that I know of) complained about this because Telltale has a stellar track record for storytelling and because it is not like this would change the original Minecraft game at all. It just became very interesting to see what Telltale would come up with. Now that “The Order of the Stone” is in the books, it looks like a solid adventure tale is brewing that both longtime fans of Minecraft and those new to the series could all enjoy. With that, we are back to take a look at the second episode, “Assembly Required.”

mild spoilers from Episode 1 ahead

WHEN LIGHT NEARS ITS ‘END' Jesse and friends found out that The Order of the Stone lied to the world, saying they had four members instead of five. They have no time to worry about why as Ivor, the excluded fifth, has unleashed the Wither Storm upon the world. This beast is much more dangerous than the Ender Dragon as it is consuming everything in its path. With both their friend Petra and the hero Gabriel missing, the group chooses to find the remaining members of the Order and hope they can stop this terror.  I really liked what Telltale did with this second episode of MineCraft: Story Mode because they are trying to promote replayability of the game. Who you chose (Axel or Olivia) at the end of episode one determines whether you play out chapter two or three of this episode. It is worth seeing both chapters and trophy/achievement hunters will have to. The only mildly rough part about that is that if you care about your choices, you would need to replay at least part of episode one and create a separate save. When I reviewed episode one, I said that the game was lighthearted and fun, despite the danger that Ivor created. There are still plenty of jokes at this point in the story but you can see things getting progressively darker. I expect the next two episodes to be much more dramatic before the laughs come back. There were several questions raised in this episode that may tie the story of The Order of the Stone to that of our new heroes. The Endermen pit and the encounter with Ivor are of particular interest. If players pay attention, they will also notice something really disturbing regarding Jesse and the Wither Storm. Things will definitely get worse before they get better and I cannot wait to see what happens next.

WATCH OUT FOR THAT GRIEF These are episodes of one complete game that we are playing here. The gameplay in this episode is not going to be any different from that of the last or the next. One thing that is worth noting is that I said last episode that Telltale seemed to have given you more time to react during QTEs than they have in some of their other game series. That is gone come episode two. While there do not appear to be any instant death moments, at least none that I encountered, you are expected to follow on screen commands immediately now. The only exception is during conversation. You still get plenty of time there. I can appreciate that Minecraft: Story Mode seems to be “holding your hand” less as the story proceeds and I will note if the third episode is more difficult at all.

DON'T MAKE EYE CONTACT Much like with the gameplay, the graphics are not going to change from one episode to the next. Until we get to the end of the story, I am only going to mention if anything particularly noteworthy happens in an episode regarding these two items.

Assembly Required is shorter in length than The Order of the Stone, but I still feel like more happened in this episode. The reason that it is shorter is because technically you only play five of the six chapters. The person you did not go along with does the other for you. Usually, the trophies are impossible to miss but with this setup it is an either or situation unless you play through twice. Knowing that trophy hunters would be sure to come back shows that Telltale wanted you to know both sides of the story, so to speak. What makes this progression of this game cool, even by normal Telltale standards, is that this is their first real mystery in a while. Usually their stories are main characters avoiding terrible situation A only to have to deal with terrible situation B and so on. MineCraft: Story Mode really feels like an old school Scooby-Doo mystery and I love the way it is coming together. Episode three is going to drop right before Thanksgiving and you had better believe that I will be enjoying that story along with my turkey.