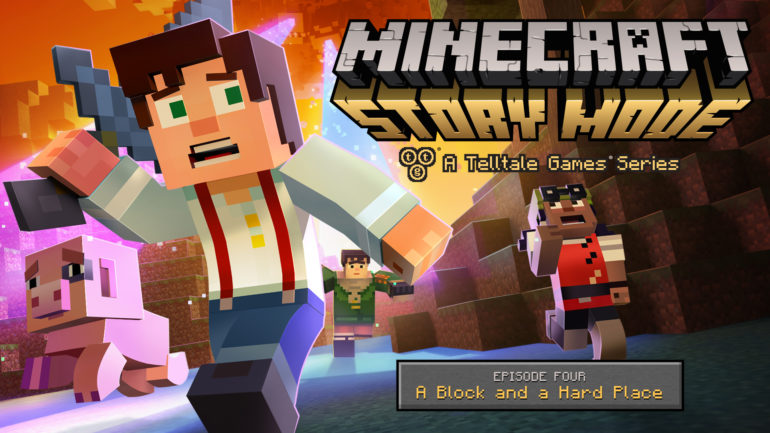 Minecraft: Story Mode has done a great job of creating a fun, yet dramatic mystery within the universe that Mojang created. There are plenty of questions that need to be answered, the least of which is why Ivor created a Wither in the first place. Forget the mysteries for now however because the world is being devoured! Last episode Jesse literally hit the Wither Storm with the F-bomb. All that did was make it take a nap and come back three times stronger. Yes, there are now three Wither Storms to deal with and our heroes are forced to resort to Plan B.

PLAN B ISN'T WORKING Gabriel is back and many of the people devoured by the Wither Storm are free. This is greatly due to Magnus making the ultimate sacrifice. There is no time to celebrate even the smallest victory because Petra looks like she could go at any moment and the three Wither Storms are on the rampage. There is literally nowhere to run. Then we find out from Ivor just why there is nowhere to run: the Wither Storm is following the amulet (called it)! Ivor is finally willing to help the group stop his creation to save his own skin, now that the Wither Storm has even started consuming Endermen. The final battle is about to start, but Jesse still does not know how to fight it. Internal strife amongst his friends is making the future look bleak.

This is both the best and worst episode in the story thus far for me. It is the best because it advertises the end of the Wither Storm and that makes people wonder what the heck is going to happen in the final episode. It is the worst because (many expletives deleted) Telltale did something horrible in this chapter! If you missed the R.A.G.E. Works live stream of episode 4, you will have to play through on your own to find out what I am referring to.

PAY ATTENTION This episode had some significant puzzles in it and you have to listen to the story if you do not want to stumble around like I did when I accidentally skipped the story that tells you how to do the first puzzle. When a puzzle has 120 possible solutions and the game does not give you any clues as to whether you are getting warmer, paying attention to the story is crucial. Aside from that, things are par for the course. Episode 4 has some crafting which I feel that every episode needs to have at least one instance in it. This installment has required the most active input from the player in the series. I can only hope that the final episode can top it.

Someone at Telltale Games needs to really feel my anger. Minecraft: Story Mode, episode 4 was (for me) the most emotional point in the story. I feel terrible saying this, but I was not terribly broken up about Magnus' death (might be Ellegaard for some). The story does not do enough to really invest you in those characters. I felt the need to avenge them, there was none of that “go Super Saiyan” type of anger. What happens in “A Block and a Hard Place” literally brought me to tears. The only Telltale Game that ever hit me in the heart like this was episode 5 of The Walking Dead. Thankfully, this experience was not as crushing, but you have been warned. I had mixed feelings about the last episode because it felt a bit like filler but Telltale has redeemed itself here. Episode 4 has the most action and the most story out of any of the released episodes thus far. The Wither Storm is no more and that is not a spoiler because Telltale made that public knowledge. It is time for the people to rebuild but how the story will end is a big question mark. Telltale is going to have to pull out all the stops to top this episode and culminate the story. Look to R.A.G.E. Works for the final chapter of Minecraft: Story Mode as we will be streaming it live when it releases in (probably January) 2016!