Slick’s Nit-Picks: Not a Hero 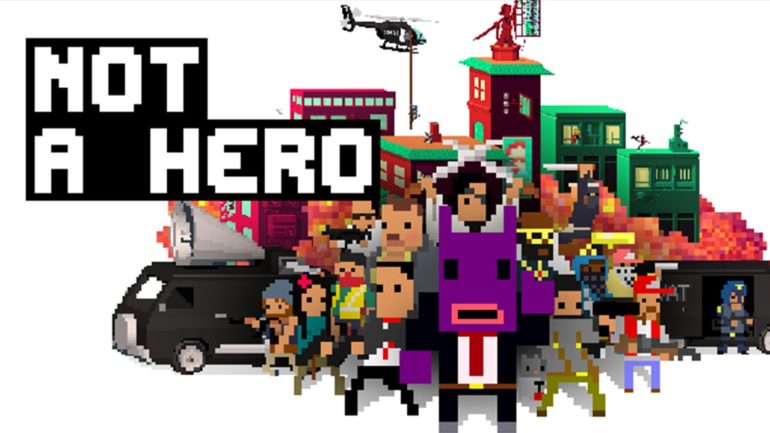 Not a Hero is a miracle of modern science. You might look at it and wonder what the hell I am talking about but listen to me. Not a Hero is a game made by British developer Roll 7 and they managed to release it in 2015 for PC and this year for PlayStation. That does not sound like much but consider that the team is a handful of guys in a mental hospital in SE London clad in “hug me” jackets 24/7. For them, creating a game is a simply amazing feat. Main character Bunnylord wishes to apologize to PlayStation faithful who expected this game to come out in 2015. He even wrote a two-part blog on how difficult it was to code the game for the Vita especially. I ask for the sake of Roll 7 and Bunnylord that you read this blog (links at the bottom). When such an effort is made to create something it needs to be acknowledged, regardless of quality and/or sanity. Bunnylord came all the way from the future just to tell you this tale so the least you people can do is get on PSN and pay the measly $13 for the game. No, I wasn't kidding, go buy the game. You didn't read the review yet? How exactly is that my problem? Whatever, I will wait for you to finish.

THE FUTURE IS NOW! The time is now; the place is Vodkaville, a fake, generic town in England. Bunnylord has traveled through time to save us all. It's the first of the month and if you start singing Bone Thugs N Harmony I will punch you in the soft parts. Bunnylord informs you that the world will end in catastrophe if he is not mayor after the election in twenty-one days. This is how long you have to convince the people to vote for someone they have never heard of. Fortunately, Bunnylord has a plan and it involves you. Well, it actually involves Steve, but for all intents and purposes, you are Steve. Assassin turned campaign manager who never actually gave up killing, Steve is the giant, purple bunny's best friend and wants to see him succeed. The plan is to clean up the crime in the city before he is mayor so that the people will love Bunnylord. Honestly and truly it is not a terrible plan, save for the whole cleaning up the streets not being legal when you are not an elected official or law enforcer. Details be damned, this is the plan and we are sticking to it! Like any politician, Bunnylord's past is not without its skeletons (in his case literally). Some of the crime lords may or may not have photographs that feature someone resembling Bunnylord being not so kind to people and/or animals. The first target is named Bogdan. He runs the syndicate in Vodkaville and looks oddly like Hitler. This is where the simple, yet beautiful plan of Bunnylord comes into play: kill everything. Kill criminals in their ugly faces. Steve is happy to comply. As Bunnylord's approval rating increases, Steve is able to recruit help from up to 8 other colorful psychop… I mean campaign managers. it's time for some real change in the world; it's time for Bunnylord.

PIECE IN OUR TIME As previously stated, carrying out Bunnylord's orders means killing everything in the face. How you accomplish this is really up to you. You begin the game as Steve and are able to recruit help from up to eight others as Bunnylord's approval rating increases. Steve's associates are: Cletus, Samantha, Jesus, Mike, Stanley, Clive, Ronald Justice and Kimmy. Each one has their own personality, weapons, strengths, and weaknesses. The character select board tells you what these traits are and you will switch up unless you become a true master at this game. The great part is that despite having a time limit to ingratiate Bunnylord on the people, you can replay levels to raise the approval rating and unlock these characters. I can tell you I hit a brick wall for a bit after Bunnylord wasted Bogdan because the S.W.A.T. were a bit much for Steve to deal with. I needed the speed of someone like Jesus to escape them. Your enemies are not stupid and once they have noticed you, they will try to overpower you if they have the numbers. They all are relatively smart about taking cover so you will need to use your slide button to do the same. Using cover, going up/down stairs and making preemptive strikes with your secondary weapons are the key to survival. Reloading whenever you have time to breathe is another important factor because the bad guys do not seem to run out of ammo. The game looks simple but it immediately reminded me of the harder levels of the arcade classic Elevator Action, you know, if that game had a baby with Guy Ritchie movies.

As you clear out warehouses full of bad guys, remember to keep an eye on the side objectives at the bottom of the screen. Things like kill x amount of bad guy in x amount of seconds, taking only so many hits or performing x amount of executions. Yes, there are executions in this game. If you slide and trip an enemy, you can stand over them and deliver the coup de grâce up close and personal. There are also critical hits where you blow someone's brains out at point blank range while they are still standing. All this is accomplished with various forms of ammo that you collect and various secondary weapons like grenades, contact bombs and even automatic turrets. I have no idea why this stuff is just laying about these warehouses and what's more, I have no idea why the enemies do not use it against you. Bunnylord prefers that we don't ask too many questions.

NO FRILLS, JUST DEATH The creativity of Roll7 combined with the visual magic of ISO-Slant (which I am dying to try out) make Not a Hero a memorable experience. More and more, I see that developers who come out with these 8-bit style games manage to pull off fantastic visuals despite their simplistic style. Not a Hero definitely falls into that category. From the moment Steve first surprises a group of bad guys, you can see the detail put into the animation. When you stand over someone and perform an execution, whether it be with gun, blade or hammer, there is an almost eerie level of detail in the motions. Beyond just the graphics and animation, Roll7 made sure that Not a Hero is worthy of your home theater system. When I was a child, I played the NES on a 19″ TV that had one speaker. I used to try to connect my stereo through the VCR to get better sound. Roll7 pays homage to that struggle with awesome chiptune music befitting the action and fully voiced characters that spout some outlandish catch phrases. The only character that doesn't speak (words) is Bunnylord and even that is awesome. If you remember the days of Peanuts cartoons where Charlie Brown would speak to any adult, Bunnylord's voice is basically those adult “wah wahhs.” While Steve announces that he goes “Door to door, canvassin' & murderin',” subtitles are a must to understand the Bunnylord and it's a barrel of laughs.

So you might ask me what exactly is Not a Hero? If you have had a bad day at work where your boss was a prick and you want to snap his neck like the cheap pencil it is play Not a Hero. If you are a parent whose child is bullied at school and you are ready to punch an adolescent in the face, play Not a Hero. Let me tell you guys a true story. You might need Google Maps for this one. I live in New York City and one day while driving to work I saw something insane. I am doing 60 on the Grand Central Parkway and pass two guys that had a fender bender. In the middle of this highway, they are having a fist fight. They sure as hell needed to play some Not a Hero! This game is release from stress. The madness in this game can make you laugh at everything, so just enjoy it. When it is all said and done and you have killed a helicopter, executed every last mobster and made Bunnylord the global megalord, you will want to come back for more. You will want to work for Bunnylord again and keep stamping out crime-uh, in the face. You will want back those mornings sipping milkshakes and playing Russian Roulette with him. You will want a sequel and so does Bunnylord. Seriously, this is a very enjoyable, over the top romp that easily could have been an arcade game back in the 80s except for the language and blood. Get out there and get it! Record some speed runs for me. Write fan-fiction about Bunnylord and put your fan art up on that place where deviants dwell. It's $13, you cheap bastard! You spend more than that on stupid map packs! A lot of helicopters, giant rats and Hitler look-alikes died in the making of this game, so make sure that we are able to come back and do it again! Well, don't take my word for it, read Bunnylord's blog below and then you'll feel so guilty that you have to buy this game. Playing this game is good for your health; fist fights on the GCP are not.