Before I really get into this review I have to let off some steam. Nothing against this movie at all really but it’s a shame that films like this can do well while really good ones like Scott Pilgrim are on life support, in terms of box office numbers. That is an argument for a different article but I had to put it out there. The other thing is that if you needed any further proof that 3D is absolutely unnecessary and a waste of a gimmick then you really need to see this movie. When the highlight of your 3D effects is a digitally rendered, dismembered penis being torn apart, eaten and burped up to float out at the audience, well…that one pretty much speaks for itself, doesn’t it?

Casting the gimmick of 3-D aside, this film was surprising in several ways. First of all, it takes a slight departure from the current Hollywood trend of just rehashing that which has already been done. While there have been at least two other killer (little) fish movies, it’s hard to count those because the origin story is always different. That is why I say a “slight” departure – the main action of the movie is always the same basically, just in different locales. The 1981 version was directed by James Cameron five years before Aliens and has almost be the exact same story as Aliens. Piranha 3D seems to unofficially be the sequel to these past two movies even though none of them have anything to do with one another. The film still lacks any real originality but this is one time where that was a good thing and it leads into the other surprising aspect. Piranha 3D is another film that gives me that glimmer of hope that Hollywood’s dangly parts have not completely receded back up inside of itself. This movie is pure homage to the old style of horror we loved back in the late ‘70s through the ‘80s. It’s not torture porn or gore for gore’s sake – it has that “class” of greats like Creepshow, Nightmare On Elm Street and Friday The 13th. To put it simply, if not for the nudity, this would be a SyFy Original Movie of the week. Since there is a large amount of nudity, this would be the type of B-movie you catch on Cinemax at 3AM while channel surfing that you just have to watch.

This movie shines because it follows the paint by numbers rules of any “killer animal in the water” movie. I will not spoil by telling how a fish that is indigenous to South America is living in Lake Victoria (really Lake Havasu, AZ), but it was mildly believable. The appearance of the pack of killer fish unfortunately happens right at the start of Spring Break when thousands of tasty morsels, I uh mean thousands of college kids populate the lake. Enter dutiful local police chief, Elisabeth Shue in this case, doing her best to save the day during the obvious feeding frenzy and you have yourself a winner. For some great movie trivia, find out why Richard Dreyfuss’ character is so significant.

For a B-movie, the cast was surprisingly good but don’t expect any Oscar nominations here. IMDB lists Richard Dreyfuss first and like I said he does have a significance in the movie despite being a cameo. Our (ugh) star is Steven R. McQueen, whose most notable role (to date) is Elena Gilbert’s little bitch of a brother Jeremy in the Vampire Diaries. He’s only slightly more manly in this movie and that’s probably because he doesn’t have any dead girlfriend to cry over. He was likeable in this movie for being somewhat selfless and for (one of) the most cold-blooded acts in the movie not performed by a fish. Elisabeth Shue played the perfect caring mom/no-nonsense cop which kind of reminded me of Elizabeth Mitchell’s character in the current “V” TV series. Christopher Lloyd plays Mr. Goodman (love how he has no first name), who for no reason whatsoever has innate knowledge of the prehistoric piranha that infest the lake (I told you this story was classic). And then we have good ol’ Ving Rhames, aka Deputy Fallon, who is the wisecracking, tough as nails sidekick To Chief Forrester (Shue). He takes a page right out of Alien 3, pulling a Charles S. Dutton style death scene. The cast is rounded out (no pun intended) by Kelly Brook, Riley Steele and Jessica Szohr, who are there to basically be pretty, be busty and in some cases be fish food. Ladies and gentlemen, this stuff writes itself, I kid you not.

(The following is a very spoiler heavy section and I caution readers who have not yet seen that reading this may or may not ruin the experience for you depending upon how you feel about horror movies – also, if you are used to a level of professionalism from me on the site I warn you that it goes out the window for this section only and it will be apparent why if you choose to read on)

This is basically what I want to call the “Why This Movie Is A Must-See” section. Piranha 3D is not worth the price of 3D admission but hey, I paid $6 to see it with glasses on Matinee Tuesday so I don’t care. Do go to see this with a bunch of like-minded friends and prepare yourself to be treated to things like titties underwater in 3D while opera music plays. Pornstars Gianna Michaels and Riley Steele give some of their best performances to date – Michaels in her parasails to her death and Steele is eaten out…but this time from the inside. The piranha somehow manage to leave her implants intact as you get to see them floating when there is nothing left of her. The film also gave new meaning to the term “eating ass” which you may have seen in the theatrical trailer. You will revel in the Mortal Kombat style “BOATALITIES,” one where a guy gets his head taken off between two boats and the other where some panic stricken douche tries to escape by motor boating through the crowded lake, actually killing more people than the fish. his engine stalls as the rotor gets caught in a girl’s hair. He sees her struggling but chooses to restart the motor which pulls her hair and face off. And let’s not forget the excellent fatality where an amp cable snaps, flies across the lake and tears a girl’s chest in half, giving that wonderful slide off effect. Piranha are cock-munching little bastards, and that is all I have to say about that. Ving Rhames realizes that only an effing moron uses a shotgun to try to kill something that is underwater so he rips off an outboard motor and starts making some Lake Victoria style Paella minus the rice. In the world of Piranha 3D you must stay on dry land if you have big titties, especially if they are fake – these seem to attract the fish even more than blood. No flat-chested women were hurt during the filming of this movie. I end this section with a lesson in stupidity. If you are in the water, surrounded by murderous fish, please remember to make out with the girl you like instead of actually making your way to safety. 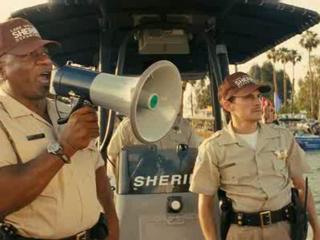 I am happy to say that this was a fun movie. It reminded me of earlier films when horror movies did not have to be about shock value or intense levels of gore. A time where someone getting eaten alive could be construed as funny because their dumbass did have prior warning. Piranha 3D makes fun of itself and of every “serious” horror movie out there now just by saying “look how well I am doing.” It only made it to sixth place in the box office top ten during its opening weekend but for a B-movie, that is saying something. The movie had a budget of $24 million which could only have been spent on the fish and making the movie 3D. It opened this past Friday and made $10.1M during the opening weekend (according to IMDB.com). A sequel has already been greenlit and shockingly, based upon the plot and the ending, a sequel actually makes sense. Bottom line is that there are some really good movies out this summer, but if you have seen them all then it is time to dumb it down a bit and go see this flick. What else are you gonna watch, “Vampires Suck?” 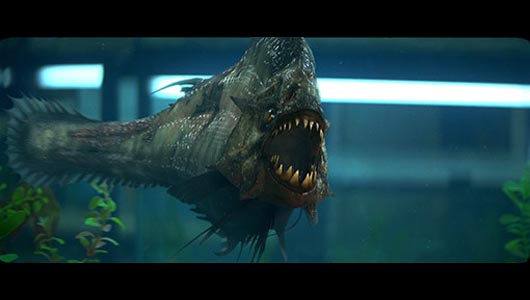