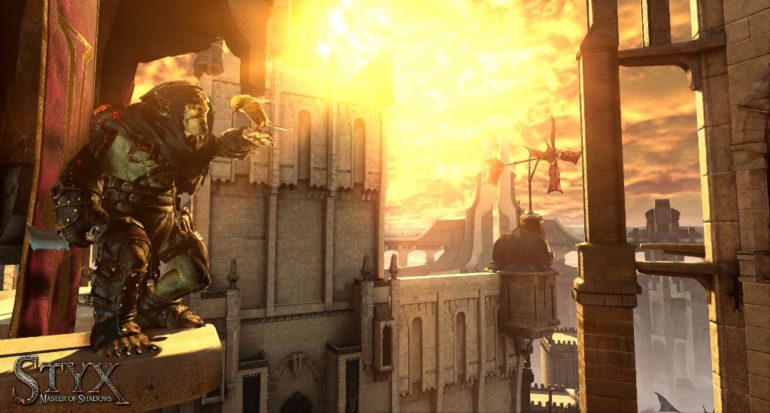 The arrogance of man is a folly we never seem to learn from. No matter how many times nature humbles us, as a people, we never seem to get the concept that there are things we should not mess with. Our curiosity is without bounds and yet there seem to be things that we were not meant to understand. Often we relegate things like that to the realm of fantasy. Beings that are there but not; things that we see out of the corner of the eye that disappear into shadows when we take a good look. Every now and again someone stumbles on something fantastical and the most common human thought is to exploit it. This is where we go wrong and usually end up with the short end of the stick. This is where our tale begins as Cyanide Studio and Focus Home Interactive invite us to go where man is not welcome – into the shadows.

SILENT BUT DEADLY Forget the saying “good things come in small packages,” because Styx is anything but good. Unlike most goblins, he acts alone and overcomes the cowardice befitting his size with guile and stealth. Having lived for over two hundred years now he has taken many lives and more will fall to his blade before this deed is done. What he wants is the lifeblood of the World Tree, the amber, that flows both through his veins and throughout the Tower of Akenash that surrounds the tree. Quietly he laughs at the humans that built the tower around the tree to try and possess its power and secrets. He knows the elves will not stand for their arrogance forever but even before that, he will reach the heart of the tree and steal it for himself. His obstacles vary in size, but they are all bigger than him; even still, there is nothing that shall prevent Styx from achieving his goal. 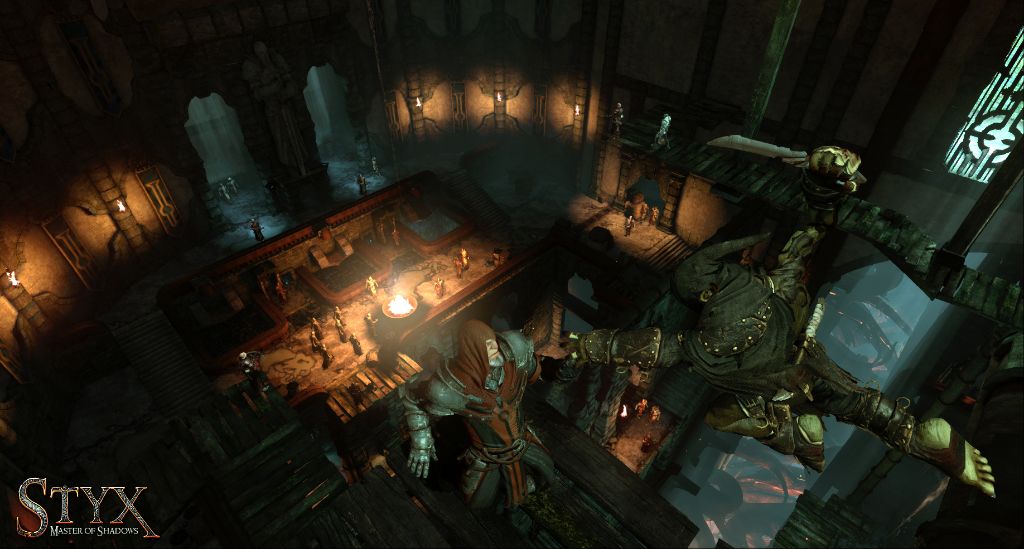 SKILLS THAT LEAD TO THRILLS Styx is both thief and assassin by trade, so his primary weapon is stealth. He can and will defend himself when necessary, but his best defense is leaving an area without anyone knowing he was ever there. Well, at least, anyone that is still alive when he leaves an area. When an enemy’s back is turned, it is very simple for Styx to dispatch them, as long as no one else can see him. He has six different skill trees, all of which should be developed using the skill points you acquire, that make exploration of the Tower both easier and more fun. Stealth, agility, cloning, amber, equipment and assassination are the skills you must develop and they are all useful to you as you progress. Styx is pretty handy from the start; his jumping and climbing skills are very good, something many games have lacked lately. Crouching (which you will do very often) keeps enemies from hearing him and his diminutive size lets him hide in the smallest of spaces. His blade can dispatch almost any enemy but don’t think that you will be able to take soldiers head on. Many will yoke Styx with one hand and slit his throat with the other, especially on Goblin difficulty. This can be especially annoying as death often means starting from the beginning of an area, losing anything you have picked up. Regardless of that headache, many will enjoy Styx for the way it lets you play. Each level has a set goal, but how you achieve it is up to you. One person may kill guards the old fashioned way with his blade and another may choose to drop a chandelier or a suspended load on them. Your clone also makes for very crafty decisions as it can serve as bait and even dispatch your foes in some situations. If you really want to challenge yourself, you might see how far you can go without being noticed using stealth. Styx may be virtually invisible in the dark (your tattoo glows with Amber so you do not get lost), but he can actually turn invisible as well. Easily the most satisfying aspect of this game is that all of Styx abilities are valuable; you may or may not use them as the game allows you to customize your own path to the goal. This grubby little imp should definitely find his way into your gaming library.

STYX NEEDS HIS BEAUTY SLEEP Styx the goblin is ugly, in pretty much every sense of the word. Fortunately, his world is a lot easier on the eyes. This game is not going to win any best graphics awards, but the attention to detail cannot be ignored. The Tower of Akenash is not a pleasant place to be in, even if you are supposed to be there. Every time you see an amber pod with a body in it, you get that feeling like when you see a Xenomorph egg open up.  The tower itself is a giant 3D maze that begs players to challenge and explore its every fringe. If it feels a bit drab and dank as you move about, that is because it is supposed to be. Lighting is used creatively to set the mood of the game and will sometimes clue you in on how to best approach an area.  The rogues’ gallery is not terribly diverse but that is fine because you should probably kill or avoid anyone that you meet if they are not clearly an ally. Not every character can kill Styx, but if he cannot, it is likely that his buddy can. Soldiers are easily recognized by armor, weapons and the fact that you can hear the clang of metal when they move. You know right away that you need to deal with or avoid them. Craftsmen, servants, scientists, etc. are those you decide whether or not to spare but have to be aware that they can alert more dangerous characters to the area. When you have extinguished all of the torches in an area or if it is just too dark to see ahead, the amber vision comes into play. Think Batman’s scan mode or using Spider-Sense from recent games, but with less detail. In total darkness, the tattoo on Styx’ back is all you have for illumination, so the amber vision can alert you to hidden items and enemies. The visuals are all packaged together by a solid framerate on the PS4. I have heard that Steam players have had issues with the framerate, but this is usually resolved by adjusting GPU settings. The PS4 would almost undoubtedly have a lower rate than a high end gaming rig but the animation is smooth and fluid throughout the adventure; no complaints on my end.

Goblins in general have a reputation for being annoying little bastards. The one thing that is annoying about Styx: Master of Shadows is that if you die (and you will die), you have to start from the beginning of the area that you are in. That is a fact that can be extremely frustrating. Then again, I just looked at it as a greater challenge. When I review a game, I always play it on the hardest available setting because I want a game to throw everything it has at me. This way, I feel that you as the reader will really know what they are in for if they pick the game up. The Tower of Akenash, as  I said earlier, is a maze. However, it is also a giant collection of challenge rooms. Styx is barely bigger than a Smurf and everything he takes on is daunting in size to him. Checkpoints would honestly make this game too easy. Developers also want players to play their game more than once. If you try to collect all the goodies the tower has to offer on your first try, you are most likely going to die near the end and have to start over, as many players before you have. Styx invites you to be careful and methodical about your actions. A good thief will thoroughly examine the area he hits before the actual job. A good assassin will likely do something similar, if for no other reason, to plan a proper escape. Your character is both and you should keep that in mind if you try to run through like Leroy Jenkins because you will die like Leroy Jenkins. For $30 ($27 for PS+ members), Styx gives you a game that could easily go for full price as it is longer than a lot of current titles. The story is somewhat basic, but engaging enough that players will want to see it through. While it may not be scary, it still has the same margin for error as a recent “isolated” game. As a current gen only downloadable title, it is a very good entry from Cyanide Studio. The graphics could have been better, but that is never a huge complaint from me when the game is technically sound and truly enjoyable overall. If you have ever seen the movie “Groundhog Day,” you will get that feeling (guaranteed), but that just prompts you to get better so that you can break the cycle. If you like games like the stealth elements of games like Batman, Spider-Man and even Hitman and Thief, then I strongly encourage you to become a Master of Shadows.